The high point of British support for Europe arguably came in 1975, two years after the country joined what was then called the European Community (EC). Since then, the British have slowly soured on European integration.

In 1975, the British voted 67 per cent in a referendum in favour of the EC. When a major polling firm asked in that year whether the European Community was a "Good Thing," half of the population said yes. Even the major papers, many now hostile to Europe in general and the European Union in particular, favoured British entry.

For the next four decades, support for Britain in Europe and British views of the European Community rose and fell, but the general drift was down. The idea that Thursday's referendum on EU membership, with so many British wanting to leave, represents something new is false. There are fresh drivers of opinion – migration and inequality – but Britain never had a love affair with Europe. It was a loveless marriage of convenience.

The last prime minister who genuinely believed in the virtues of the EU was Tony Blair. Since Edward Heath, Margaret Thatcher's predecessor as prime minister who negotiated Britain's entry into the EC, most prime ministers have been lukewarm defenders or frequent critics. None of them, except Mr. Blair, tried to make the case for Europe as anything more than a utilitarian arrangement, a balance sheet.

The British did not change, but the European Union did. On the continent, the original six countries that created the European integration project always wanted tighter political union, which meant social policies, common laws, trade negotiations conducted by Brussels and later, of course, a common currency. The British never bought into a tighter political union and stayed out of the euro zone.

Europe changed for two other reasons. German unification made Germany an axis around which the EU would turn. The old French-Germany axis faded, as France slipped as an economic power in comparison with Germany, and Germany was thrust into the role as the EU's leading political actor, a role Germany did not want.

Then the Iron Curtain disappeared. The countries of Eastern Europe, desperate to throw off the shackles of the Soviet-imposed Warsaw Pact (the military alliance) and Comecon (the economic bloc), hungered to join West European institutions. The Cold War ties that bound the West, including the European Community/Union, yielded to wider but less easily defined communalities.

When these new countries were allowed in, Europe became more complicated. It was subject to new pressures and demands, including the right of free movement that sent citizens from these countries heading to Britain for work. These countries were geographically removed from Britain, unlike the countries across the English Channel.

The first European institutions were established in the aftermath of war, and were therefore designed to preserve peace. These institutions succeeded brilliantly, but success was taken for granted as the decades passed. The wartime generation died. Subsequent generations simply assumed peace.

British diplomats often shone inside the institutions of Europe, but the shining was unknown outside the walls of the Berlaymont building, the EU headquarters in Brussels. Back home, the diplomats were depicted in the rabidly anti-EU British press as putty in the hands of the continentals and, worse, connivers with the continentals in supranational schemes.

When two crises washed over the EU, the institution struggled to respond, and that struggle further soured British opinion. The first was the made-in-America financial crisis; the second was the mass migration from failed states and economic basket cases from Bangladesh to Algeria.

Neither of these were the EU's fault and no easy answers presented themselves for these two nasty crises. Moreover, the British perception of being overrun by migration – a perception fuelling a desire to leave the EU – had much more to do with Britain's colonial past and domestic immigration policies than EU membership.

So after decades of drift away from the European idea, with few voices of prominence ready to speak positively rather than defensively about the European project, Britain wobbles to a fateful decision.

Five things to know about Canada and Thursday's 'Brexit' vote
June 22, 2016
Brexiteers dream of the past but forget the economic nightmares
Subscriber content
June 22, 2016 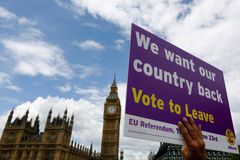