Through most of his time as federal finance minister, Jim Flaherty's relationship with his home province's government appeared to be nothing short of toxic.

To listen to Mr. Flaherty's intermittent public rants, Ontario was "no longer the envy of the country" because of its "lack of leadership"; it was "the last place" in Canada to make a new business investment if you were concerned about taxes; it was potentially deserving of a downgrade to its credit rating; it suffered from fiscal mismanagement that made it "a problem for the entire country."

Setting aside the merits of these criticisms, they were highly unusual coming from someone in his position. And they were widely seen to be detrimental – proof that the former Ontario treasurer was unable to set aside his bitterness about how his own career at Queen's Park had panned out and work constructively in the province's and country's collective interest.

Those who worked directly with Mr. Flaherty and his office at the intergovernmental level, however, told a different story.

Staff for Ontario finance ministers whose tenures coincided with Mr. Flaherty's in Ottawa, notably Dwight Duncan and Charles Sousa, tended to praise him for being pragmatic behind closed doors – so much so that rather than cheering his exit, some provincial officials are just hoping they will be able to forge as productive a relationship with his successor.

In general, they point to two major examples of how they were able to work collaboratively with Mr. Flaherty – both of them ambitious policy files that had long been bandied about by both sides, but seemed to have too many hurdles to ever really move forward on.

The first, and at least to this point more substantive, was the establishment of a harmonized federal-provincial sales tax. Following perhaps the worst of the back-and-forth blame game they played out in the open, Mr. Flaherty and Mr. Duncan were able to set aside their differences during the 2008-09 recession to hammer out details of an agreement aimed at making it easier to do business in Ontario.

Mr. Duncan and then-premier Dalton McGuinty deserve a big share of the credit for that cooperation; they were the ones who undertook the bigger political risk, and wound up doing most of the heavy lifting in terms of selling it. But Mr. Flaherty did his part to make it happen, including being reasonably flexible on concessions that would help the province make its case to a skeptical electorate.

The second was last year's agreement for Ontario to form a common securities regulator with British Columbia. It was a modest but significant step toward a national regulator – something Queen's Park considers important to the growth of Toronto's financial sector. And while they say it was Mr. Sousa who took the lead on achieving the half-measure, provincial Liberals credit Mr. Flaherty for long championing the cause, and for again proving agreeable to compromise when push came to shove.

Along with these relatively high-profile instances of cooperation, Ontario finance ministers seem to have been able to pick up the phone and have cordial conversations with Mr. Flaherty about more mundane matters – including the various federal-provincial funding disputes about which they sparred publicly.

That, as much as anything, points to the true nature of the relationship. To be sure, Mr. Flaherty could be irascible and impetuous; he may well have retained a hint of bitterness about those provincial disappointments of his own, including a forgettable stint as Ontario's treasurer and a pair of failed bids for the Progressive Conservatives' leadership. But he also saw value in a good dog-and-pony show, and he wasn't alone in that.

Federal and provincial governments frequently find benefit in serving as each other's foils, and there was particular upside to doing so after the 2008 crash. The federal Conservatives needed to reassert their fiscal hawkishness, and pot-shots at Ontario's comparatively large budget deficits could help. The provincial Liberals needed to shift some of the blame for those big shortfalls, and for the related need for spending restraint, and complaints about a raw deal from Ottawa – not to mention Mr. Flaherty's ostensible bullying – couldn't hurt.

It is a fair bet that the latter such gripes, at least, will continue to be directed toward Joe Oliver, Mr. Flaherty's replacement. Less certain is whether Mr. Oliver will respond in kind.

Although known for being a shade cantankerous himself, he could attempt to play the more dignified role of federal finance ministers past. But Queen's Park would probably be perfectly happy for him to follow his predecessor's lead by being nasty in public and nice in private, rather than the other way around. 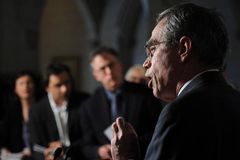 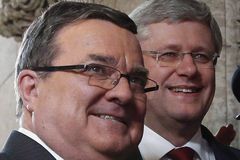 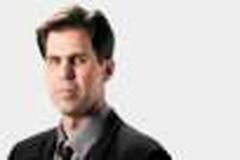