The first kind are mostly newcomers, the fresh faces supposed to embody the Liberal promise of real change and bring the party's platform themes forward.

Bill Morneau, a former business CEO, is Finance Minister, but there's also Amarjeet Sohi, a former Edmonton city councillor who is now Infrastructure Minister, tasked with fulfilling the promise of a major expansion of infrastructure spending to launch a building boom in towns across the country. Catherine McKenna, an Ottawa lawyer, is the Environment Minister who must soon quarterback a new approach to climate change at global talks in Paris, and with provinces.

Many of the big governing themes Mr. Trudeau's Liberals promised – like stimulating the economy and greening the country – were entrusted to new faces such as Mr. Sohi and Ms. McKenna, who also represent diversity and, Mr. Trudeau boasted, "look like Canada."

But there's another group, mostly experienced cabinet hands, whose tasks often involve handling thorny problems inside the machinery of government.

Ralph Goodale, who has held four cabinet portfolios, was named Public Safety Minister, charged with balancing the security concerns of police and intelligence agencies with Liberal promises to add oversight and accountability. He'll also have part of the job of meeting the promise to bring in 25,000 Syrian refugees by year-end – a responsibility that mainly falls to another veteran, Immigration Minister John McCallum, an economist who knows the refugee file and served as minister of defence.

There's Nova Scotia's Scott Brison, the one-time public works minister who co-chaired Mr. Trudeau's economic advisory council. He's a quick-tongued debater who could have handled a major economic portfolio like Industry or Finance. Instead, he's Treasury Board President, responsible for internal government workings and vetting the costs of projects proposed by other ministers.

The two big economic portfolios that deal most with the public and Canada's business community go to fresher faces – Mr. Morneau and Navdeep Bains, a smiling 38-year-old who was an MP before, from 2004 to 2011, but isn't a familiar figure to most. Mr. Bains has a rebranded Industry portfolio, now called Innovation, Science and Economic Development – a name meant to invoke a new-economy mission.

They were part of the crafted symbolism of the day – and this cabinet was sworn in on a stack of symbols.

It started with Mr. Trudeau's walk with his new cabinet up the Rideau Hall drive, lined by well-wishers from the public, meant as an emblem of a new, open style. There was 50-50 gender balance, ethnic diversity and two aboriginal ministers, including Jody Wilson-Raybould as Justice Minister. It ended with ministers speaking to reporters after a cabinet meeting – symbolically, because most said little.

Mr. Trudeau, himself a newish face who promised to be a more co-operative PM, named himself Intergovernmental Affairs Minister. He also named himself Minister of Youth.

It was supposed to look not like a change of parties, but of generations. That's why new faces went with new themes.

It wasn't a universal rule, of course. But there was deliberate placing of the six experienced ministers out of 30.

Mr. Trudeau had no obvious choice for Foreign Affairs Minister, typically a senior figure who doesn't require micro-management; he picked Stéphane Dion. Dominic LeBlanc, who hadn't sat in cabinet but has been an MP for 15 years, is the House Leader who will steer the legislative agenda.

Scratch deeper, and newcomers have real weight. The major cabinet committee – once called Priorities and Planning, but now renamed Agenda and Results – consists of Mr. Trudeau, Mr. Goodale and nine ministers who have never sat in cabinet before. But veteran ministers are in charge of half the committees that aren't chaired by Mr. Trudeau.

It's a sign that Mr. Trudeau picked his cabinet with purpose among symbols. Veterans got jobs that require working complex levers inside government. The newcomers carry the portfolios that look out to the public, and his promised future.

The Trudeau cabinet: Read the full list of ministers
November 12, 2017 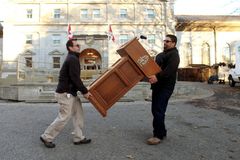