It was the subject of an emergency House of Commons debate that ran until midnight Monday, and of an announcement Tuesday made by a pair of prominent cabinet ministers flanked by two dozen Conservative caucus members.

A meeting regarding the issue was on Prime Minister Stephen Harper's schedule Thursday afternoon, and it will be the subject of a government consultation with community leaders on Friday in Toronto, too.

The situation in Ukraine – and Ottawa's response as it unfolds – has been at the fore this week, with the Conservative government announcing it will bar from Canada any key Ukrainian officials who are responsible for the "repression and silencing" of opposition voices.

Demonstrators continue to call for the resignation of President Viktor Yanukovych, who is under fire for shunning a deeper association with the European Union in favour of closer ties with Russia, and who on Thursday evening announced he was going on sick leave.

The Globe and Mail spoke with Immigration Minister Chris Alexander, who announced the travel ban Tuesday, about Canada's response to the tumult in Ukraine.

Are the travel provisions about revoking existing visas, or about prohibiting visas to certain people from now on?

They could involve revoking visas for those who have them, and that would be more likely if someone on the list had a multiple-entry visa. But for the most part it involves not issuing visas. We would simply not grant it to anyone who was targeted by our travel ban because they were directly responsible for the violence.

Which individuals are barred from entry? How did the government decide on who to target?

They are people at all levels in the current regime. We're not specifying who they are. It's certainly more than a handful. The information on which we base this is accurate and validated, but new information is coming in at all times. So if there's further violence and new information that someone else was involved, we will be adding them to the list. We are deliberately keeping the names on the list and the size of the list to ourselves, both because it will change over time and because we want to deter further violence.

Why doesn't the government go ahead with targeted sanctions or an expedited visa regime for vulnerable people, as the opposition parties and leaders from the Ukrainian-Canadian community have advocated? What's there to lose?

We're looking at all options. We're following the situation closely and we'll continue to consult with our allies. The crisis has not ended, nor has Canada's response. When it comes to ensuring our asylum system is available to anyone who is facing active persecution, that almost goes without saying. We're bringing students here and representatives of the democratic movement, and we will expedite cases where we think it'll help in the circumstance.

Does some of the hesitation around, say, targeted financial sanctions stem from concerns that too much western retaliation could push Mr. Yanukovych closer to Russia?

First, there's no hesitation about helping the democratic movement. We actually have faster processing of visitor visas in Kiev than we do in almost any other part of the world, and that's going to continue. Second, we don't want any steps that we take to punish the Ukrainian people – to punish innocents or worsen the prospects of economic growth and democratic prospects in Ukraine.

How much does Russia play into Canada's decision-making on this issue?

We've been very clear. The crisis and the protests were mostly occasioned by [Mr. Putin's] own interference. He seems to forget that he is head of state of a foreign country. We have no hesitation in pointing that out.

What has been the most poignant moment for you on this file so far?

I'm struck by the depth of knowledge and commitment, throughout Parliament and all parties, and especially in our caucus. It's a big, international issue – for Europe and for the world. That moves me. I was also struck by how dedicated Canadians are. I've been to two gatherings with the Ukrainian Canadian Congress and other Ukrainian-Canadian organizations, and they were both in blistering wind and frigid temperatures, and yet everyone wants to be there. There's a sense that this is the right thing to do: that if Ukrainians are being denied their freedom of assembly, then that is exactly the time for Canadians to use theirs.

Were you at the meeting Thursday afternoon, when the Prime Minister met with leaders from the Ukrainian-Canadian community?

I wasn't, but John Baird and I will be meeting with some of the same people and others in Toronto tomorrow at a roundtable. There will be a very strong, representative group of people, including some who are recently back from Ukraine. It's an opportunity to deepen and update our understanding. It's so valuable for us to hear from people who are tuned into this 24/7.

What do you make of news that Mr. Yanukovych has taken sick leave?

Diplomatic illness is one of the oldest tactics in the book, but we'll have to wait and see what's behind it.

Kathryn Blaze Carlson is a parliamentary reporter in Ottawa. 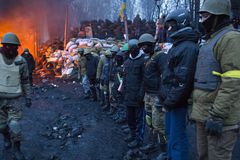 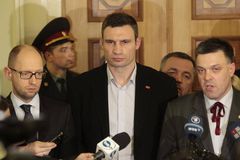 The Globe in Kiev: Amnesty offer likely not good enough for protesters
January 29, 2014 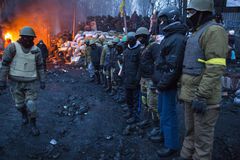 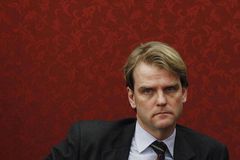 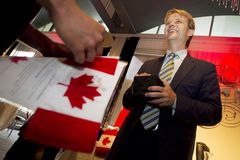