Thomas Mulcair made it clear this week that he plans to go negative in his bid to steal seats from his rivals.

The NDP Leader and his team face a big fight in the Nov. 25 by-election in Bourassa, a riding that has been mostly Liberal since its creation in the 1960s. But it's a tempting prize for a party that holds a large majority of seats in Quebec, and needs to add to its tally to win the 2015 general election.

During the 2011 Orange Wave, the NDP seized what were then seen as the strongest of Liberal strongholds, such as Hull-Aylmer in western Quebec or Pierrefonds-Dollard on Montreal's Western Island. Mr. Mulcair himself entered the House of Commons in a 2007 by-election by stealing the riding of Outremont from Liberal hands.

It is no surprise that Mr. Mulcair, who won the NDP leadership in 2012, is going all-in to capture Bourassa, a relatively poor and highly diverse riding on the northern edges of Montreal Island.

However, going negative is always risky. While former leader Jack Layton never shied from attacking his adversaries, negative advertising doesn't always fly within NDP circles. In addition, it reinforces the perception that Mr. Mulcair has a go-for-the-jugular approach to politics.

In addition, the latest NDP attack is reminiscent of a recent string of Conservative attack ads, going as far as using glitzy type describing what the NDP calls "Club Privilège Libéral."

Still, the campaign is a clear sign that the NDP is in this battle to win, or at least wound Justin Trudeau's team. On Tuesday, knowing that the Liberal Leader would be in the riding, the NDP unveiled a new website and installed attack signs in key parts of Bourassa.

The campaign lambastes the Liberal candidate, Emmanuel Dubourg, for taking a transition allowance of $100,000 when he quit his seat in the National Assembly mid-mandate to run on the federal stage. According to the NDP signs, Mr. Dubourg is now a member of the Liberal "club," which takes care "of its friends first."

"There is nothing too good for the privilege class," the NDP signs says.

One of them was placed just in front of the entrance of the banquet hall where Mr. Trudeau held a rally with hundreds of Liberals on Tuesday evening. Another one was placed in front of Mr. Dubourg's campaign office.

The NDP obviously touched a nerve. Video footage provided to Sun News shows there was a camera positioned in front of the Liberal HQ in Bourassa, which captured party officials tearing down the sign this week in apparent contravention of electoral rules.

It is clear that tempers are frayed. On Tuesday, Liberal organizers – without any video proof, however – accused the NDP of bringing down Trudeau-Dubourg placards to make room for their own attacks.

Mr. Mulcair defended his decision to go on the offensive, stating that the message was factually accurate and objective.

Still, one of the reporters who is quoted on the NDP website as attacking Mr. Dubourg wrote a blog post on Wednesday to state that his words were taken "out of context."

Radio-Canada political analyst Sébastien Bovet said he had presented both the pros and cons of Mr. Dubourg's decision to accept the allowance. As Mr. Bovet said, "the NDP cut corners."

"The quote that was selected by the NDP was obviously among the arguments against the allowance. However, I also presented three arguments in favour of the allowance," Mr. Bovet said. 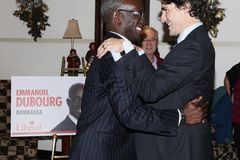 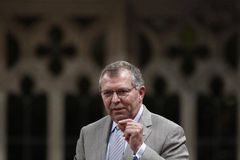