It's the gazillion-dollar question of Confederation, and Justin Trudeau has to squeeze through the middle.

It will be burning in the backs of the minds of premiers as they meet him to hammer out a climate-change deal. The question is how much health-care money they'll get from Ottawa, and it's a high-stakes issue for every premier because it is crucial to provincial budgets.

But Mr. Trudeau now faces two political imperatives when it comes to health funding. One is to provide more than his Conservative predecessor, Stephen Harper, was planning. The other is to trim the annual growth in health transfers from the unsustainable six-per-cent increases of the past decade.

For all the posturing that first ministers put into this big money game, the premiers know those are the limits. They keep asking Mr. Trudeau to continue those increases, but they know he won't.

They've even suggested that Ottawa could delay a full health accord and, in the meantime, extend the increases for another year. But accepting that means accepting the notion that six-per-cent increases are the new normal. Mr. Trudeau can't afford that.

He faces a budget deficit and forecasts for years of slow economic growth. Six-per-cent increases would make federal health-care transfers to the provinces grow and grow, from $36-billion this year to almost $65-billion a decade from now. That's like adding the entire defence budget to federal health transfers. If Mr. Trudeau doesn't slow down the rate of increases, they'll squeeze other things out of the federal budget.

The problem is that politically, he has to offer more than Mr. Harper. The former PM had said he would tie health transfers to economic growth, with minimum increases of 3 per cent per year. Lowering the annual growth from 6 per cent to 3 per cent would make a massive difference – in a decade's time, Ottawa would transfer about $16-billion less each year.

But Mr. Trudeau can't stick to Mr. Harper's plan. He spent the election campaign blasting Mr. Harper as a take-it-or-leave-it PM who wouldn't even discuss his decrees with premiers. He can't go with Mr. Harper's health-funding diktat now – it would jeopardize his support with left-leaning voters.

Mr. Trudeau's government has promised to inject an extra $3-billion over four years into home care, as long as the provinces sign on to an agreement on offering home-care services. But in relative terms, it's not a massive amount of money, and it would run out in four years. It's not enough to push them to really revamp home care.

Mr. Trudeau has a lot of reasons to offer more. For one thing, he and his Health Minister, Jane Philpott, really do want to encourage provinces to expand home care and mental-health services. And Mr. Trudeau wants provinces – or at least most of them – to praise him for taking a more collaborative approach than Mr. Harper. There will be more.

Publicly, Dr. Phillpott has suggested there's little coming. She annoyed provinces by noting that in recent years, provincial health budgets went up by 2 per cent, while federal transfers rose by 6 per cent each year. Some provinces bristled that they should not be punished for controlling costs. Several provinces say their costs are again rising more quickly, by 4.5 to 5 per cent per year. They want federal transfers to increase at the same pace.

Some provinces think the federal government could do that by making their four-year injection of home-care money permanent, adding $750-million a year to transfers. Others want Ottawa to offer larger annual increases – either way, they're targeting a deal that would effectively see health transfers rise by 4-to-5-per-cent annually. They'll split the difference.

For Mr. Trudeau, that's the price of a deal. This week's first ministers' meeting is focused on climate change, but at the end of it, he'll play host to a Friday-night dinner with premiers to discuss health care. The point is to show he's willing to talk with premiers – and you'd imagine his message to provincial leaders is that he expects to get credit for that from them, too. But he has to take the middle path: financially, he can't afford six per cent, but politically, he has to offer more than Stephen Harper. 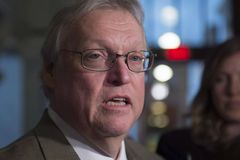 Ottawa may have to pay for carbon credits to meet climate targets
April 11, 2017
Follow Campbell Clark on Twitter @camrclark
Report an error Editorial code of conduct
Due to technical reasons, we have temporarily removed commenting from our articles. We hope to have this fixed soon. Thank you for your patience. If you are looking to give feedback on our new site, please send it along to feedback@globeandmail.com. If you want to write a letter to the editor, please forward to letters@globeandmail.com.
Comments