The Ontario high-school teachers' union is planning to discuss a bargaining strategy and consider a new levy to bolster its strike fund, a clear signal educators are preparing for a lengthy battle with the province regardless of which party is in power after June 12.

Parents and students who vividly remember last year's teacher walkouts and the loss of extracurricular programs may find it alarming that more than 550 Ontario Secondary School Teachers' Federation members will hold a special meeting next Saturday.

And the union is adamant that teachers will not accept more pay cuts. "I don't expect to walk to the table and have to bargain against myself. I expect there to be some money on the table," Paul Elliott, the union's president, told The Globe and Mail.

Other teacher unions are not backing down either.

The Liberals under Kathleen Wynne entrenched a new bargaining process for teachers before the election was called. But after the events of the past year, both teachers and school boards are expecting long, painful labour negotiations. Teachers' contracts expire in August, and bargaining usually begins in earnest as the contract is reaching its end.

Already, Tim Hudak's Conservatives have angered teachers with a platform of increasing class sizes, reducing teaching and non-teaching positions, decreasing staff in full-day kindergarten, and freezing pay. There has even been talk of axing a 2 per cent wage bump for public elementary school teachers, money that would have allowed them to catch up with their high school counterparts (the Elementary Teachers' Federation of Ontario lost out on 2 per cent in the 2008 round of bargaining because it failed to meet a deadline for accepting a contract offer).

"If the Conservatives get in, I have a feeling there will be no bargaining. From everything that I have read in their platform, he [Mr. Hudak] does not intend on bargaining with the public sector. He intends on stripping," Mr. Elliott said.

That could spell trouble for Ontario students and cast uncertainty over the upcoming school year.

Even if Kathleen Wynne's Liberals or Andrea Horwath and the NDP are elected, the showdown will be tense as the government of the day grapples with a large deficit.

The Liberals have tried to win back the support of teachers under Ms. Wynne, especially after the instability her predecessor, Dalton McGuinty, caused in the public school system through Bill 115, controversial legislation that continues to haunt the Grits and diminished their standing with teachers, who have long been part of the party's electoral coalition. The bill infringed on collective bargaining rights, restricted the ability to strike and imposed pay cuts through unpaid days. Teachers withdrew extracurricular services in protest.

Ms. Wynne introduced Bill 122 to calm the waters. The legislation, which is now law, defines how the bargaining process will work: Big monetary issues, such as salaries and benefits, will be negotiated centrally by the government, provincial unions and school board associations; bargaining on local issues, such as teachers' workload, access to technology, and training, would take place between individual school boards and their unions.

But the Liberal budget that triggered the election was anything but hopeful for teacher negotiations. While it did not contain cuts to education, it lacked new funding. And the Liberals extended a wage cut imposed in 2013 that would go well beyond the agreed two-year term. That reminded teachers of the unilateral imposition of Bill 115.

The fear in education circles is that Ontario will be in the same toxic environment as British Columbia.

An escalating and confrontational labour dispute has put B.C.'s school year in jeopardy. The provincial government backed away from its goal of a 10-year deal and offered a six-year contract and a signing bonus if it was accepted before the end of June. Teachers started a job action in April, refusing to perform some administrative work. Rotating strikes are due to begin on Monday. The government and the B.C. Public School Employers' Association said it will impose a partial lockout and dock pay.

Michael Barrett, president of the Ontario Public School Boards' Association, said if the province enters negotiations and teachers want increases similar to what their counterparts in British Columbia are seeking – 13.75 per cent over four years – the negotiation process will be stalled.

"It's still going to be as controversial. The only thing I would say is different is at least there's going to be a table we're all going to be sitting at," he said. "And at least two of the three parties will be having some discussion."

The issue is that third party – the new Ontario government – will have to dig deep and show some goodwill. If it doesn't, the OSSTF's new levy will be put to use, and parents and students will be in for another round of chaos. 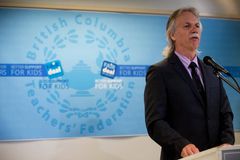 British Columbia to lock out teachers beginning Monday
May 21, 2014 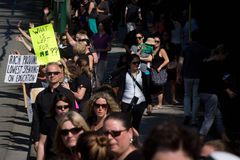