Stephen Harper cards at the 2016 Conservative Party Convention in Vancouver on May 26, 2016.

Last year, John Ibbitson literally wrote the book on Stephen Harper's rise to power and how he changed conservatism in Canada. Then came the election that ended a decade of Tory rule. Now, as he leaves federal politics, it's worth acknowledging his lasting legacy: A constitutional Pax Harperana

As Stephen Harper said goodbye Thursday to the party he created, and prepared to leave public life completely, conservatives and progressives competed to define his legacy, pro or con. Yet, posterity may best remember Mr. Harper for something few today even notice: He made Canada a true federation.

During his nearly 10 years as prime minister, Mr. Harper greatly reduced the scope and power of the federal government by limiting its ability to raise funds and by retreating from areas he believed were best managed by the provinces.

He ended six decades of competition between Ottawa and the provincial capitals for dominance over the national agenda by having Ottawa surrender the field. The federation today is more truly federal – with each order of government carrying out its constitutionally defined responsibilities – than at any time since the Second World War.

This change is likely to be permanent. Those who believe that the Liberals are rolling back the Harper legacy either don't realize or willfully ignore that this, above all, is his legacy – one that his successor, Justin Trudeau, has accepted. This is why it is right to say that Stephen Harper changed Canada.

From the late 1940s until Mr. Harper took office in 2006, Ottawa sought to tie Canada together through federally initiated programs in areas that constitutionally were the job of the provinces. In the 1960s and 70s, this led to a suite of programs that still anchor this country's social safety net.

But it also led to endless wars between an ambitious federal government and provincial governments that resented the intrusion. And when money became tighter in the 1980s and Ottawa pulled back funding for existing programs, only to propose new ones, provinces fought back, vowing not to be fooled again. This led to wars over the Constitution, endless squabbling over funding and responsibilities, and dangerous levels of alienation in both Quebec and the West. In the 1995 Quebec referendum, it almost cost us the country.

Mr. Harper put an end to all this. First, he tied the federal government's fiscal hands by cutting the GST and by lowering other taxes so substantially that when he left office, Ottawa's share of the gross domestic product was down where it was in the Diefenbaker era. If you don't feel your taxes have gone down, that's probably because your provincial government moved in to occupy the tax room vacated by Ottawa by increasing taxes. When done openly, academics call this a tax-point transfer. Mr. Harper engineered a tax-point transfer by stealth.

He also reshaped the federation by refusing to intrude in health care, education or other areas of social policy that properly belong to the provinces. To critics who accused him of abandoning Ottawa's responsibility to knit this fragile country together through national programs, Mr. Harper could point to the eclipse of the sovereigntist movement in Quebec on his watch, and to the full integration of the West into the federal government. Despite spats with Newfoundland here or Ontario there, the federation enjoyed a peace that we hadn't experienced in decades. The Pax Harperana. 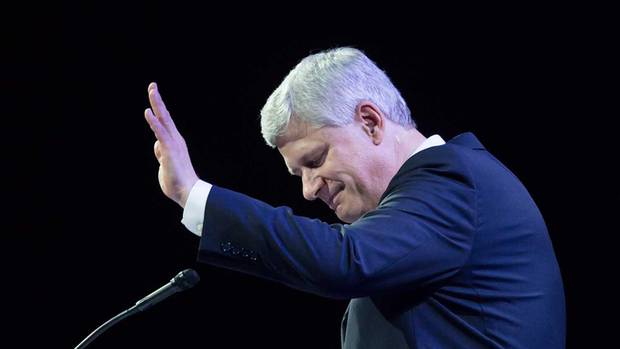 Adam Radwanski: Being cold and aloof may have worked in Harper’s favour

Mr. Trudeau's biggest priority, a $120-billion infrastructure program, is financed with deficits – proof, strangely, of the enduring Harper legacy, since the Liberal Prime Minister doesn't seem to feel he can raise taxes.

This is Harper federalism: a central government that sticks to its constitutional knitting while leaving the provinces to manage things as they see fit.

For many, it is a cramped, meagre federalism. For others it is a recipe for harmony in a large, thinly populated and diverse country. In any case, it is Stephen Harper's lasting legacy and it will not easily be erased.

FOR SUBSCRIBERS: MORE ON THE END OF THE HARPER ERA