We take freedom on the Internet – to connect and chat, to buy and sell – for granted. But the Internet is also a tool enabling liars and haters, crooks and despots. Is it time for international agreement on the norms for Internet governance?

Last year's economic contribution of the Internet was estimated at $4.2-trillion (U.S.). If the Internet were a national economy, it would be G5. By 2025, management consulting firm McKinsey & Co. estimates that the Internet of Things will generate upward of $11-trillion in efficiency gains and economic growth.

But the dark side, the cost of cybercrime – notably fraud and data theft – was estimated to be as high as $445-billion in 2016. And governments continue to censor and crack down on social media apps to curb dissent.

In its latest annual review, Freedom House, a U.S.-government-funded NGO based in Washington, named Estonia, Iceland and Canada as the top "free nations," but it reported that Internet freedom declined in 2016 for a sixth consecutive year.

China was identified as the "worst abuser" of Internet freedom because of its "information security" policy and its crackdown on free expression. Brazil dropped from "free to partly free," while Turkey dropped into "not free" because of its blocking of social-media platforms.

We need some ground rules on Internet use.

Last June, the Global Commission on Internet Governance concluded two years of deliberation. Its report, One Internet, should be the starting point for informed action.

The report maps the complex landscape of Internet governance, with its distributed institutions and procedures. The Internet has succeeded, it argues, because it is a network of interoperating networks and was constructed using carrots, not sticks. But national rules are increasingly having global effects – and the trends, Freedom House reports, are cause for corrective action.

One Internet argues for an open Internet system that allows data to flow freely based on efficiency, non-discrimination and freedom of expression. It makes a series of practical recommendations designed to ensure an Internet that is open, secure, trustworthy and inclusive, including:

Regular reports by Internet companies naming the governments that block access and listing what they are blocking.

Government agreements on targets that are off limits to cyberattack, with a mutual-assistance pact to deter cyberintruders.

Public education on cyberhygiene while ensuring broad public access to the Internet.

Standards on data protection, privacy and the use of algorithms.

Incentives to encourage competition to make the Internet and its devices accessible to all.

The commission argues that any oversight regime (or regimes) must be adaptable and resilient.

In terms of regulatory models, the International Telecommunication Union (ITU) is perhaps the closest in function, but for effective private-sector participation, designers should also look to the Montreal-based International Air Transport Association (IATA). It provides global governance and standards for airline safety, security, efficiency and sustainability.

Championing Internet governance is an initiative the Trudeau government could usefully incorporate into its multilateralist agenda. The Internet and digital literacy should be a key component in the government's new development plan. More than 60 per cent of the world remains offline, and the disconnected are disproportionately rural, illiterate and female. In our increasingly digital world, we need to develop a new social contract, one that works to narrow the divide between digital haves and have-nots.

The Internet has created a global commons for commerce and discussion that continues to expand. At its best it accelerates the exposure of corruption and enables research leading to scientific discoveries and medical cures that benefit humanity.

At its intolerant worst, the Internet is a vehicle for fake news, trolling, bullying, anti-Semitism, homophobia, racism and xenophobia.

For the gullible, the Internet encourages the spread of conspiracy theories and breeds suspicion of elites and the establishment. Facts have become fungible in an emerging post-truth, alternative universe of multiple media. This contributes to the Berlusconization of politics: the rise of clownish leaders who say ridiculous things and then laugh them off.

We need standards and norms of Internet behaviour. An international convention on Internet governance would be a useful step forward.

Aleppo is a call to action for Canada’s human-security agenda
Subscriber content
December 23, 2016 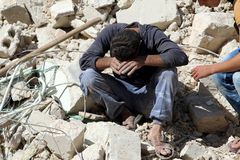