One campaign done. Another not quite so – but almost.

There remains virtually no obstacle to the presidential nomination of Donald Trump; Senator Ted Cruz's suspension of his campaign assured that. The obstacle to the nomination of Hillary Clinton is mostly symbolic; though Senator Bernie Sanders of Vermont vowed to take the fight to West Virginia this week, her surprising loss in the Indiana primary almost certainly will be regarded as an inconsequential diversion on the march to her coronation at the Democrats' midsummer convention in Philadelphia.

Suddenly there is virtually no dissension from Mr. Trump's contention that he is the presumptive Republican nominee. Though Governor John Kasich of Ohio has vowed to stay in the race, the Republican National Committee acknowledged that Mr. Trump, closing in on the 1,237 delegates he needs to clinch the nomination, would be the party's leader in November. He thus will become the most controversial and, according to his foes, the weakest presidential nominee of the age – but also the most underestimated and perhaps the least understood.

In any case, the nomination of a candidate with no filters, no political experience, few conventional allies and few developed policy positions creates another chapter in perhaps the most remarkable political story in modern American history.

Indeed, as startling as the election of an African-American as President of the United States was in 2008, the election that looms eight years later is every bit as astonishing – perhaps even more: a likely confrontation between the first female nominee of a major U.S. political party and a businessman known both for harnessing voters' anger and for producing anger among his rivals, who see him as defying all the customs and manners of American politics and posing a threat to the Republican Party's control of Congress.

Both likely nominees are major historic departures from American conventions. Though as long ago as 1961 President John F. Kennedy spoke openly of the possibility of a female president, the first 44 chief executives were men. And only once before in U.S. history has a business leader with no political experience won a presidential nomination; Mr. Trump's predecessor, Wendell Willkie, was defeated by President Franklin Delano Roosevelt in 1940, but unlike Mr. Trump, the utility executive was a thoroughly mainstream figure with conventional Republican views, a polished mien and the support of establishment figures.

At the same time, Tuesday's events showed there still was room for surprise in the presidential campaign.

On the surface, Tuesday's Republican primary results in Indiana provided little surprise. But even after months of pugilism within the party, the GOP candidates still found ways to astonish voters on Election Day: accusations that a candidate's father was linked to John F. Kennedy's assassin and a response that the GOP front-runner was a "pathological liar" and a "serial adulterer." So on that critical day of balloting, the question that emerged during the afternoon was less who would be the Republican nominee than whether the Republican contest itself was degenerating even further, becoming less of a political campaign than a spectacle.

By nightfall, Tuesday was a day when Mr. Trump triumphed even as Mr. Cruz, himself described by Mr. Trump as "Lying Ted," was describing his rival as "utterly immoral" and said that the likely party nominee "lies [with] practically every word that comes out of his mouth." In remarks following a humbling Indiana defeat, Mr. Cruz spoke of "dignity and respect" – incongruous characterizations for a contest that displayed little of either.

And yet hours later, Mr. Cruz was out of the race and Mr. Trump had changed the tone and timbre of his remarks, saying his principal rival was "one hell of a competitor – he is a tough, smart guy." Even so, Mr. Trump noted the negative advertisements aired against him – most of them, he said, were "false and disgusting" – but spoke of his "tremendous victory" and said, "We're going after Hillary Clinton." Mr. Cruz's withdrawal stunned political analysts – earlier in the evening his running mate, former Silicon Valley executive Carly Fiorina, spoke of carrying on the fight – but there were multiple signs that his effort was flagging. He had made several inroads in earlier weeks in state conventions where delegates were chosen, sometimes in defiance of the election results.

But Mr. Trump's triumph in party caucuses in Massachusetts over the weekend – the Manhattan billionaire picked up as many as nine additional delegates in a state he is almost certain to lose in November – underlined the difficulty that the stop-Trump movement faced.

Mr. Trump provided hints Tuesday night of the campaign he will run against the former first lady and senator from New York. "She will not be a great president. She will not be a good president. She will be a poor president," Mr. Trump said of Ms. Clinton. He added that her husband, former president Bill Clinton, signed the worst trade agreement "in the history of the world," a reference to the North American Free Trade Agreement among Canada, the United States and Mexico.

The fireworks in the Republican Party overshadowed the upset Mr. Sanders sculpted in the flatlands of Indiana, handing Ms. Clinton a stunning defeat – defying both the prognostications of the experts and the rhythm of the Democratic campaign.

Not that it made much difference. Mr. Sanders will put up a spirited fight in West Virginia but has suggested that his target now is less the nomination than the party platform – the quadrennial manifesto that sets out the party's principles and political goals. In the entire history of the United States, virtually no president nor member of Congress has paid more than a moment's mind to the party platform after the convention ends. This year will be no different. 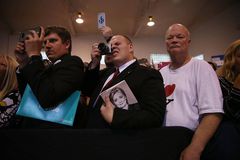