David Shribman
DRY FORK, W.VA.
Special to The Globe and Mail
Published May 9, 2016 Updated May 9, 2016
For Subscribers

The latest battleground in the altered presidential race is a battleground that has been dramatically altered over time – and that itself has altered American history substantially.

Amid the mountains and mines, the hollers and hillsides, the timberlands and trailheads, West Virginia has had an outsized influence on America for a state that is less than a tenth the size of Texas. It has shaped the Civil War and the Cold War, given a distinct accent to the country's food and folklore, added a surprising element to the country's basketball and ski heritage – all to the twang of the distinctive country music that echoes through its "Almost Heaven" country roads.

Now West Virginia, which hasn't played a central role in presidential politics for more than a half-century, is emerging as a dual laboratory: the first head-to-head confrontation between presumptive nominees Donald Trump and Hillary Clinton even as it is the Petri dish for one of the last struggles between Ms. Clinton and Senator Bernie Sanders of Vermont, who is continuing his campaign against all odds and most of the critiques of political professionals.

Most of all, however, the West Virginia battle shows how the American campaign has made an important transition, from the primary-and-caucus process just virtually completed on to the bigger contest, the November general election.

In doing so, the two presumptive nominees are fighting over issues that for a century and a half have been the markers of West Virginia politics: the extraction of resources – timber and coal primarily, though more recently natural gas as well – along with the transfer of wealth beyond the state's boundaries; the role of government and regulation in the commerce of the state; the great distinctions between rich and poor within its 62,000 square kilometres; and the place of guns in the state's life and culture.

The bitter conflict began months before the Indiana primary ended last Tuesday, and West Virginia became the new focus of the presidential campaign. The background is the Obama administration's emphasis on clean energy, which has endangered the state's coal-mining heritage, which began as early as 1792. Barack Obama's actions produced anger that rippled across the 117 coal seams in the state, so much a part of West Virginia's geology and character that coal appears in all but two of its 55 counties and is mined in just over half of them.

It didn't help matters when, in March, Mr. Obama's former secretary of state, Ms. Clinton, said: "We're going to put a lot of coal miners and coal companies out of business." She made it clear that she would help provide alternative employment, but she is still answering for those remarks –which do not differ substantially from the views of Mr. Sanders, who has been a warrior against climate change and Americans' dependence on fossil fuels.

Former president Bill Clinton, campaigning for his wife, was heckled last week during an appearance in the coal town of Logan, where the mayor said the Clintons were not welcome to visit. "People here are still fantasizing about the return of coal," said Richard A. Brisbin Jr., a retired West Virginia political scientist regarded as one of the leading experts on the state's political culture. "They're all upset about federal rules, and the politicians, who relied far too much on coal in the past, make a big deal about it every election. Now the Republicans are blaming all the problems in the state on Obama's 'war on coal.'"

So it surprised no one when, on the night of his Indiana triumph last week, Mr. Trump could barely contain himself when he vowed: "We're going to get those miners back to work."

West Virginia is no stranger to political conflict, and in fact it was born in political conflict, on a New Year's Eve that changed the country like none other. As 1862 changed to 1863, President Abraham Lincoln made two decisions that transformed the country. He decided to go forward with the proclamation that would begin the process of freeing American slaves and, amid the conflicts and contention of the Civil War, permitted West Virginia to break away from Virginia, a slave state and the site of the capital of the Confederacy, to join the Union.

Then, nearly a century later, West Virginia was the staging ground for the seminal Cold War-era struggle between two Democratic presidential candidates, Senators Hubert Humphrey of Minnesota and John Kennedy of Massachusetts. It was in West Virginia that Mr. Kennedy faced the most virulent anti-Catholic sentiment – and in overcoming it he proved to Democratic potentates that by nominating a Catholic they would not be consigning the party to defeat.

West Virginia also was where Joseph Kennedy, the former ambassador to Great Britain and the candidate's wealthy father, told his son, "Don't buy another vote. I won't pay for a landslide" – a jocular remark, perhaps, but one that underscores the state's tradition of corruption.

That tradition has persisted. A former governor, Arch A. Moore Jr., served three years in prison after pleading guilty to five felony charges in 1990. Mingo County, the site of the storied 1880s rivalry between the Hatfields and McCoys, was basically the province of one corrupt family that sent eight members to jail in the late 1980s in a corruption scandal that also led to the indictment and conviction of some six dozen people, including bus drivers and employees of a program for the aged.

The state's economic distress also has been persistent, with more than 330,000 people here still living in poverty in this decade, a rate of nearly 20 per cent. It was in part West Virgnia's poverty that led to the formation of the country's 99 "New Deal communities," the most famous of which occurred in the community of Arthurdale, a mere half-hour drive from the university centre of Morgantown.

When Eleanor Roosevelt first visited Arthurdale, taken there by the writer Lorena Hickok, widely believed to be her lover, the first lady said that the "filth was indescribable." She vowed to create a model community to provide jobs and a chance for prosperity in a rugged wrinkle of the state. Years later, the scion of another prominent American family, John D. Rockefeller IV, known as Jay, would become a poverty worker in the state, helping to build a community centre in the mining town of Emmons that would be known informally as Rockefeller Centre. Mr. Rockefeller, who retired last year, later served as governor and senator.

Mr. Rockefeller was a Democrat, as most state officials were in an era when West Virginia was regarded as perhaps the most Democratic state in the union. It voted reliably Democratic in the five elections of the Roosevelt-Truman era and even resisted Ronald Reagan in the 1980 election.

"The strong attachment began with the increase of union membership in the New Deal and after the [SecondWorld War]," said Kevin Barksdale, a historian at the state's Marshall University. "The United Mine Workers made West Virginia a Democratic stronghold. In the coalfields of West Virginia, socialism has not exactly been a dirty word."

But Mr. Reagan carried West Virginia in his 1984 landslide, and the state has sided with the GOP nominee in each of the last four elections. Mr. Obama won only 36 per cent of the vote four years ago – a stunningly poor performance – and today's state delegation in the House of Representatives includes no Democrats. As recently as the year 2000, the House delegation contained no Republicans.

The biggest modern transformation of the state came at the hands of a Democrat, Senator Robert Byrd, who served as Senate Majority Leader but, perhaps more important, as chairman of the powerful Senate Appropriations Committee. He used that perch to siphon billions to the state, providing roads, services – and jobs. Today West Virginians cultivate a hillbilly image – don't miss the Autumn Harvest Festival and the West Virginia Roadkill Cook-off beginning Sept. 23 – but are more interested in industry, health care, tourism (including both alpine and Nordic skiing) and high tech.

The longest-serving senator in American history (57 consecutive years), Mr. Byrd was the symbol of the power of one individual to transform a state. In fact, more than three dozen government installations, highways, training centres, and even a fingerprinting laboratory that was sited there merely because Mr. Byrd wanted it for his state, are sprinkled between West Virginia's borders.

But Mr. Byrd isn't the only symbolic figure rooted in this unlikely political battleground. The famous logo of the NBA is a stylized basketball player. But the figure isn't an imaginary athlete or a composite. It's the silhouette of Jerry West, born in the tiny West Virginia town of Cheylan (population 776) on the banks of the Kanawha River, and the MVP of the 1959 Final Four college basketball tournament. Look for it, and for one of West Virginia's most beloved sons, throughout the Air Canada Centre in Toronto.

Embrace or reject? Trump victory throws Republicans into turmoil
May 6, 2016 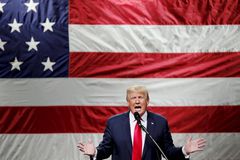