Ray Novak likes to tell about the time that Stephen Harper, who was then leader of the Canadian Alliance, decided to hold an event in the MP's Calgary constituency office. One of Mr. Novak's duties that day was to sweep the floors.

The Prime Minister's chief of staff has become the latest lightning rod of controversy in the trial of Mike Duffy. As revealed in court this week, a police interview of Ben Perrin, Mr. Harper's former legal counsel, suggests that Mr. Novak had been briefed about the personal cheque that former chief of staff Nigel Wright wrote to pay off Mr. Duffy's expenses.

Kory Teneycke said it would be "unfathomable" that Mr. Novak would know about Mr. Wright's payment and not tell the Prime Minister.

If Mr. Novak knew about that cheque but didn't tell Mr. Harper, there will be calls for his resignation. But that resignation is unlikely. Losing Mr. Novak would be very hard for Mr. Harper. There is no one closer to him outside his own family. But both men know Mr. Novak will resign if he must.

Mr. Novak first started working for the only real boss he's ever had in the late 1990s, when the former was a graduate student in politics at the University of Calgary and the latter was president of the National Citizens Coalition, a conservative interest group. He was one of two or three aides who travelled with Mr. Harper in a beat-up car when he campaigned for the Canadian Alliance leadership.

Quiet, competent and loyal beyond measure, Mr. Novak became Mr. Harper's executive assistant when he became leader. The young aide lived in an apartment above the garage in Stornoway and often ate with the family, becoming practically one of them.

Mr. Harper is very fond of cats. There is a story that, when the family cat was run over one day, Laureen Harper asked Mr. Novak to bury it, because the sight of it would upset her husband. (In another version of that story, the cook buried the cat.)

When Mr. Wright left his job in 2013 after the media learned he had paid Mr. Duffy's expenses, Mr. Harper asked Mr. Novak to be his chief of staff. He was 36.

But loyalty isn't the young adviser's only essential quality, say those close to the situation who spoke on background. He is less hyper-partisan than many of the Conservative Leader's advisers, and has a natural empathy for people that Mr. Harper, who approaches most relationships in transactional terms, conspicuously lacks.

A not-uncommon scene in the Prime Minister's Office over the past 10 years would involve several advisers urging Mr. Harper to adopt a strongly partisan response to an emerging situation. Mr. Harper himself might be raising his voice. Then Mr. Novak would calmly point out that the group faces several options, that the most partisan option would not go down well with the general public, and that perhaps the wisest approach might be option B. The Prime Minister would grudgingly agree.

Because Mr. Harper values that common-sense approach, and because the two go back, it was Mr. Novak who visited Mr. Harper at Harrington Lake, the prime minister's summer residence, in June, 2014, when the Tories' fortunes were at a low ebb in the wake of the Senate expenses scandal.

You must decide now whether you are willing and able to lead this party into the next election, Mr. Novak advised the PM. If you are not, you must step aside, so that the party can choose a replacement. Mr. Harper, obviously, decided to stay and fight it out. But no one else could have said that to Stephen Harper and escaped his wrath.

While there is some speculation in the media that Mr. Novak may have to resign. That is unlikely, if for no other reason than it would simply add fuel to the fire surrounding Mr. Wright's testimony. Mr. Harper would be asked how Canadians could trust his leadership when two successive chiefs of staff had to quit because they kept vital information from him.

But if Mr. Novak does have to go, he will be the first to tell Mr. Harper, and Mr. Harper will reluctantly consent.

It would be a sad end to a long and fruitful partnership. 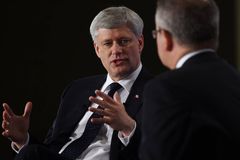 Opinion
The Duffy trial: A trip through the maze of improbabilities
August 19, 2015