Peter MacKay's decision to not run marks the end of the name-recognition portion of the Conservative leadership race. Now it's time for the candidates you couldn't pick out of a police lineup.

Mr. MacKay, former leader of the now defunct Progressive Conservative Party and veteran minister, was the Conservatives' preferred rebound guy. Well-known, handsome and acceptable, he seemed the most ready to get right back at it and take on Prime Minister Justin Trudeau. As a veteran Harper-government minister, he'd have similar policies, but a more likeable personality.

But Mr. MacKay knew enough about what usually happens to rebound guys to be wary. He'd probably win the leadership, but opposition leader can be a thankless task: Ask Michael Ignatieff and Tom Mulcair. Mr. Trudeau is riding high. And Mr. MacKay really did quit politics last year to spend time with his young family.

So now there's no big name in the race. Of course there's Kevin O'Leary, the Dragon's Den and Shark Tank reality-TV star, but though he claimed to be "licking his chops" at the prospect of a race without Mr. MacKay, he also suggested he'd rather be a king-maker.

It's hard to imagine he'd take the risk of running. Mr. MacKay has real political experience, but Mr. O'Leary has none, and he's not popular with Tory insiders. With a lucrative personal brand as a shrewd judge of the odds, would he want to take on the more-than-even chance that he'd lose to a Lisa Raitt or Kellie Leitch or Erin O'Toole? Who?

Both Mr. MacKay and Mr. O'Leary ranked as front-runners in the early leadership-race polls, largely because respondents knew their names. An online-panel survey conducted by Ipsos-Reid last week found those two were the only names known to a majority of respondents.

They were followed by a second tier. Tony Clement, who has been an Ontario or federal cabinet minister for 15 of the last 20 years and has run for the leadership of both the federal and Ontario Tories, was known to only 45 per cent. Then there's Maxime Bernier, well-known in Quebec but not elsewhere, and Candice Bergen, whose name is probably familiar to many of the 35 per cent who recognized it because they vaguely recall the actress who played Murphy Brown. After that group, recognition drops off.

This race is now for Conservatives who aren't household names. Perhaps a dozen of them.

But they're not nobodies. Some have résumés that would make Stephen Harper, circa 2003, look green.

The leading group now will likely include Mr. Bernier; still-undeclared former transport minister Lisa Raitt, who once ran the Toronto Port Authority; former House of Commons speaker Andrew Scheer, who on Tuesday stepped down as Tory House Leader to prepare a leadership bid; and, now that she has stirred the pot by advocating the screening of immigrants for anti-Canadian values, former labour minister Kellie Leitch, a pediatric surgeon. You might also count the potential candidacy by Erin O'Toole, a former helicopter pilot and lawyer who served briefly as veterans affairs minister.

After that there's Michael Chong, who is known in political circles for a democratic-reform bill and for quitting cabinet when Mr. Harper proposed recognizing Quebec as a nation. There's Mr. Clement, whose national-security policy launch this week won`t win him credibility. There are social conservatives Brad Trost and Pierre Lemieux. MP Deepak Obhrai has declared, and others like Ms. Bergen and Steven Blaney have mused they might.

It will get messy. Ms. Leitch's proposals have already made many Tories nervous. Mr. Bernier's relentlessly purist free-market ideology will win a piece of the party, but probably scare more. Mr. Scheer, a social conservative, might quietly win over that vein of the party – but then Mr. Trost might demand issues like abortion be raised in the open. Mr. Chong has made cuts in greenhouse-gas emissions an issue in a pro-oil party.

There's no way they'll resolve all that. But it's possible, though just possible, that the process will spit out someone who can bend or broker enough of it into a post-Harper Conservative Party identity. At least with Mr. MacKay out, it's harder to pretend the future revolves around name recognition. They can count on Mr. Trudeau beating them on that score. 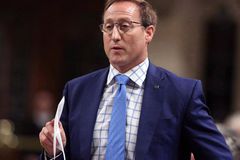