Canada's Auditor-General says the federal government must adjust the way it does business after a broad evaluation in which he says departments fail to consider whether their services actually benefit Canadians, cannot stay ahead of emerging trends and do not correct inadequacies even after they have been pointed out.

In marking the midpoint of his 10-year term, Michael Ferguson used his fall report to take an unusual step back from the assessments of specific programs to point to more systemic problems. Parliament, said Mr. Ferguson, uses his reports to learn about things that have gone wrong but does not ensure that changes are made to set them right.

"What about programs that are managed to accommodate the people running them rather than the people receiving the services?" asked Mr. Ferguson. "I am also talking about problems like regulatory bodies that cannot keep up with the industries they regulate, and public accountability reports that fail to provide a full and clear picture of what is going on…."

From the archives: Senate balks at expense oversight after report reveals wasteful spending

Opinion: Senators: Auditor has a lot of gall for flagging our abuses

Departments and agencies work in silos, he said, failing to learn from what others outside, or even inside, their own organizations are doing.

"Our audits come across the same problems in different organizations time and time again. Even more concerning is that, when we come back to audit the same area again, we often find that program results have not improved," said Mr. Ferguson. "In just five years, with some 100 performance audits and special examinations behind me since I began my mandate, the results of some audits seem to be – in the immortal words of Yogi Berra – 'déjà vu all over again.' "

For instance, said Mr. Ferguson, many past audits have revealed the government's lack of focus on Canadians who are the end users of its services.

And that trend continues in a new study of the Beyond the Border Action Plan which was introduced in December, 2011, to enhance security and the flow of goods and people across the Canada-U.S. border. Five years and $585-million later, the departments and agencies involved cannot show how the measures that were part of the plan have made Canadians safer or accelerated the movement of either trade or travellers.

"We found that, where performance indicators were developed," says the audit, "they measured whether activities and deliverables were completed, not the resulting benefits."

Another failure to assess the effectiveness of programming was highlighted in an audit of the process for resolving specific claims for First Nations, said Mr. Ferguson.

After decades of sluggish progress on settling these disputes, the government introduced a program called Justice at Last in 2007 which was aimed at making the system more fair and transparent. But it was implemented without input from the First Nations and, the audit found, it actually introduced barriers that prevented the resolution of some claims.

"In fact," said Mr. Ferguson, "since 2008, more claims have been withdrawn or become inactive than have been settled."

Indigenous issues, in general, have been a frustration, said the auditor.

While his predecessor, Sheila Fraser, summed up the progress made by the government in improving its programs for Canada's first peoples as "unacceptable," Mr. Ferguson said: "I can only describe the situation as it exists now as beyond unacceptable."

The auditors looked at the way Corrections Canada releases indigenous offenders and found that few of the First Nations, Métis and Inuit inmates are provided with programs to help them adjust back into the community. Nearly 70 per cent of indigenous prisoners are simply set free at their statutory release dates, says the audit, compared to the nearly 50 per cent of non-indigenous inmates who are granted parole and provided with a gradual reintegration that makes it less likely that they will offend.

Previous audits have also demonstrated the harmful effects that backlogs and delays can have on Canadians, said Mr. Ferguson.

The fall report continues that message by pointing out similar failings at Revenue Canada, where 170,000 objections from individuals and corporate tax filers are waiting to be processed. In 79,000 previous cases, says the audit, the agency took more than five years to resolve disputes with a combined worth of nearly $4-billion.

The Defence Department has also failed to learn from its mistakes.

While a 2012 audit found it had underestimated the life-cycle costs of the F-35 fighter jet, the new report looks at other types of equipment – planes, helicopters, submarines and armoured patrol vehicles – and found that, overall, National Defence did not adequately manage support in a cost-effective manner.

Nor have the armed forces successfully managed their recruiting plans, says the auditor. A new study by his staff found that the regular force has decreased in size since 2011-12 and the military is unlikely to be able to recruit, train and retain sufficient personnel to meet its target of 68,000 members by 2018-19 that is required to meet Canada's domestic and international needs.

Finally, said Mr. Ferguson, the fall report highlights the same gap between the government's capacity to provide technology-based services and Canadians' expectations that has been demonstrated year after year. Auditors found that Transport Canada does not develop motor-vehicle standards in a timely manner and that there are delays, sometimes of more than 10 years, between the identification of emerging risks and the completion of changes to vehicle regulations that would keep Canadians safe.

Civil servants are not wholly to blame for the fact that problems are not corrected or that reports of the Auditor-General go unheeded, said Mr. Ferguson. They have to balance the needs of society against those of the individual, often with limited resources, he said.

But politicians need to step up to provide oversight, said Mr. Ferguson.

"I wonder if I will find myself repeating these words" in another five years' time, he said, "or if I will be able to talk about real improvements in government services built around people." 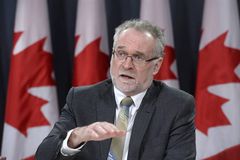