Starting on Monday, radio listeners in the London and Kitchener-Waterloo markets will hear an urgent plea to "fight back" against "the damage union power is doing to Ontario."

"In the last Ontario election, union bosses spent over $6-million to ensure their influence over another union-friendly government," the narrator will warn. The result is "higher taxes, higher deficits, higher unemployment" that make it "harder and harder for you to get ahead."

The voice belongs to Catherine Swift, best known as head of the Canadian Federation of Independent Business. But she delivers the message in her new role at the helm of a group trying to elbow its way into provincial discourse just in time for an election in which the future of organized labour will be front and centre, courtesy of Progressive Conservative Leader Tim Hudak's flirtation with "right-to-work" policy.

There are plenty of bones to pick with the charges levelled by Working Canadians, as Ms. Swift's group has branded itself. Taxes have not gone up in any significant way since the last election; the deficit has gone down, albeit more slowly than many would wish; organized labour's culpability for unemployment rates is highly debatable.

But then, those on Ontario's right would argue that turnabout is fair play. For years, they have complained that Working Families – the coalition of unions to which Working Canadians is an obvious response – has done the governing Liberals' bidding by spending buckets of cash demonizing the Tories. Ms. Swift's effort is a manifestation of those frustrations; it is also, in its scale, evidence of the uphill battle to provide a counterbalance.

The complaints about Working Families can be easy to dismiss. The ads it ran before the last election, implying that Mr. Hudak was a stooge of corporate masters, were hokey. And the PC Leader ran a clumsy enough campaign that he was perceived to defeat himself.

Even Liberals, though, acknowledge it was not so much during the 2011 election campaign itself that the Tories' lead eroded; it was in the summer before. That was when Working Families flooded the airwaves with attack ads. It was also when the Liberals ran a spot in which Mr. McGuinty made the case for his government.

The Liberals could afford a big buy for their positive ads, Tories argue, only because Working Families did their dirty work. Meanwhile, their party had to choose one or the other, and opted more for negative ads because they tend to yield better returns, but still could not match what the coalition was putting out.

The ostensible mystery in all this is why, rather than bemoaning their lot and vowing to change the laws if elected, the Tories have taken so long to try to respond in kind. In past elections, business interests gave right-of-centre politicians ample support. Why wouldn't they again?

Provincial Conservatives insist that such backing has been extremely hard to achieve. By their account, companies are afraid of retribution if the Liberals are re-elected. Some concede the Liberals have been good at "stakeholder management." Conversely, when they're feeling really bitter, they'll point out that, unlike unions, companies can't collect mandatory payments and direct them toward ad campaigns. That last complaint helps explain why Mr. Hudak wants to get rid of the Rand Formula, which requires all employees in unionized workplaces to pay dues.

Meanwhile, Working Canadians – which Ms. Swift describes as "very seat of our pants" and says has raised "a couple hundred grand" so far – will try to grow beyond its humble launch in two small markets. It's a modest hope, but it's more than most anyone else on her side of the spectrum has recently attempted. 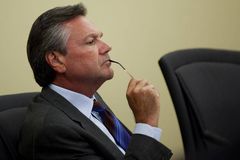 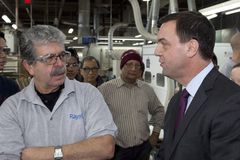 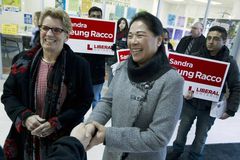