Prime Minister Stephen Harper and a sizeable entourage left Saturday for the Middle East on a six-day trip that will include a visit to Israel, the West Bank and Jordan.

Mr. Harper will address Israel's parliament, the Knesset, on Monday, making history as the first Canadian prime minister to do so. It will be the prime minister's first visit to Israel since winning power in 2006.

Spokesman Jason MacDonald says Mr. Harper will promote commercial relations, as well as peace and security in the region, when he meets Israeli leaders and, later in the week, the King of Jordan.

Mr. Harper is a passionate supporter of Israel and is expected to receive a glowing reception from Israeli leaders.

"We have been challenged many times in the region, by Iran, by Syria, by the attacks of terrorists, and each time he presents his position and we feel it's the right position; it's not a partisan position," Israel's ambassador to Canada, Rafael Barak, said in an interview from Jerusalem in the days leading up to the visit.

"To see citizens shelled by missiles, you have to decide who is right and who is not right ... he was not shy to say this in public, this is the most important element."

The prime minister has lots of company on his flight over — he's taking six cabinet ministers and at least 30 business people and community leaders who will take part in business meetings and cultural events during the trip.

Another passenger on the plane was Sen. Irving Gerstein, the Conservative party's chief fundraiser who became ensnared in the Senate expenses scandal last year after RCMP court documents suggested he may have tried to influence the outcome of an audit into Sen. Mike Duffy, something Gerstein has never commented on.

Mr. MacDonald says air travel and some accommodation costs will be paid out of government coffers, although full details of the final tally are not yet available.

Media organizations travelling with the prime minister are paying $8,000 a head, a price-tag that includes ground transport and access to communication facilities.

During his eight years in power, Mr. Harper has shifted his government's Middle East policy decidedly in favour of the Jewish state, marking what has been widely viewed as a departure from Canada's so-called honest broker position in the troubled region.

In the summer of the 2006, while Israeli warplanes were pounding Lebanon after Hezbollah militants kidnapped two Israeli soldiers, Mr. Harper characterized the response as "measured."

That comment angered Canadians of Arab and Muslim descent, and was widely viewed by analysts as marking a significant shift away from Canada's traditional role in the Middle East.

Mr. Harper has also forged a close relationship with Israeli Prime Minister Benjamin Netanyahu, who routinely refers to "Stephen" as a true friend of Israel.

Shimon Fogel, head of the Centre for Jewish and Israel Affairs, says the prime minister will likely provide counsel to the Israelis during his visit.

"Just based on the conversations I've had with Canadians over the past few weeks, I suspect the prime minister is going to provide observations and advice on some of the challenges that Israel faces," said Mr. Fogel.

"Harper can give perspective from a North American, European viewing of things. He can alert them to issues they should be sensitive to."

Mr. Harper's unwavering support of Israel was on full display on the eve of the trip on Friday, when his spokesman sparred with reporters over Canada's policy towards Israeli settlements in Palestinian territory.

Mr. MacDonald wouldn't say whether Mr. Harper endorsed the policy statement on the Foreign Affairs Department website that denounces the settlements as breach of the Fourth Geneva Convention.

The policy states: "As referred to in UN Security Council Resolutions 446 and 465, Israeli settlements in the occupied territories are a violation of the Fourth Geneva Convention. The settlements also constitute a serious obstacle to achieving a comprehensive, just and lasting peace."

When pressed on how Mr. Harper views the settlement issue, Mr. MacDonald replied: "Canadian policy is what the prime minister has articulated, which is that we want and support a two-state solution. It has to be arrived at through negotiations. And unilateral action is not going to help that." 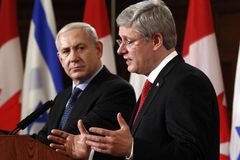