The Harper government's appointment of a high-profile Roman Catholic as Canada's envoy to the Holy See is coming under fire because of a report saying Dennis Savoie compared deaths in the Sept. 11, 2001 terrorist attacks to the rate of abortion in North America.

Mr. Savoie, once a senior executive at New Brunswick Power and a former top official with the Knights of Columbus, a Catholic service organization, was tapped Friday to represent Canada to the Holy See, the government of the Roman Catholic Church in Vatican City.

The NDP, however, is calling on Ottawa to withdraw his appointment, pointing to comments Mr. Savoie reportedly made in 2009 while addressing a Knights' dinner in the Sherbrooke, Que. area.

A December 2009 post on a "Quebec Life Coalition" website discusses a pro-life speech where he talks about the need to defend this position in a "Quebec culture that seems increasingly bent on killing the vulnerable" by abortion.

"Mr. Savoie started his speech by comparing the 3,000 deaths from 9/11 to the over 3,000 daily deaths that result from abortion," the website says.

"'Why,' he wondered out loud 'were we so stunned and bewildered by the 3,000 deaths on 9-11 when we're so silent about the 3,000-plus deaths that occur each day in North America from abortion?'," Mr. Savoie is reported to have said.

"Comparing reproductive rights to 9/11 terror attacks is not the kind of judgment we expect in a Canadian diplomat. Appointments like this will further undermine Canada's reputation on the international stage," Mr. Dewar said.

The Harper government defended the appointment and repeated Mr. Harper's pledge to not reopen a political debate over abortion. Abortion is legal in Canada.

"However, the government's position on these issues is clear. We have no intention of re-opening these debates," he said.

"Mr. Savoie is a highly accomplished individual with a wealth of experience who was appointed to advance the government of Canada's interests, values and position at the Holy See," the Baird spokesman said.

"We have every confidence he will carry out his duties capably and with objectivity."

The new envoy could not be reached for comment.

The Holy See has been called the world's oldest diplomatic service and operates what's been likened to a global listening post of missions from Vatican City. This grants it good access to what government officials call "soft intelligence" on world events and diplomats say the Holy See's lengthy experience in international relations means it often has smart analyses of what is happening, whether in the Middle East or elsewhere.

Andrea Mrozek, executive director of the Institute of Marriage and Family Canada, said she disagrees with making comparisons between abortion and historical tragedies.

But she said Mr. Savoie's concern, that today's culture is indifferent to the consequences of abortion, is not surprising coming from a Catholic.

"It's not terribly shocking to have a strong Catholic appointed to the Holy See," she said. "It boggles my mind people are still shocked by that."

Ms. Mrozek said the logical extension of what the NDP is suggesting is that people with pro-life views are unwelcome in public service.

Canada is home to 12.7-million Catholics, according to the 2011 National Household Survey. Official relations between the Holy See and Canada were established in 1969 when Pierre Trudeau was prime minister.

Former envoy Anne Leahy left the post in December 2012, before Pope Francis took the helm of the Catholic Church. Since then Canada's ambassador to Spain, Jon Allen, has been cross-posted to the Holy See as the non-resident chargé d'affaires there. 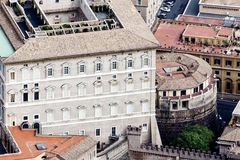 From Vancity to the Vatican: B.C. credit union head on meeting the Pope
July 16, 2014