The governing Conservative Party has taken a slim lead over the Liberals, according to a new poll that also found a "sizeable" improvement in public sentiment toward Prime Minister Stephen Harper.

The Abacus Data poll is the latest to find an increase in Conservative fortunes ahead of the looming federal election, scheduled for next October. Mr. Harper's government has rolled out new announcements this fall ahead of next year's anticipated balanced budget.

Nationally, the Conservatives now sit at 34 per cent support among committed voters, with the Liberals at 33 per cent, a narrow lead within the margin of error, according to the poll released Tuesday.

Half the country now thinks Canada is headed in the right direction, and more people have a favourable view of Mr. Harper, the Abacus poll shows, calling it a "sizeable shift" in sentiment. The share of respondents holding a negative view of Mr. Harper has also declined from 46 per cent to 38 per cent in the past nine months.

Abacus chairman Bruce Anderson believes the Conservatives have been seen to be less partisan, driving a rebound in the party's support and that of Mr. Harper. "That's what I see as being the big story here – the Conservatives have probably changed their approach, and that's manifesting itself in less downward pressure on their numbers and more openness to the Prime Minister personally," he said.

The findings echo a Conservative surge found in other recent polls. An Ipsos Reid poll, conducted for Global News and released Monday, found that the number of Canadians who believe the Conservative majority is "working well" for Canada has increased eight percentage points since last year, and now sits at 48 per cent. A Nanos Research and Institute for Research on Public Policy poll released last week also showed improvements for Mr. Harper in the past year.

However, the Nanos poll nonetheless found 48 per cent of respondents believe the country is headed in the wrong direction, while only 21 per cent said so in the Abacus poll. Mr. Anderson said the difference could be due to the order or wording of questions, or other factors.

In the Abacus poll, Liberal Leader Justin Trudeau's fortunes have slumped. Since September, the number of respondents with a positive view of him has dropped four percentage points to 35 per cent, one point ahead of Mr. Harper, while the number of people with a neutral view has increased.

Official Opposition and NDP Leader Thomas Mulcair's numbers have remained relatively steady, with more than half of respondents saying they have a neutral view of him, or don't know how they feel about him.

"I suspect that's a source of ongoing frustration," Mr. Anderson said. "…He's not offering voters outside the NDP tent, let me put it that way, something to make them say this is manifestly better and more likely to succeed than what the Liberals are speaking about."

Regionally, the Abacus poll shows the Conservatives with an eight percentage point lead in vote-rich Ontario, though Mr. Anderson said it is still best to consider Ontario a "very competitive situation." The Conservatives also had wide leads in the Prairies and a narrow lead in British Columbia, while the Liberals held large leads in Atlantic Canada and Quebec. 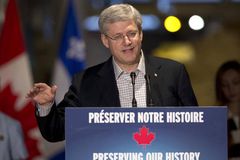 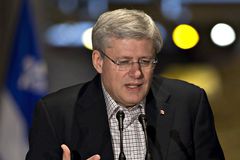 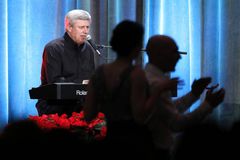