The federal government's deficit position could take a big, one-time hit to fund Stephen Harper's new election goodie for Quebec: a tax compensation pledge that could be worth $2.2-billion.

But Mr. Harper said Tuesday that this charge on the books wouldn't affect the pace of balancing the budget.

"In terms of what this does to our deficit track, this will be - when we conclude an agreement, we expect - a significant cost," the Conservative Leader told reporters at a campaign stop in Central Quebec.

The Quebec pledge runs contrary to the Tory message so far this campaign that it can't afford more spending and that new, big-ticket election promises - like income-splitting for parents - must be delayed until Ottawa's back in the black.

Last week, the Conservatives promised to sign a deal with Quebec by September, if re-elected, that would give the province compensation for moving to an HST-style sales tax that ensures that the levy applies to the same goods and services as the federal GST. Tories said if all goes well Quebec could get in the ballpark of the $2.2-billion it's been seeking.

Their April 1 announcement helped soften the blow after the Conservatives pledged March 31 that they will provide a multibillion-dollar loan guarantee for a Newfoundland and Labrador hydro project if they are returned to government. Quebec considers this a federal subsidy for a competing power producer who would be selling into the U.S. market alongside it.

Mr. Harper played down the impact of adding as much as $2.2-billion to the deficit. "It is a one-time cost for this year. It will not change the overall downward path of the deficit over the next few years," he said.

This fiscal year's deficit is currently projected to be $29.6-billion, before another $2-billion or so is factored in.

The Tory Leader did not explain exactly how this would affect this year's deficit but said the costing of the promise would be included in his party's platform. He noted the Liberals also back the measure but have not provisioned for its cost in their basket of promises.

The Conservative Leader signaled he expects Quebec will have to adjust its sales tax so that it more closely conforms to what other provinces have done when they moved to a harmonized sales tax.

"We've made considerable progress in our negotiations. I met with Premier [Jean]Charest quite recently so we're very optimistic we'll get that."

He defended the fact the Tories held back the deal from their March 22 budget, even though including it in there might have helped secure Bloc support for the fiscal plan and kept Canada out of an election campaign.

Opposition parties toppled the Conservative government March 25 in part because they could not find enough in the 2011 budget to support.

Mr. Harper said the outlines of a deal for the HST compensation were not ready before the election campaign began. "The reason it's not in the budget is we did not have an agreement in the budget and we were not planning to be in an election."

Quebec has for some time pushed for the compensation, noting Ottawa in recent years gave Ontario and British Columbia billions of dollars in cash to help cope with the transition to a harmonized sales tax that merges the GST and provincial sales tax into one levy covering the same set of goods and services.

The HST's economic appeal is that it yields a tax break for business and improves the investing climate for provinces that adopt it. What's politically perilous, though, is that it shifts some sales-tax burden to consumers from business, and, in the short term at least, hikes costs for consumers.

That's why provinces want compensation, which they can use to ease the initial impact on consumers.

The Harper government spent $5.9-billion bankrolling the shift to the HST in B.C. and Ontario. Economists say this compensation was crucial in persuading the provinces to adopt the merged tax.

Ottawa has pushed provinces where the HST doesn't already exist to adopt it, saying it's good for the economy.

The cash from Ottawa helps Ontario underwrite the cost of cheques it's sending Ontarians to help cope with the tax shift. 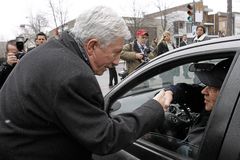 Impossible to please, Ontario ends up with nothing
April 4, 2011 What has Stephen Harper done for Canada's economy?
April 5, 2011 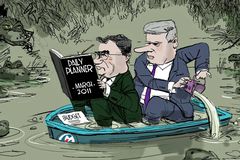 Harper's promises are for far in the future
April 4, 2011 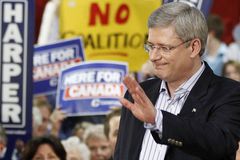