The second minority government of Stephen Harper has fallen.

Early Friday afternoon, 156 opposition MPs – all of the Liberals, New Democrats and Bloquistes present in the House of Commons – rose to support a motion of no-confidence.

It was also a motion that declared the government to be in contempt of Parliament for its refusal to share information that opposition members said they needed to properly assess legislation put before them.

When the cameras were trained elsewhere, several members crossed the green carpet that divides one side of the House from the other to embrace those in the parties opposite – political rivals who will spend the next six weeks of an election campaign castigating and belittling each other.

Mr. Harper took time to shake hands with Michael Ignatieff, the man who was orchestrating his ouster.

But once the vote had been counted, and the results read into the record, the gloves were off.

Mr. Harper, who moved the final motion to adjourn Parliament, said he would be visiting Governor-General David Johnston on Saturday morning to "take the only course of action that remains."

The Conservative Leader said Canada's economic turnaround would remain his priority and that of his candidates. There was nothing in the budget tabled earlier this week, he said, that the opposition parties should have objected to.

"Unfortunately, Mr. Ignatieff and his coalition partners in the NDP and Bloc Quebecois made abundantly clear that they had already decided they wanted an election instead, Canada's fourth election in seven years, an election Canadians had told them clearly that they did not want," he said. "Thus the vote today, which obviously disappoints me, and will, I suspect, disappoint most Canadians."

The Liberal Leader said Mr. Harper confirmed his disrespect for democracy by speaking after the vote but making no mention of the fact that his government had just been found in contempt of Parliament and taking no questions from reporters. "This tells you all you need to know about this man," he said.

Mr. Ignatieff, who did entertain questions, was peppered with queries about his willingness to form a coalition government with the NDP should Mr. Harper be returned with a minority.

As he has done previously, Mr. Ignatieff did not answer directly, saying only that he is running to create a "Liberal government that respects democracy instead of having contempt for democracy."

Bloc Leader Gilles Duceppe said the Conservative government has not represented the values and interests of Quebeckers. When asked if he would be willing to form a coalition, he reminded reporters that Mr. Harper asked him and NDP Leader Jack Layton to meet in 2004 to talk about forming a coalition to replace then Liberal prime minister Paul Martin.

For his part, Mr. Layton said Mr. Harper lost power because has clearly demonstrated that he is not willing to work with the other parties in the house of Commons. "He made a choice," the NDP chief said, "and that choice was to take us into an election."

In the final moments of the Conservative government, there were many kind words of praise offered to Peter Milliken who, after a decade in the Speaker's chair, was presiding over his last session before retirement.

But the debate that was heard across the country during the morning was as rancorous and vitriolic as Canadians have heard from the 40th Parliament, a session of government marked by the animosity expressed on all sides.

Shortly after 10 a.m., Mr. Ignatieff rose to "inform the House that the official opposition has lost confidence in the government."

For the first time in Canadian history, he said, a committee of Parliament has found a government to be in contempt.

"We are the people's representatives," Mr. Ignatieff said. "When the government spends money, the people have a right to know what it is to be spent on. Parliament does not issue blank cheques."

This week, the opposition-dominated procedure and House affairs committee found the government to be in contempt for failing to release information related to the costs of crime legislation and the purchase of stealth fighter jets.

In response, Government Whip Gordon O'Connor was blunt in his assessment of the opposition. "When, during the election, a matter of ethics comes up, I would expect Liberal candidates to put bags on their heads."

Of the Bloc, he said, it "basically has no function. They have no purpose. They are nothing."

And with the NDP, Mr. O'Connor said, "there is drama, screaming, yelling, outrage. It voted against seniors. ... All I ever hear from its members is talk, talk, talk."

Explainer: How does the Governor-General trigger an election?
March 24, 2011 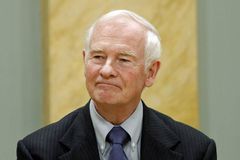 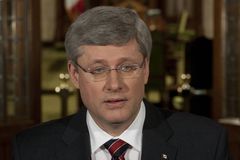 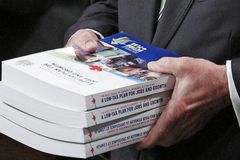 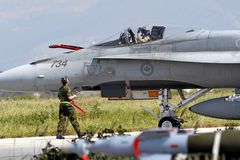 Many bills would die with election call
March 24, 2011 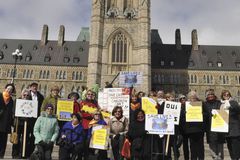