The Harper government is wringing every last drop of political gain out of the largely exhausted stimulus package, staging an unprecedented number of events across the country while spending millions on ads in the run-up to a possible election.

More than 80 Conservative MPs and senators held events Thursday to showcase all the nice things governments built during the recession via billions in deficit-financed spending.

Pollster Dimitri Pantazopoulos said the events - which were largely in Conservative ridings - are about getting Conservvative MPs attention in the local media, reminding local voters what they've delivered for the riding.

"This will give them increased profile during an election," said the Praxicus Public Strategies pollster, who has worked for the Harper government.

More than 5,000 green and blue signs were erected across the country; no project was too small for a billboard. The colour scheme is similar to that of the Canadian Alliance party that Mr. Harper led before merging it into the new Conservative Party in 2003.

On-line, an Economic Action Plan website controlled by Mr. Harper's office promoted the Prime Minister with numerous photos, even as bureaucrats warned the look of the website breached standard protocol. One of the few reversals occurred in 2009 when the government pulled a link on the site that brought visitors to a video of Mr. Harper playing a Beatles tune on the piano at the National Arts Centre.

A memo to Mr. Harper, marked secret and released via access to information after an 18-month delay, surfaced Thursday revealing the extent to which the Prime Minister's Office (PMO) called the shots on the $2-million website. Then Clerk of the Privy Council Office (PCO) Kevin Lynch writes in the memo that the site was originally run by Finance Canada after the 2009 budget.

"Since then, content development has remained a joint PMO/PCO responsibility; final content approval rests with PMO," states the document, which became public in response to a request by The Canadian Press.

Apart from a few exceptions, virtually all of the $60-billion stimulus package money has been spent. Even so, the government is currently spending $6.5-million to promote the action plan through to March 27, which is about when a federal election campaign will start if the government is defeated next month over the budget.

To put that advertising figure in context, the total campaign spending limit for the Conservative Party in the 2008 election was just under $20-million. The taxpayer-funded ads coincide with an extensive advertising campaign by the party.

The opposition Liberals argue federal rules need to change. They point to Ontario, where taxpayer-funded government ads can't air unless they've been approved as non-partisan by an independent third party.

The Ontario government passed a law in 2004 banning the use of a politician's name, image or voice in any government ad.

Donald Savoie, an expert on federal governance and a Université de Moncton professor, says changing the rules is the only way to ease the tension between public servants and politicians over government advertising. It is a debate that goes at least as far back as the Trudeau government of the 1970s, he said.

"I don't think this crowd is any worse than the previous crowd and I'm not sure the next crowd will be any better," he said. "I think it begs the question: How do we redefine the relationship between public servants and ministers? And I think we're in urgent need of that debate, but it's not going to happen now."

What connection does Jason Kenney have with a rural library in Eastern Ontario? None, really.

But there was Canada's Immigration Minister Thursday in the village of Vernon, near the

southern limit of the City of Ottawa, highlighting the federal government's $50,000 contribution to a new wheelchair ramp for the tiny local library.

The Calgary-based minister was there with the riding's Tory MP, Pierre Poilievre. The event was part of a flurry of similar ones across the country staged by Conservatives to highlight federal stimulus projects. The vast majority were re-announcements. While the library ramp project was already public, Thursday was the first local, federal announcement. Mr. Poilievre's office said the funding came late because it was from leftover stimulus cash.

Mr. Kenney's office said the minister was in Ottawa for meetings but still wanted to take part in the media blitz. 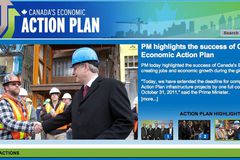 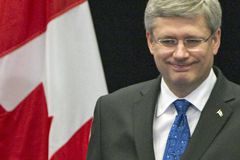 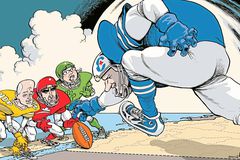