Prime Minister Stephen Harper has retreated further from his pledge to regulate carbon emissions in the oil industry, saying it would be "crazy" to do so at a time of fallen crude prices.

In the House of Commons on Tuesday, the Prime Minister rebuffed calls for new measures to deal with the country's fastest growing source of greenhouse gases just a day after an Environment Canada report suggested the country is falling well short of Mr. Harper's international commitment to reduce emissions.

Mr. Harper promised for years to set emission limits for the industry under his government's "sector-by-sector approach," but in the past year, he has changed his tune, saying Canada cannot move on the issue until similar measures are adopted in the United States, where oil production has soared. President Barack Obama is battling both U.S. states and Republicans in Congress over his proposal to rein in emissions from coal-fired power plants, and he has no immediate plans to regulate greenhouse gases in the oil industry.

New Democratic Party environment critic Megan Leslie accused the Prime Minister of breaking his promise to regulate the oil industry, and generally failing to provide leadership on the fight against global warming in the same week that nations are meeting in Peru to set the stage for an international climate agreement.

"As countries from around the world act, as the largest emitters act, including China and the U.S., this Prime Minister and that government are letting Canadians down," she said.

In a report on Monday, Environment Canada said that, without new action, Canada will miss by a wide margin the pledge to reduce greenhouse gases by 17 per cent from 2005 levels by 2020 that Mr. Harper made at a UN climate summit five years ago. Between 2005 and 2020, emissions from the booming oil sands are expected to grow by 45 megatonnes, almost completely offsetting progress in the electricity sector, where Ontario shut down its coal-fired power plants.

Global oil prices have fallen nearly 40 per cent from their peak in June, and energy companies in Alberta are expected to cut their capital spending for 2015, which could result in slower oil sands expansion and lower-than-anticipated greenhouse gas emissions.

Economists say proposals to set a limit on carbon emissions for the oil sands would cost producers less than $1 a barrel. On Twitter, University of Alberta economist Andrew Leach said Mr. Harper appears to be suggesting the oils sands "are within $1/[barrel] away from disaster."

Alberta Premier Jim Prentice is set to release an update on his government's climate regulations, which impose a levy on oil sands companies of $15 a tonne of carbon dioxide emissions when they exceed a set limit. Mr. Prentice has also called for a continental approach for the gas and oil industry, but is under pressure to raise the $15-a-tonne penalty.

At the United Nations climate summit in Peru, Environment Minister Leona Aglukkaq said Ottawa has regulated in areas of coal-fired electricity and transportation and remains committed to achieving emissions reductions. But in a statement to the summit, the Minister offered no new targets – in contrast to the United States and China – and made no promises of specific action other than to regulate a greenhouse gas, hydro fluorocarbon, that represents a tiny portion of Canada's overall emissions.

"Canada stands ready to help its international partners, and we will continue to move forward with measures in a way that reduces greenhouse gas emissions while maintaining economic growth," she said. "Our record speaks for itself. We have shown that it is possible to protect the environment while supporting economic growth." 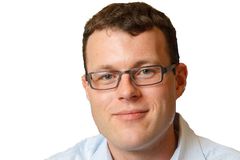 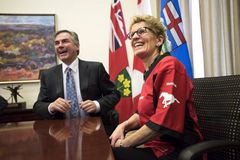 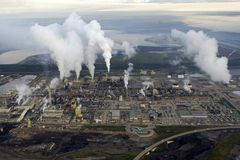 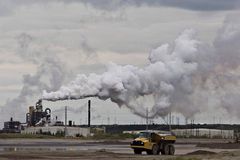 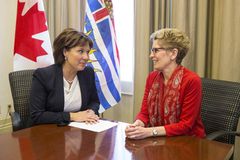