The marathon race is on, and the three major party leaders are all running on the economy.

The Conservatives, NDP and Liberals agree that the central issue of the campaign – at 78 days, the longest since 1872 – is whether Stephen Harper is the best choice to guide the faltering Canadian economic engine.

Speaking to reporters Sunday after he asked Governor-General David Johnston to dissolve the 41st Parliament and call a general election for Oct. 19, Mr. Harper promised to keep a steady hand on the economy and a steely eye on national security if given a virtually unprecedented fourth consecutive mandate.

The drawing up of the election writ coincides with a new poll by Nanos Research that suggests the parties are in a tight three-way race, something never seen before at the beginning of a federal election campaign. The Conservatives hold a statistically insignificant lead over the NDP, at 31.5 per cent to 30.1 per cent, with the Liberals close behind, at 29.3 per cent. Since the poll's margin of error is 3.1 percentage points, the three parties are in essence tied going into the campaign.

This election, Mr. Harper declared Sunday, is about "who will protect our economy in a period of ongoing global instability … and it is an election about who is equipped to make the tough calls to keep our country safe."

Speaking a few minutes later, NDP Leader Thomas Mulcair concurred that the economy was the No. 1 issue facing voters.

But he countered that Canada is flirting with recession, that unemployment is stubbornly high and that household debt has grown to dangerous levels.

"Clearly, Mr. Harper, your plan isn't working," he said, promising if elected to "kick-start the economy and get Canadians back to work."

Liberal Leader Justin Trudeau, speaking in Vancouver, touted his plan to increase taxes on the wealthiest Canadians so as to lower them for middle-income earners.

Mr. Harper fired back Sunday night by depicting his rivals as risky gambles who can't be trusted to make the right decisions for the country.

The Conservative Leader spoke in front of hundreds of supporters in Montreal about Mr. Mulcair's "socialist and protectionist" policies, while attacking Mr. Trudeau's inexperience.

"Some people will say: Let's take a chance with Justin or Mulcair. But our future is not a lottery," Mr. Harper said. "Greece took a chance with a left-wing government … which took a terrible situation and made it worse."

He repeatedly called for the re-election of a "majority Conservative government," stating it would afford Quebeckers with a stronger voice at the cabinet table.

Outside the rally at the Ben Weider Jewish Community Centre, there were dozens of protesters, representing a wide variety of the Conservative Party's opponents in this election. There were union workers, anarchists, environmentalists and supporters of Palestine, some of whom shouted insults as Conservative backers arrived.

Earlier in the day, Mr. Harper was asked by reporters why he had sought the longest election campaign since John A. Macdonald defeated Edward Blake in 1872. He justified the decision on the grounds that the election campaign was already effectively under way, and all parties should be bound by the same rules.

"If we're going to run our campaigns … those campaigns need to be conducted under the rules of the law, that the money come from the parties themselves, not from government resources," he said. In fact, however, an extended campaign also increases the cost to the public.

In Sidney, B.C., Green party Leader Elizabeth May chastised Harper for an unfair system that will cost taxpayers "tens of millions of dollars" and give the Tories an unfair advantage.

Canadians "deserve MPs who put Parliament ahead of party" and can set aside "hyper-partisanship for citizenship," May said.

In his own launch at Bloc Quebecois headquarters in Montreal, leader Gilles Duceppe reiterated his familiar promise to fight for Quebec's interests in Ottawa, where he said the province has been ignored on critical issues including pipeline debates

For the Conservative Leader, national security is the other issue at the top of the election agenda. The government, Mr. Harper pointed out, is part of the coalition effort to contain Islamic State in the Middle East, has confronted Russian adventurism is Ukraine and passed tough new anti-terrorism legislation.

"Now is not the time for political correctness, inexperienced governance or an ideological unwillingness to act," he warned. "Now is the time to face those who threaten us with moral clarity, strength and resolve."

For his part, Mr. Mulcair avoided any mention of national security, focusing instead on the NDP's plan for subsidized daycare, while castigating the Conservatives for their record on the environment, aboriginal relations, job creation (or a lack of it), and for the plethora of scandals that have plagued the party, especially during the third government.

On the very first day of the campaign, the truth was already being bent. Mr. Harper got around Canada's rather dismal economic performance over the past year by changing the frame of reference. "Not every month or every week but over a period of six years now we have consistently outperformed other major industrial economies," he declared.

Mr. Mulcair condemned Mr. Harper's fiscal track record: "He's had eight deficits in a row and has added over $150-billion in debt." The three leaders also contrasted strongly in style on Day One. Mr. Harper, as in past campaigns, delivered a statement in front of Rideau Hall and took a limited number of questions from reporters. Mr. Mulcair, speaking soon after, delivered a statement in Gatineau, across the river from Ottawa with the Parliament Buildings in the background, and then left without taking questions – an eyebrow-raising decision for an opposition leader on the first day of an election campaign.

Mr. Trudeau refused to cancel his commitment to attend Vancouver's Gay Pride parade, and was in the air when Mr. Harper and Mr. Mulcair were on the air. He did, however, hold a press conference in Vancouver around 11 a.m. Pacific Time, with the Coast Mountains as a backdrop, surrounded by supporters and candidates. And he answered questions until reporters had run out of questions to ask. 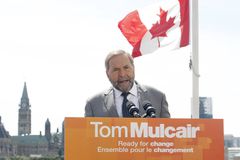 Trudeau says he has better economic plan than NDP
August 2, 2015 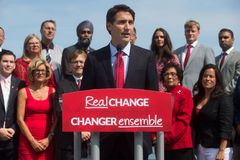 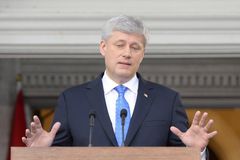 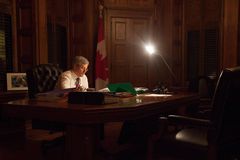 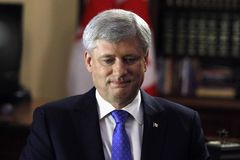 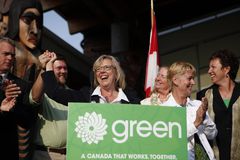 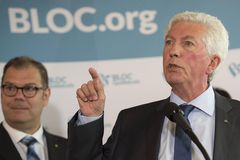 Follow John Ibbitson, Daniel Leblanc and Ian Bailey on Twitter @JohnIbbitson @danlebla @ianabailey
Report an error Editorial code of conduct
Due to technical reasons, we have temporarily removed commenting from our articles. We hope to have this fixed soon. Thank you for your patience. If you are looking to give feedback on our new site, please send it along to feedback@globeandmail.com. If you want to write a letter to the editor, please forward to letters@globeandmail.com.
Comments