The three main party leaders attacked each other over one of the most important issues facing Canadians, offering sharply contrasting solutions to the country's economic woes.

The leaders, locked in a statistical dead heat in the polls, adopted a more combative tone at The Globe and Mail debate Thursday night in Calgary – the second of the 2015 campaign. On a night that saw a series of fractious back-and-forths over which among them has the best plan to recharge a sluggish economy, there were no obvious knockout blows, but each leader defended their positions on the oil sector, corporate taxes and the Canada Pension Plan, among others.

Stephen Harper, who seemed comfortable to stand back and leave his rivals to hammer at one another, defended his record in a year that has seen the economy shrink in the first half.

Mr. Harper, Liberal Leader Justin Trudeau and NDP Leader Thomas Mulcair, each of whom have about 30 per cent of the electorate's support after 47 days on the campaign trail, used the debate to try to connect with voters and surge ahead of the pack.

At issue was how to create jobs and spur growth at a time when the country's centrepiece petroleum sector is plagued by low oil prices.

Taxation emerged as a major point of contention between the three leaders. Mr. Harper noted that he is the only one who is promising not to raise taxes and warned that the Liberal and NDP plans would harm the economy. He was particularly focused on attacking his rivals' plans to expand the Canada Pension Plan, which he argued is an unnecessary payroll tax.

Corporate taxes also emerged as a key dividing line. Mr. Mulcair defended his plan to raise the corporate tax rate from15 to 17 per cent, arguing the new rate would be lower than the 21 per cent it was when the Liberals were last in power and would also be lower than the average rate under the Harper government. The NDP Leader defended his plan as a balanced approach that stood in contrast to Mr. Trudeau's "reckless" plans to run deficits.

The Liberal Leader sought to differentiate himself from the other two by arguing that only his party is willing to make the major investments in infrastructure that are required to grow the economy.

Mr. Harper also defended his determination to remain at the Pacific Rim trade talks – which appear poised to result in a deal within weeks but threaten to sideswipe jobs in Canada's auto parts sector. He acknowledged the auto industry may not like a Trans-Pacific Partnership accord but said the benefits of freer trade with 11 other countries from Japan to Australia outweigh the risks.

"What I say to the auto sector in particular, I'm not suggesting they will necessarily like everything that is in that, but what I am saying is we simply cannot afford as a country to have our auto sector shut out of global supply chains. That would be a disaster," the Conservative Leader said.

Mr. Mulcair told reporters after the debate that Mr. Harper should be very prudent in the negotiations.

"We're very concerned with his attitude," he said, warning that Canadian auto jobs could be jeopardized.

Mr. Harper was no longer the main target of attack like he was the last time party leaders faced off Aug. 6 in the first campaign debate. This time, Mr. Mulcair and Mr. Trudeau devoted far more effort trying to erode each other's credibility.

One of the testiest exchanges during the debate occurred between Mr. Trudeau and Mr. Mulcair. The Liberal Leader dismissed the NDP's promise of a $15-an-hour federal minimum wage, arguing it will affect very few people. Mr. Trudeau also said that because the NDP's spending plan doesn't fully ramp up until the fourth year, promises like $15-a-day child care won't happen anytime soon.

"You know a lot about that, don't you Justin," Mr. Mulcair fired back, in what was likely a veiled reference to Mr. Trudeau's admission that he once smoked marijuana after he was elected as a Member of Parliament.

"Mr. Mulcair, you can make jokes all you like. This is Canadians having trouble making ends meet and you're offering a national minimum wage that … is giving false hope," said Mr. Trudeau.

Mr. Mulcair then noted that Mr. Trudeau voted for an NDP motion in support of a $15-an-hour minimum wage.

"You voted for it, now you're campaigning against it," said Mr. Mulcair. "You didn't know what you were doing, when you voted for it?"

The role immigration plays in Canada dominated the middle of the debate – as to whether the country is generous enough in welcoming people to this country. Mr. Trudeau and Mr. Mulcair criticized the Conservatives for their slow pace in bringing in Syrian refugees.

Mr. Harper has previously argued that security screening is affecting the pace of processing asylum seekers – Ottawa has promised to bring in 11,300 and has currently taken in about 2,500 – but the NDP and Liberal leaders rejected his argument that Canada needs to ensure that terrorists don't sneak in this way.

Mr. Trudeau dismissed this. "We don't take that as an excuse to close our doors … We need to once again be the open generous country. Not using [security] as an excuse to do less," he said. "We have a Prime Minister who prefers to pander to fears."

The Conservative Leader shot back that bringing in boatloads of Syrians without careful scrutiny would have been a "huge mistake." 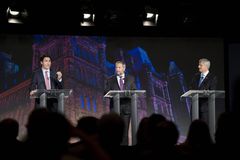 In blizzard of talking points, Harper manages to hold his own
September 17, 2015 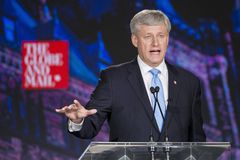 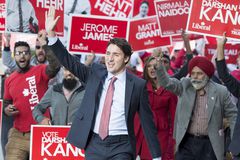 Harper a bystander as Trudeau, Mulcair face off
September 17, 2015 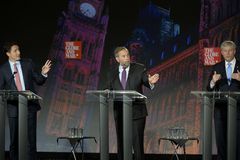 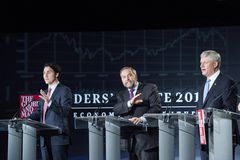 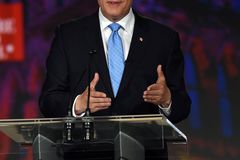 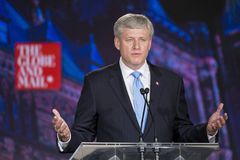