Western Canadian farmers who were convicted in the 1990s of taking their grain across the border to sell in the United States have been pardoned.

Prime Minister Stephen Harper announced the pardons on Wednesday on a farm near Kindersley, Sask., where he and Agriculture Minister Gerry Ritz marked what the government calls marketing freedom day.

New federal legislation took effect on Wednesday to end the Canadian Wheat Board's decades-long monopoly on western wheat and barley sales. That means western farmers can sell their grain to whomever they choose, whenever they choose, instead of having to go through the board.

"These people were not criminals. They were our fellow citizens," the Prime Minister said to cheers from hundreds of invited farmers gathered to support the change to the wheat board.

Jim Chatenay, one of the pardoned farmers, said he was "overwhelmed with happiness."

"Now we can have everything in our favour … It's just a glorious, wonderful day and this was well worth the wait."

The farmers were trying to get around a law at the time that said they had to sell their wheat and barley through the Canadian Wheat Board or get export permits from the agency.

Mr. Chatenay ran into trouble in 1996. The Alberta rancher was told to pay a $4,000 fine or face 64 days in jail for driving across the border to donate a bag of wheat to a 4H club in Montana. The case was in and out of court until 2002, when Mr. Chatenay was put behind bars.

"The time was long and slow. Played a lot of cards. Lockdowns were a little painful and scary 'cause every once in a while we'd have to get moved around a little bit," he recalled.

In the end, Mr. Chatenay served 23 days. He joked that he got credit for good behaviour.

Mr. Harper said the farmers who drove small amounts of grain across the border in symbolic rebellion were the first to raise the monopoly issue in the minds of Canadians.

"For these courageous farmers, their convictions will no longer tarnish their good names … it is to them that much of this victory is owed."

The grain growers belonged to a loosely knit group called Farmers for Justice. Their vehicles or equipment were often seized at the border, and some were charged and convicted for breaking the law. At least one producer spent several months in jail.

Some farmers still support the monopoly. They worry that the open market will leave them at the mercy of railways and big international grain companies.

The group Friends of the Canadian Wheat Board said in a news release on Wednesday that the change will hit farmers in the pocketbook.

"By destroying the world's largest marketer of wheat and barley, Stephen Harper has transferred a tremendous amount of wealth and influence away from farmers," group chairman Stewart Wells said. "There is no longer any meaningful influence by farmers inside the grain trade."

The group said the "crippled" wheat board will soon have no credibility with either farmers or international customers.

Mr. Chatenay, however, lauded the change.

"Now we have the choice that the wheat board can step aside at times, because they can't be good to everybody all the time. And what really bothered me is that they told me when and how to sell my grain when I had a buyer in the U.S. that would pay me cash up front, done, finished," he said.

The true impact of an open market is unlikely to be felt much this year, as poor crops in other parts of the world, and a drought in the United States, are raising demand for Canadian-grown grain.

In Winnipeg, the revamped wheat board started the first day of the new crop year with the announcement of another grain-handling deal with one of the country's largest agribusinesses. Richardson International of Winnipeg will accept grain deliveries from farmers with wheat board contracts at all its locations in Western Canada.

With the loss of its monopoly, the board, which does not own any terminals, must sign contracts with companies that can handle farmers' grain.

Wheat board president Ian White said the agency now has more than 170 locations across the West where producers can deliver their crops.

New Democrat MP Pat Martin has said the Conservatives are gloating about killing what he calls the most successful grain marketing company in the world.

Liberal Ralph Goodale, minister responsible for the wheat board when his party was in power, suggests an independent organization should monitor what happens in the marketplace to see if farmers are better or worse off. 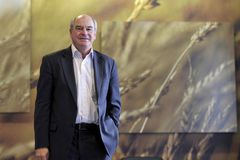