Prime Minister Stephen Harper has shut down Parliament for two months, killing a pesky inquiry into Afghan detainees, stalling government bills and allowing the Conservatives to take control of the Senate.

Mr. Harper called Governor-General Michaëlle Jean yesterday morning to ask her to give a Speech from the Throne on March 3 - delaying Parliament's return by 22 sitting days - and allowing the government to table a budget on March 4.

Wednesday's prorogation of Parliament sets up a number of confidence votes in the spring, at which point the opposition will determine whether Canada will go to the polls for the third time in slightly more than four years.

The Liberal Party slammed Wednesday's action as a politically opportunistic way to avoid scrutiny, but government officials said it is a routine move allowing for a two-week parliamentary truce during the Winter Olympics in February.

"Mr. Harper is showing that his first impulse when he is in trouble is to shut down Parliament," Liberal Leader Michael Ignatieff said.

More than 30 bills will die on the order paper, with more than half of them part of the government's tough-on-crime agenda. But the Prime Minister's Office said the goal is to continue focusing on the economy, with consultations on budgetary matters in the next two months.

"This is the time to recalibrate, consult and deliver the next stage of our plan that we outlined last year in Budget 2009," said spokesman Dimitri Soudas.

He said that Canada has done relatively well during the recent global recession, but said "we're not out of the woods yet."

Mr. Soudas added the government will file five vacancies in the Senate in the near future, providing the Conservatives with more seats than the Liberals in the Upper Chamber.

New Senate committees will be formed when Parliament is reconvened, putting the Conservatives in the driver's seat for the first time since Mr. Harper came to power in 2006. The government will still be short of an outright majority in the 105-seat Senate, given the presence of five independents, but will enjoy a "governing minority" with 51 seats.

But the opposition is particularly angry that the government, through prorogation, is shutting down the parliamentary committee into the treatment of Afghan detainees. NDP Leader Jack Layton said a sitting Parliament is the best forum to discuss Canadians' concerns over the recession and jobs, and that prorogation creates a democratic deficit in addition to the current economic one.

"Having a period of time prior to the budget, where you put the government's feet to the fire and press them on key issues, is a very normal and expected process, especially in a minority Parliament," Mr. Layton said. "I think Mr. Harper is making the wrong decision."

Mr. Layton refused to tip his hand as to how the NDP will handle future confidence votes. The Bloc Québécois said it does not have confidence in the Harper government, but added that it will wait to see the Speech from the Throne and the budget before deciding which way to go.

In the current minority government, the Conservatives need the support of one opposition party to survive. Mr. Harper has now prorogued Parliament twice since he won a second minority government in October, 2008, the first time occurred when he shut down the House in December, 2008, to avoid a no-confidence vote.

The government bills that are going down because of prorogation include the repeal of the faint-hope clause that gives lifers a chance of parole after 15 years, and the elimination of parole for non-violent offenders who have served just one sixth of their sentence.

Bills can be reintroduced in the new session, but prorogation delays their passage. However, private members' bills, such as Conservative MP Candice Hoeppner's bid to kill the gun registry, are not affected. 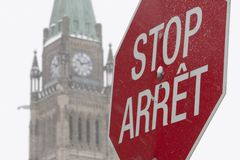