Andrea Horwath is the wild card in Ontario's election campaign. And it looks like she'll remain that way until all the votes are counted on Thursday night.

It is increasingly likely that the NDP Leader will hold the balance of power in a minority legislature – so much so that, as she prepared to announce a list of her party's priorities on Sunday, an official with another party predicted it would be her "ransom note."

Instead, Ms. Horwath re-announced the key components of her own platform. And in the process, she offered a reminder of what makes her such a gamble for voters.

Ms. Horwath is charming, and her slogan about "putting people first" is backed up by her down-to-earth demeanour. She is not by any appearances a policy wonk. It's often difficult to tell what in her own agenda excites or motivates her. When pressed on facts and figures, on how her policy promises would actually work, she can be tentative.

Campaigning on a slogan of "putting people first," she is a political strategist at heart. What will clearly drive her, given the choice of propping up Dalton McGuinty's Liberals or Tim Hudak's Progressive Conservatives, will be how to position the provincial New Democrats to win power in the future.

Ms. Horwath's willingness to set aside traditional NDP principles has been evident through the campaign. Her party's platform has maintained only what dogma, notably raising corporate taxes, can be framed in a populist context. It largely eschews traditional NDP values, such as social justice and environmentalism, in favour of competing with the Tories on pocketbook relief.

Her streak of pragmatism may be reassuring. With Mr. Hudak in the premier's office, she could probably find some common ground on making life more affordable, including taking the harmonized sales tax off hydro bills, and perhaps even on her protectionist buy-Ontario trade policy. With Mr. McGuinty, she could team up on home-care investments, and on flattening or lowering post-secondary tuition, while putting up with his green-energy policy.

That flavour of opportunism could be more troubling, though, on tougher issues. More so than any of the parties have been willing to admit, the next government will have difficult choices to make as it tries to reduce the province's $14-billion deficit amid looming economic turbulence.

Senior New Democrats have privately noted what happened in the United Kingdom, where the Liberal Democrats paid a political price for siding with David Cameron's austerity-minded Conservatives. With that lesson in mind, it's unlikely the NDP would give Mr. McGuinty or Mr. Hudak licence to do anything unpopular, which means tougher decisions could be punted years down the road.

Buffering the NDP's case against support for any controversial attack on the deficit would be its lingering support for raising corporate taxes. The Tories wouldn't go anywhere near that, and the Liberals would at least heavily resist, but the possibility of a corporate tax hike could be advanced by the New Democrats in any argument blocking other attempts to increase revenues or reduce program spending.

Ms. Horwath remains the least known of the province's major-party leaders, despite making a strong impression during the campaign. But she is not just the NDP's spokesperson; she is also its architect. Since she won the leadership in 2009, she has worked to change the party's culture, to persuade its members that being the conscience of the legislature is not enough to bring them out of 16 years in the political wilderness.

It's conceivable the NDP's influence could be wielded from within a coalition. But Liberal and PC sources both insist they want no part of any such thing, and in any event it's doubtful the New Democrats would hitch their wagon too tightly to either of their main rivals. A formal agreement with the Liberals would make them look like junior partners on the centre-left; playing too nice with the Tories would upset their base. The likeliest scenario, if the polls are correct, is that whichever party wins the most seats will get a limited chance to govern, with the NDP poised to bring it down at a moment's notice. 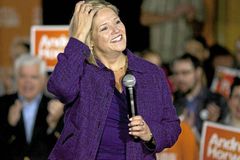 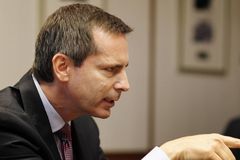 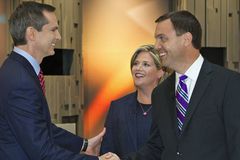 The contenders: An inside look at Ontario's potential premiers
September 30, 2011 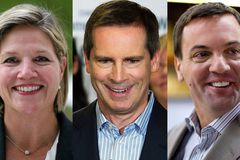