Ontario's schools are in turmoil, as teachers protest controversial legislation that will allow the government to impose tough new contracts if collective agreements meeting specific criteria aren't reached by Dec. 31. Provincial NDP Leader Andrea Horwath discusses whether the unions' actions are justified, and what she would do to restore labour peace.

You've supported teachers' right to strike to date. We're now hearing about a possible one-day walkout in January, which could be illegal if new contracts take effect at the end of this year. Would the teachers have the right to do that as well, do you think?

I certainly hope it doesn't come to that. I think if we end up there, then it'll be because the government's being stubborn, and they're not prepared to reopen the conversation.

But what happens if the government doesn't make concessions between now and Dec. 31? Are you saying that it would be an acceptable response for teachers to walk off for a day in January?

I'm not going to presuppose what teachers are going to do or what they're not going to do. What I can say is that the government has a role to play here to make sure that there isn't a further problem being created. Because the people who suffer most are kids and families.

Let's face it, the teachers put on the table the idea of zeros [in pay increases]. Yes, there are other issues that need to be addressed, but I believe they could have been addressed by bringing creative solutions to the table. I know that there were creative solutions being offered. But the government decided that they were going to take a ham-fisted approach, that they were going to put it as an ultimatum enforced through Bill 115. Well, now look where we are.

The government's argument would be that the teachers were offering zeros in terms of cost-of-living increases, but because of the salary grid and other factors, you'd still have a significant increase to the pay envelope. Do you disagree with the other things they've been pursuing – ending the banking of sick days, and either freezing the grid or doing unpaid days?

I wouldn't say that I agree or disagree with any of the specific pieces that the government put on the table to negotiate. The problem was that they didn't negotiate; they put them on the table as an ultimatum.

Do I think that all these things should be part of the conversation? Absolutely. Everybody knew that it was going to be a tough round of bargaining this year. But you have to negotiate. You can't bring ultimatums forward. You can't legislate away people's democratic rights. And if you do, you end up exactly where we are.

What are the options for the government after the Dec. 31 deadline has passed? If you were to wind up premier, would you tear up the new contracts and start anew?

That's the question that still remains: What's the lay of the land going to look like come January, February, March? What I can tell you for sure is that Bill 115 wouldn't be on the books if I were to form a government … I would certainly work to make sure that we have a way forward in terms of the existing situation and also the future contracts that are going to be negotiated.

So to be clear, you would reopen talks on contracts that take effect in the new year?

To be frank, it's hard to unscramble an egg. There's already some collective agreements that have been ratified. Do I throw all that out? I don't think that's possible.

It's going to be one hell of a mess, there's no doubt about that. How we address it going forward depends on each situation separately. I don't know whether the government's going to invoke Bill 115 come December 31 and impose those contracts – I have no idea. And I don't think anybody does. That's why I would advise the government that they need to use this little window that we have left and try to pull this back a bit and get some talks going.

In high schools, we're seeing services withdrawn in ways that could have a really severe impact on kids' futures. There are reports, for instance, of teachers not writing recommendation letters for students looking to get into universities. Even if you place the bulk of the blame with the current government, is there a line that has to be drawn in terms of what is or isn't acceptable action?

The thing that I find quite interesting is that the government's prepared to risk all that stuff by stubbornly sticking to a completely failed process.

I know for sure a lot of teachers are having a difficult time with these kinds of decisions. But the imperative is with the government to make sure that this group of students doesn't end up being so negatively affected. It is specifically the decisions that our government has made that have led to this situation.

So you think, based on the government's behaviour, that the actions thus far by teachers are justified?

I think that where we ended up is where you end up when two sides don't agree and there's a lack of willingness to actually negotiate, and when there's an imposition by one side with more power over the other.

I don't think that these kinds of things are something that anybody wants to see, but at the same time I don't think it's unexpected, and the government should have realized that this is where we were headed. 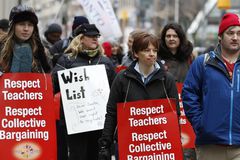 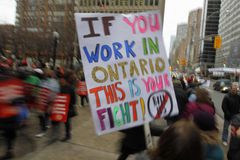 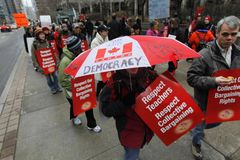 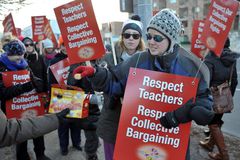 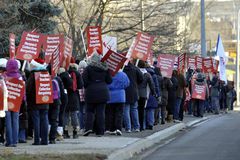