Economists have been scratching their heads for weeks as to how the Conservative government could claim on budget day that Canada's job vacancy rate was on the rise when Statistics Canada said it was declining.

The answer, it appears, is that Finance Canada's numbers were thrown off by data from a surprising place: questionable job postings on Kijiji, a popular classified site used by Canadians to buy and sell everything from rarely used exercise bikes to old electronics.

Officials with the Parliamentary Budget Office say Kijiji is so unreliable as a job site that it can single-handedly explain away the government's claims. With the simple removal of that one site from the search, the steep rise Ottawa flagged becomes much closer to a flat line.

"We expect they will probably review their report," said Jean-Denis Fréchette, the Parliamentary Budget Officer. Another PBO official said removing Kijiji would have a "big time" impact on Ottawa's job vacancy numbers.

Mr. Fréchette is referring to Finance Canada's 54-page "Jobs Report" that was released alongside the Feb. 11 budget. In it, the government claimed that Canada's labour market has a job vacancy rate that has been "increasing steadily since 2009."

The main source of that information is a company called Wanted Analytics, which uses software to send Web spiders across all known online job sites to create a database of available jobs.

The Conference Board of Canada also uses Wanted Analytics for a similar statistic called the Help Wanted Index, but recently looked more closely at the numbers. It found postings from Kijiji were overly volatile and removed them as a source. As a result, the help-wanted trend moved from a rise similar to the one found by Finance Canada to become a generally flat line.

Finance Canada declined to comment on whether it will follow the Conference Board and revise its data.

"The Department of Finance is aware of the Conference Board report and will analyze it," said spokesperson Stephanie Rubec.

The revelation comes amid a major debate over the reliability of labour statistics in Canada. The Conservative government has said job vacancies and skills mismatches are a problem the country must tackle and is launching a national skills training subsidy called the Canada Job Grant.

The problems with Kijiji came to light only Monday evening when the Conference Board alerted the Parliamentary Budget Office that it was revising its data. The PBO, which was preparing to release a report on Canada's labour market the next morning, worked late into the evening to incorporate the changes.

Conference Board economist Julie Ades confirmed to The Globe that the board recently revised its data after removing Kijiji because of the "instability" that source was creating.

The PBO reported on Tuesday that there is little evidence in support of a national labour shortage or skills mismatch in Canada.

"If this is something they perceive, then fine," said Mr. Fréchette, in reference to the Conservative government's focus on skills shortages. "There's nothing wrong to inject money for better training for employees and so on. That's something that is always good, but the reason behind it has to be really clear."

Federal Employment Minister Jason Kenney stressed that Ottawa's concern is about shortages in specific regions and sectors. Industry groups responded by insisting labour shortages are real and poised to worsen over time and that data must be improved.

Further, the PBO report on Canada's labour market found median real wages have stagnated since the end of the recession, while average real wages have increased, meaning only higher-income earners are seeing wage increases.

The report also takes aim at the potential impact of the controversial temporary foreign worker program.

"It is also worth noting that a higher portion of temporary foreign workers in the private sector could also be putting downward pressure on the private-sector job vacancy rate," the report states.

Kevin McQuillan, deputy provost and professor of sociology at the University of Calgary, has written a paper challenging claims of a Canadian labour shortage and says the move to online job postings continues to give statisticians headaches.

"We are struggling to deal not only with changes in the labour market, but changes in how people hire," he said. "We haven't really gotten on top of this new way of hiring that's done in online postings, [where] the same notice of a job appearing on multiple sites, or social media. So counting that can be difficult." 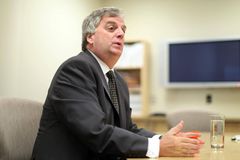 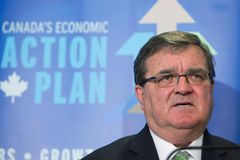 Opinion
No easy answer to underemployment of twentysomething men
March 21, 2014 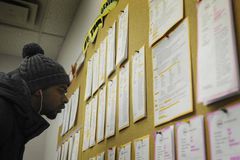 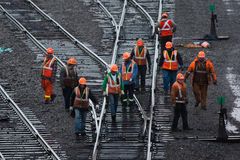 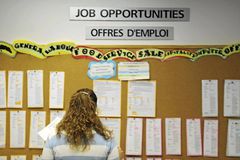 Follow Bill Curry and Tavia Grant on Twitter @curryb @taviagrant
Report an error Editorial code of conduct
Due to technical reasons, we have temporarily removed commenting from our articles. We hope to have this fixed soon. Thank you for your patience. If you are looking to give feedback on our new site, please send it along to feedback@globeandmail.com. If you want to write a letter to the editor, please forward to letters@globeandmail.com.
Comments