Dalton McGuinty made a brief stop at the Gardenia Restaurant in Strathroy the day before voters went to the polls.

The Liberal Leader was trying to preserve the seat held by Maria Van Bommel in Lambton-Kent-Middlesex, a rural riding just west of London.

He was greeted last Wednesday afternoon by protesters, including one waving a sign reading, "Gadhafi, McGuinty: Dictators with Green Revolutions." Local residents were unhappy about a number of issues, but close to the top of the list was the McGuinty government's plan to erect industrial wind turbines in their community.

Ms. Van Bommel lost on Thursday evening, one of seven Liberal incumbents who went down to defeat in rural ridings where green energy and wind turbines were major issues. And they were not all backbenchers. Among the casualties was the agriculture minister (Carol Mitchell), the education minister (Leona Dombrowsky) and, most symbolically, the environment minister (John Wilkinson). The Progressive Conservatives won all seven of those seats.

Many factors were at play in these rural ridings during the campaign, but the one that cut across all regions was opposition to the Liberals' plans to erect wind turbines. The Liberals, who fell just one seat short of winning a third majority, clearly got punished in rural Ontario over their drive to push renewable sources of energy – the centrepiece of their job-creation strategy.

The green-energy file will now be at the heart of Mr. McGuinty's biggest challenge: shepherding his vision for transforming Ontario into a clean-energy powerhouse with a minority government for the next four years.

In a news conference on Friday, Mr. McGuinty ruled out negotiating with opposition leaders, saying his "major minority" gave him a strong mandate to pursue his agenda.

Progressive Conservative Leader Tim Hudak had vowed to scrap a multibillion-dollar contract at the centre of the McGuinty government's green-energy plan and generous incentives for developers of wind and solar power. The controversial deal with South Korean industrial giant Samsung Group dominated the only televised leaders' debate during the campaign.

Mr. Hudak has put Mr. McGuinty on notice that he will be on a short leash around the provincial legislature.

"No longer can Dalton McGuinty make unilateral decisions without reaching out for support," he said on Friday.

Mr. Hudak put the province's green-energy policies in the forefront of his platform, although he never directly engaged in any discussions on the placement of wind farms and their giant turbines.

Instead, he decried the way the Liberal government paid generous incentives to developers of green energy that will drive up hydro bills in the province once the projects are up and running.

"We simply cannot afford these rich contracts," Mr. Hudak said. "You can't tax your way to prosperity. You can't spend your way out of debt. And you can't divide your way to a better future for all."

The groups opposing wind turbines are on one side of the rural-urban divide in Ontario. They complain that bureaucrats at Queen's Park make decisions that are unpopular in rural communities. Mr. McGuinty said the Samsung deal alone will create 50,000 jobs in Windsor, London, Tillsonburg and Toronto.

John Leforet, president of Wind Concerns, said the loss of Liberal seats was "a clear rejection of the Green Energy Act by rural Ontario."

A Liberal official dismissed Wind Concerns as a "bizarre little group" that joined forces with the Progressive Conservatives to campaign against the Liberals' clean-energy policies.

"They opposed the jobs and the cleaner air that we have been building in the growing clean energy economy," the official said.

Three races where a cabinet minister was defeated

What happened: The winds of change literally blew through this riding, with Ms. Thompson campaigning hard against wind energy projects. What started as a sleeper issue came to dominate the debate, and led to the ouster of a high-profile McGuinty cabinet minister.

What happened: While the largely rural riding has been divided by the prospect of wind farms along Lake Ontario, the Liberals may have underestimated how deep the division ran. When Ms. Dombrowsky tried to defend the party's placement of turbines during a local debate, she was booed. 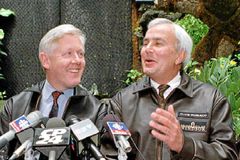 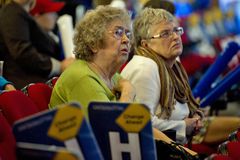