The Canadian government is fond of repeating that Canada is the most important foreign market for 35 U.S. states, in an effort to head off rising American protectionism, and this statistic came up several times during a crucial first meeting Monday between Prime Minister Justin Trudeau and President Donald Trump in Washington. But this calculation of the benefit Canada provides to its southern neighbour glosses over the fact that the United States, with ten times the population, is far less reliant on foreign trade in general. 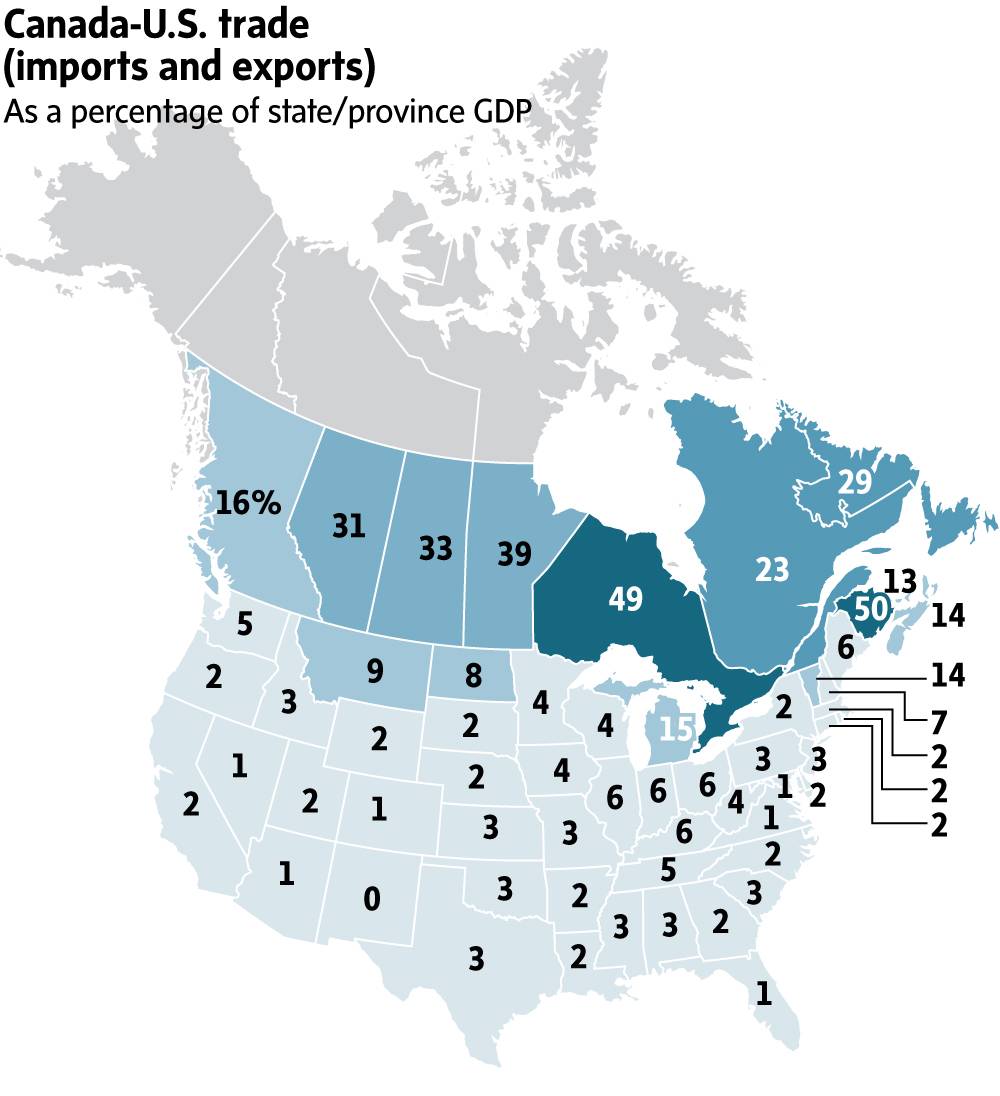 Map 1: There are only two U.S. states – Michigan and Vermont – where trade with Canada exceeds 10 per cent of their annual economic output, according to University of Calgary economist Trevor Tombe.

According to Trevor Tombe, a University of Calgary economist, there are in fact only two American states out of 50 – Michigan and Vermont – where trade with Canada exceeds 10 per cent of their annual economic output.

By comparison, Canada's provinces are in large part overwhelmingly dependent on keeping the borders open with the U.S. Forty-nine per cent of Ontario's gross domestic product depends on trade with the United States. For Quebec, that number is 23 per cent. For Alberta, it's 31 per cent.

Professor Tombe's calculations divided the value of cross-border import and export trade in each state or province by the jurisdiction's gross domestic product. He used data from the U.S. Census Bureau, Canada's Innovation Department and the U.S. Bureau of Economic Analysis.

Canadian businesses would do well to remember this as the Trump presidency unfolds. Mr. Trump signalled an protectionist approach to international trade on the day he took office last month, saying "from this moment on, it's going to be America first."

This sets the tone not only for his demand to renegotiate the North American free-trade Agreement, but also for his Republican allies in Congress and every U.S. government department seeking to expand its role in policing the Canada-U.S. border.

How big a hit will Canada receive?

As Mr. Trudeau prepares to renegotiate the North American free-trade Agreement, the Canadian leader still cannot be certain how much of an economic bruising Canadians will face under the new U.S. President or a Republican Congress.

Will Canada escape relatively unscathed, as Trump adviser Stephen Schwarzman and former Republican heavyweight Newt Gingrich have assured? Mr. Trump himself on Monday told a news conference with Mr. Trudeau that the United States will only "tweak" trade ties with Canada.

Or will Canadian goods face a border tax, such as the one proposed by House of Representatives Speaker Paul Ryan, and find its preferential access to the United States downgraded by a Trump-led approach to extract better terms under NAFTA?

Mr. Trump's America-first trade policy has the potential to embolden protectionism within Congress as well as empire building among U.S. government departments, all of which want to expand their influence at the Canada-U.S. border.

One thing is for certain: Few Canadians alive have experienced a serious trade conflict with Americans.

Canada has relatively little leverage when confronting a hostile trade action. It has potential allies – U.S. governors of border states and American chief executives who conduct significant business with Canada – but only selective leverage over the United States, and few, if any, ace cards.

Trade experts say, however, that if Canada is backed into a corner by U.S. measures to restrict or block shipments to that country, it must only threaten retaliation if it is prepared to deliver.

"If we say we're going to do something – and then they act – and we don't do something, then we lose all credibility in the future," said John Weekes, Canada's former chief negotiator for NAFTA, adding it's still unclear what Washington has in store.

Stomach for a trade war?

Recent polling suggests a majority of Canadians are prepared to endure a trade war if necessary.

A Nanos Research survey, conducted between Jan. 26 and Feb. 1, found that 58 per cent of Canadians surveyed would "support" or "somewhat support … Canada having a trade war with the U.S." if the Trump administration slapped new tariffs on goods from Canada.

Only 35 per cent were opposed or somewhat opposed. Veteran Canadian trade consultant Peter Clark said he believes Canadians who talk tough to pollsters may be overestimating Canada's bargaining power with their neighbour.

"The Americans just have to increase their own production 10 to 15 per cent to replace what we provide them, generally." He said fights over softwood or shingles or wheat in decades past are mere skirmishes compared with the much bigger conflict that could arise if Canada and the United States get into a tit-for-tat war over border taxes.

"Nobody understands what a real trade war is."

There has not been a knock-down, drag-out trade war between Canada and the United States since the early 1930s, after Washington, under the Smoot-Hawley Tariff Act, raised tariffs on many foreign goods and triggered a global backlash. The government of Mackenzie King reacted by slapping retaliatory taxes on American goods and reducing tariffs on goods from Britain. The Liberals lost the ensuing Canadian election and were replaced by the Conservatives, under Leader Richard Bedford Bennett, who hiked tariffs on American goods even further.

How many American jobs rely on trade with Canada?

One glaring difference between the Canadian government and the American government is how they count the impact of Canadian trade on U.S. jobs – a statistic that should be a powerful selling point for Ottawa as it defends its interests in Washington.

There are different ways to measure the job benefits, of course, but it's striking that two key government departments – one in the United States and one in Canada – have chosen dramatically different figures.

The Canadian Department of Global Affairs says, on its main Canada-American relations page, that "nearly nine million U.S. jobs depend on trade and investment from Canada."

And yet, the Office of the United States Trade Representative – the department charged with negotiating trade for Washington – counts it differently. As does the Department of Commerce, where Mr. Trump's pick for secretary, Wilbur Ross, will be charged with renegotiating NAFTA.

"According to the Department of Commerce, U.S. exports of goods and services to Canada supported an estimated 1.7 million jobs in 2014," the U.S. government says. The Canadian government declined to provide an on-the-record explanation of why Canada and U.S. estimates differ so drastically, but a federal official, speaking not for attribution, said Ottawa's count uses a different methodology that takes a broader measure of the impact of jobs.

Canada's biggest asset may be business leaders and politicians in border states, notwithstanding the minimal impact that Canadian trade delivers for the GDP of most U.S. states.

Trade experts say Canada's recourse, if it faced punitive tariffs on shipments to the United States, would be selective retaliation. In other words: hitting the Americans back.

This can be slow going and difficult to enact. Canada would have to complain to the World Trade Organization (WTO) and wait for a ruling that gave it authority to slap retaliatory tariffs on the Americans. It took six years in the case of a fight with Washington over U.S. meat labelling rules that forced foreign beef and pork to be sold with stickers detailing its origin. U.S. feedlots and packing plants were also required to keep Canadian livestock and meat separate.

Or, Canada can choose to ignore the rules and threaten retaliation right away, as it did in 1994 before the WTO came into being when, under then-agriculture minister Ralph Goodale, the Liberals threatened to punish imports of fruit, vegetables, soybeans and wine.

In both cases, the threat of retaliation worked – albeit slowly. And in the case of the country-of-origin dispute, it helped that Mexico was also poised to retaliate.

Former Canadian government officials said it's very difficult to pick retaliatory targets. In the past, including in 2005, when Canada was angry at a U.S. law – the Byrd Amendment – that funnelled cash collected from tariffs on foreign goods to U.S. companies, Ottawa drew up a list that targeted the states where U.S. politicians voted for the legislation.

"You try to pick things where it will have a maximum political impact in the other country and a minimal impact on Canada," said Mr. Weekes.

In the 2005 case, the Paul Martin government was forced to abandon some retaliatory targets – such as U.S. motorboats – because of push-back from Canadian industry. Its final tariff list included some very narrow American imports, such as tropical fish.

Mr. Clark said it's too soon to determine whether Mr. Trump's promise of merely tweaking NAFTA for Canada will be borne out. "What may be a tweak for Uncle Sam could be much more serious for us," he said.

The Americans may consider it merely a minor request to gain more duty-free access to Canada's dairy or chicken market, for instance, said Mr. Clark, who advises dairy farmers on trade matters. 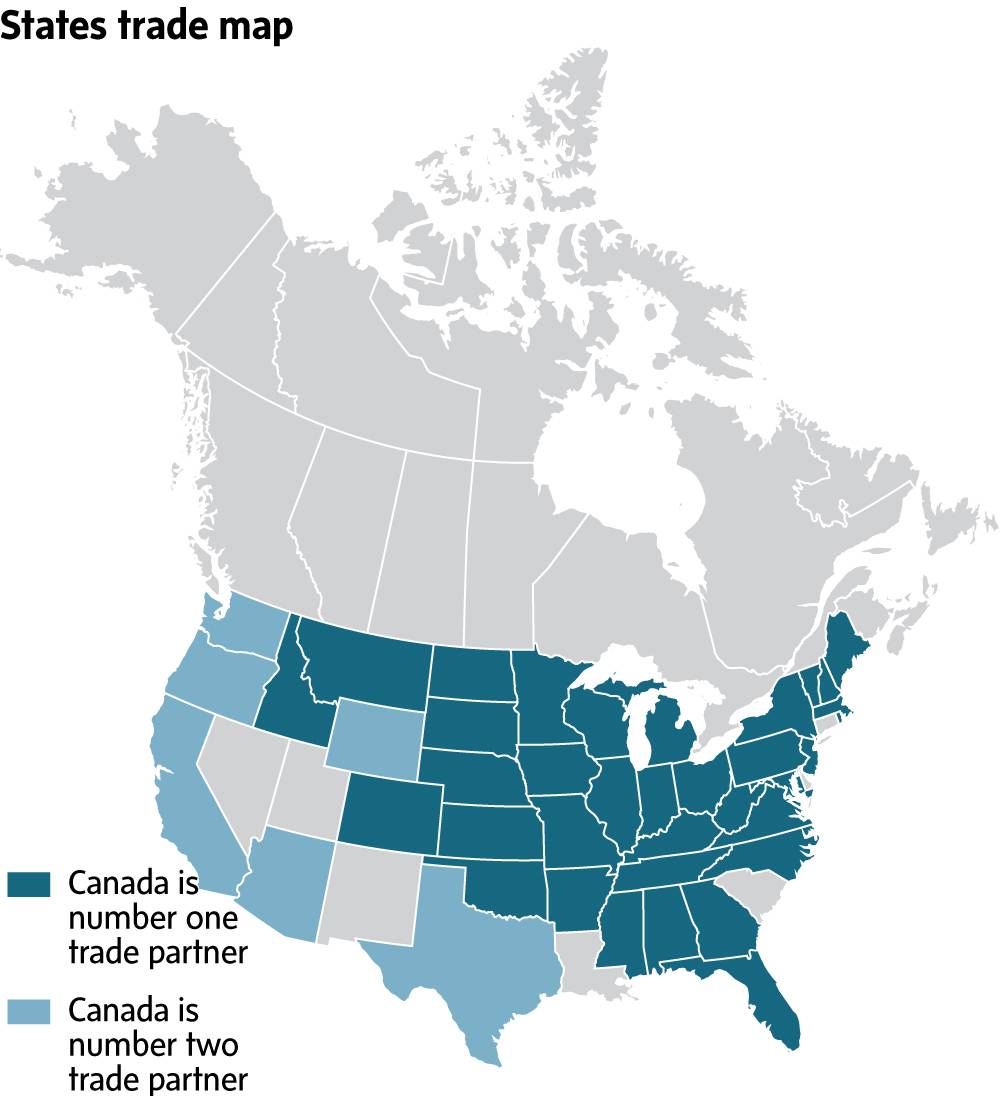 Map 2: For years, the Canadian government has repeated its claim that Canada is the most important foreign market for 35 U.S. states. This map is posted on a government website that promotes trade. 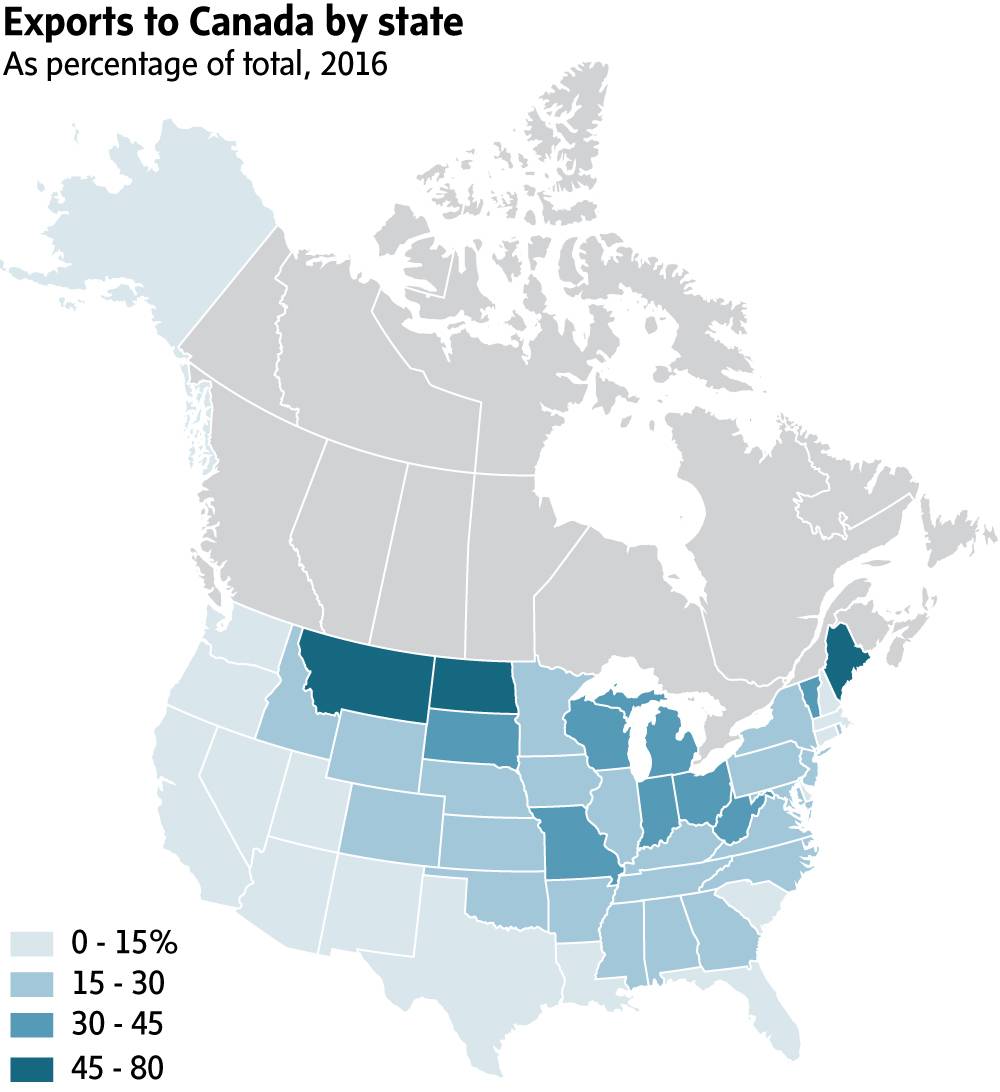 Map 3: This map, using data retrieved from the U.S. Census Bureau, shows Canada's share of total U.S. exports, by state. It shows that, for a majority of states, less than 30 per cent of total exports go to Canada.

Trump vows to only tweak Canadian NAFTA provisions after Trudeau meeting
February 13, 2017
Opinion
Trump and Trudeau: A good, successful first date
February 13, 2017
Trudeau, Trump vow to tighten energy ties, starting with Keystone
February 13, 2017
Follow Steven Chase on Twitter @stevenchase
Report an error Editorial code of conduct
Due to technical reasons, we have temporarily removed commenting from our articles. We hope to have this fixed soon. Thank you for your patience. If you are looking to give feedback on our new site, please send it along to feedback@globeandmail.com. If you want to write a letter to the editor, please forward to letters@globeandmail.com.
Comments