During his high-profile appearance on YouTube this week, Prime Minister Stephen Harper was asked if his government is willing to take strong action to combat global warming.

"That's why we are investing in things like carbon capture and storage. We have the green infrastructure fund in our economic stimulus program, we have a series of what we call ecoEnergy initiatives to encourage the development of new technology and energy efficiency."

All of that is true, although the PM failed to mention that ecoEnergy, which channels funds to renewable sources such as solar and wind power, will expire next year, and this month's federal budget contains no sign of a replacement.

Carbon capture and storage, meanwhile, has been dismissed by environmentalists as little more than a subsidy for the oil and gas industry. "It's a dead-end technology," says University of Victoria scientist Andrew Weaver, a world leader in climate modelling, "that is very clearly not a solution to anything."

As well as ending ecoEnergy (the United States now spends, per capita, 18 times as much as Canada does on developing renewable resources), the new budget has cut federal investment in climate research.

Clearly the Conservatives feel it's safe now to disengage from the battle against climate change - a battle they didn't want to wage in the first place. But are they wise to do so?

Mr. Harper came to power four years ago fully intending to dismantle programs aimed at reducing greenhouse gases. The outgoing Liberals, he said, had set unrealistic targets and then failed to meet them. His government was not about to offer lip service to a crusade that Conservatives deemed overblown and out of step with the folks on Main Street.

A few months later, the folks on Main Street told the Prime Minister that he had them pegged all wrong.

Al Gore was on screen proclaiming his "inconvenient truth," Canada was experiencing weird winter weather, and by January, 2007, the polls said that climate change had become the number one concern of Canadians, outdistancing such staples as the economy and health care.

So, with all the zeal of a conscript, Mr. Harper joined the fight against global warming. He replaced his environment minister and scrapped the first attempt at an environmental policy in favour of a plan to cut carbon emissions by 2020. The move was panned by environmentalists but seemed to please ordinary Canadians.

WHEN THE TIDE TURNED

Then the economy began to slide. Anxiety about lost jobs trumped the angst over climate change and, by June, 2008, the polls showed Canadians were more worried about the price of gas than the output of industrial carbon.

That fall, the markets tanked, and Mr. Harper was forced to turn his attention to fiscal matters. As the federal deficit swelled to $56-billion, measures to cope with climate change just didn't seem so important any more. The Conservatives were able to settle into an environmental groove far more suited to their traditional philosophy.

So, as other countries tackled the downturn by pouring stimulus money into renewable energy, Canada invested in municipal infrastructure.

Then came what some people like to call "Climate-gate." Pirated e-mails from the Climatic Research Unit at the University of East Anglia in Great Britain suggested that some of the research underpinning global-warming theories had been fudged. The scandal - despite the cries from researchers that the "smoking guns" were words taken out of context - further diminished the clout of those urging action.

Mr. Harper attended, reluctantly, the big climate-change conference in Copenhagen in November, but stood firm on his position that Canada had little room to toughen its commitments to reduce emissions.

Now the budget has made it official - and the political roof hasn't exactly fallen in.

But even if concern about

climate change has diminished, it has not disappeared - especially among Canadians outside Mr. Harper's support base, the ones he needs to attract if he's ever to win his coveted majority.

A recent poll conducted by Harris/Decima for the Manning Centre for Building Democracy suggests that the environment is the one area in which there is a clear divergence of opinion between mainstream voters and the conservative base. The poll says the mainstream values environmental protection highly while conservatives do not.

In a letter this month to Montreal's La Presse newspaper, Conservative MP Maxime Bernier expressed skepticism that human activity even is the leading cause of warming.

"What is certain," he wrote, "is that it would be irresponsible to spend billions of dollars and to impose unnecessarily stringent regulations to solve a problem whose gravity we still are not certain about."

Dismissing the issue that blatantly may alienate the voters Mr. Harper needs. What's more, even among the Conservatives, there are believers.

One of them is Environment Minister Jim Prentice, who has had to walk a fine line since being handed the portfolio more than a year ago.

Carbon emissions contribute "to the accumulation of carbon in the atmosphere which, in some way, is connected to climate change," he said this week. "There are many opinions on how much, and so on."

He also says that even though the budget delivered no cash to tackle climate change, he can use tighter regulations to reduce carbon emissions.

Another believer is Preston Manning, who as leader of the Reform Party employed Mr. Harper as chief policy adviser.

"Are there negative environmental consequences through the production of various forms of energy?" he asks, "I don't think that anybody would disagree with that."

Conservative politicians should, according to Mr. Manning, seize upon environmental issues such as climate change, and use them against the federal Liberals who, he says, did little to reduce carbon emissions until the dying days of their 13 years in office.

And, he says, there are conservative solutions that could be employed.

"You attach a price to pollution, or a price to a resource, which then brings it into a market which will allocate it more efficiently," he explains.

"Because Conservatives profess to believe in markets and have done a lot of work on how do you make markets work, I think the harnessing of that horse to the environmental-conservation cart could be a signature contribution of conservative people."

Does that mean bringing in a carbon tax? "I am talking about pollution pricing," Mr. Manning says. "One way of doing that is through cap-and-trade, through a carbon tax. I don't like the word 'tax' because it turns the public off."

Others don't share Mr. Manning's optimism that the Conservatives can carve out an environmental constituency.

Nik Nanos, president of the polling firm Nanos Research, sees little gain for Mr. Harper if he veers from his present course. Not only does the environment usually rank third "after jobs and the economy and health care," he says, it is the kind of concern that flares but then subsides again.

In any event, Mr. Nanos adds, Conservatives will never be perceived as environmental champions: "Most parties have what I call core-brand strengths and weaknesses. And the environment is what I would call a brand issue for Conservatives. Regardless of what they do, people will think by default that the Conservative Party is not strong on the environment just because of its track record."

Perhaps, but no government can afford to walk away from climate change forever, says Bill McKibbon, founder of 350.org, a U.S.-based international climate campaign.

"It's a great shame to see Canada, to whom many of us have looked for leadership, outdoing even the U.S. in its timidity," he says. "The financial power of the tar sands have played no small role, would be my guess."

"Of course," he argues, "this abdication of responsibility is only temporary. The Harper government isn't fighting with Liberals - it's fighting with chemistry and physics."

Gloria Galloway is a member of The Globe and Mail's parliamentary bureau.

Opinion
It's a tough climate for Elizabeth May and the Greens
March 17, 2010 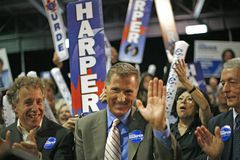 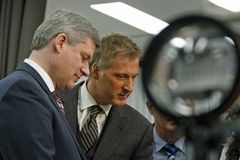 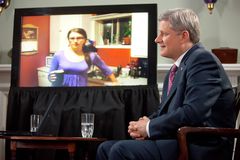