From the urban wilderness of Stanley Park to the glistening steel and glass towers in booming Yaletown, Vancouver Centre is a riding that has long been seen as a central piece in the battle for British Columbia.

And for 18 years running, one candidate - Liberal, Hedy Fry - has owned the seat. She did so again Monday night.

The only other riding where the Liberals took a seat in British Columbia was adjacent Vancouver Quadra, where Joyce Murray was the incumbent.

Dr. Fry, a physician who rose to prominence when she knocked off a sitting prime minister, did not take victory for granted.

"I always do have a case of nerves," she said with a laugh, Monday, as she waited for the polls to close.

You might think after six victories in a row Dr. Fry would have a read on Vancouver Centre. But she said you just never can tell.

"Nobody knows what is going to happen," she said as voters lined up at polls just before closing time.

At the heart of the riding, where the First Baptist Church sits at the corner of Nelson and Burrard Streets, the sign lingering from the Sunday service might have been directed right at the electorate.

"What road? Which direction?" it asked.

Over the years there have been different answers, as the vote has swung back and forth between Liberals and Conservatives.

Ron Basford, who sat in cabinet for Pierre Trudeau; held it for three elections; Pat Carney, a powerful Conservative minister for Brian Mulroney, was in for two terms and Kim Campbell, Canada's first female prime minister, held it for one.

Ms. Campbell lost the seat in 1993 when the Conservatives got caught in an electoral downdraft - and she ran up against Dr. Fry, then making her first foray into politics.

She seemed immensely popular on the street, however, even as voters cooled to her leader nationally.

"I think they'll have to dub me 'Huggable Hedy,' " she said. "Everybody wants to hug. It's that kind of election. There is a personal sensitivity about it that I've never seen before. I mean people have not always wanted to come up on the street and hug me. But there just seems to be some personal feelings and emotions involved in this campaign that I have not really ever seen before."

Voters, however, came very close to electing an alternative. Conservative Jennifer Clarke trailed in a close second for most the night, until NDP candidate Karen Shillington edged into that position, with just over half the polls reporting.

Dr. Fry had campaigned this time the same way she has in the past. Tirelessly. She seemed to be everywhere, all the time.

An old veteran, but not one who couldn't learn new tricks, as she demonstrated when it came to social media.

Dr. Fry posted 894 tweets during the campaign and had 3,007 followers. Adriane Carr, the savvy Green candidate who on Sunday boldly tweeted, "Groundswell of support. Van Centre is going Green," had 134 tweets in total, and just 504 followers. Ms. Clarke, a three time city council member (136 tweets; 190 followers) and Karen Shillington, NDP (31 tweets and 69 followers) were far behind.

Ms. Carr, who finished fourth in 2008, said she was running to win this time, not merely to move up the charts.

"The best campaign ever," she said. But in the end she again finished fourth.

Ms. Clarke wasn't available for an interview throughout the day, Monday. She was too busy "working non-stop on votes," said a staffer.

In Vancouver Centre that's the only way to win. And nobody knows that better than Dr. Fry. 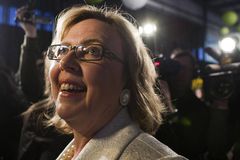 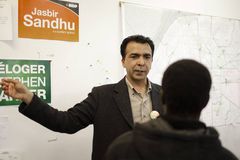 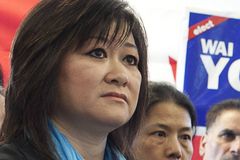 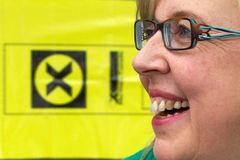 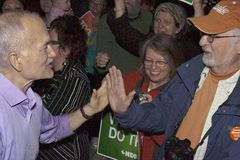 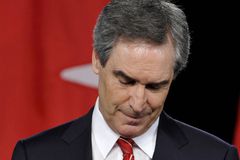