Hunter Tootoo's inappropriate sexual liaison with a young staffer spiralled out of control when the former fisheries minister broke off the affair so he could pursue a committed relationship with the young woman's estranged mother, sources say.

Two sources said the staffer was unaware Mr. Tootoo had been dating her mother and that the relationship had become serious. The mother also had no idea Mr. Tootoo was having an affair with her daughter, whom he had hired to work in his Parliament Hill office.

Mr. Tootoo informed the young woman he was ending their relationship before he flew to Winnipeg for the Liberal Party's bi- ennial convention on the weekend of May 26-29, according to a source.

On Sunday, May 29, the young woman, who was distraught and apparently had been drinking, began to throw things around in Mr. Tootoo's Parliament Hill office in the Confederation Building. A House of Commons security guard managed to calm the sobbing young woman.

Mr. Tootoo was informed of what happened, and after discussions with senior staff and close friends, he arranged a meeting with Prime Minister Justin Trudeau on May 31. He told the Prime Minister he had a serious drinking problem that had led him into an inappropriate affair with one of his female staff.

At the time of his resignation, Mr. Tootoo had cited the need to seek treatment for an alcohol problem as the reason he voluntarily left the Liberal cabinet and caucus. It was only after The Globe and Mail revealed the affair with his female aide in late July that he admitted he had a "consensual but inappropriate" relationship with a woman whom he did not identify.

In an interview last week with CBC chief anchor Peter Mansbridge, the now Independent MP explained what happened when he informed Mr. Trudeau.

"I surprised him, I surprised everyone. I knew I had to go in there and let him know my decision and what happened. I was going in knowing that I had let him down," Mr. Tootoo said in the CBC interview. "He gave me a hug. He's an amazing individual."

The Prime Minister's Office has said Mr. Trudeau kept quiet about the real reason for Mr. Tootoo leaving cabinet to protect the identity of the staffer, for whom the Liberals have since found new employment.

Mr. Tootoo said he did not disclose his battle with alcohol during the cabinet vetting process conducted last fall by the Privy Council Office, the RCMP and Mr. Trudeau's transition team, headed by Peter Harder, now the Liberal Government Leader in the Senate.

Mr. Tootoo revealed to Mr. Mansbridge that he had a troubled upbringing in a family where alcohol abuse was a serious problem. He also said he was sexually and physically abused as a child, and as a teenager had tried to take his own life.

Mr. Tootoo's confession appears to be an attempt to repair his tattered image so he can return to the Liberal caucus. Mr. Trudeau's office has not said whether Mr. Tootoo would be allowed back, but one high-level source said it was unlikely.

No one incident led to Tootoo’s resignation, Trudeau tells Liberal MPs
May 16, 2018 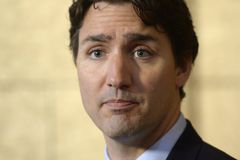