It was a debate with no clear winner – or loser – but one that highlighted policy and style distinctions between the leaders of Canada's four main national parties.

Conservative Leader Stephen Harper remained statesmanlike and unflappable, despite being the prime target of attacks by his three opponents.

And Green Party Leader Elizabeth May proved that she can be the smartest person in the room.

Here are some of the most notable exchanges. 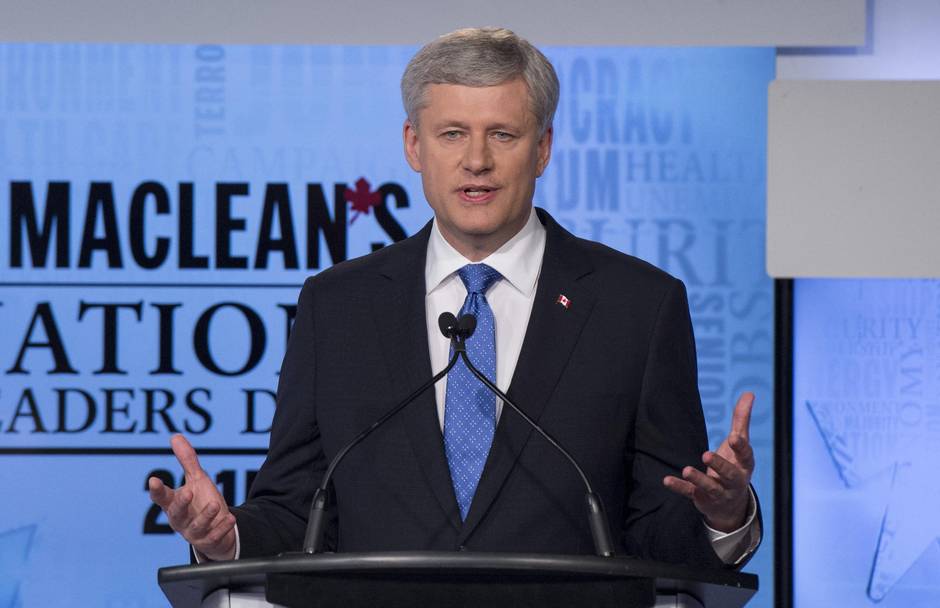 Harper: “I’m not denying that.”

The economic portion of the debate focused largely on the Conservative record, with the leaders throwing out contradictory numbers to suggest things are either better or worse than Canadians have been led to believe.

At one point, Mr. Mulcair accused Mr. Harper of trying to deny statistics that show the economy has been shrinking for five months in a row.

“We are one month away from a technical definition of recession, but according to a lot of observers, we’re already in a recession,” Mr. Mulcair charged.

Mr. Harper tried to squeeze in a reply. “I’m not denying that,” he said. “What I am saying is that that contraction ...”

To which Mr. Mulcair quickly piped in: “You’re not denying that we’re in a recession. That’s good.”

Mr. Harper then said he was referring “almost exclusively” to the energy sector. 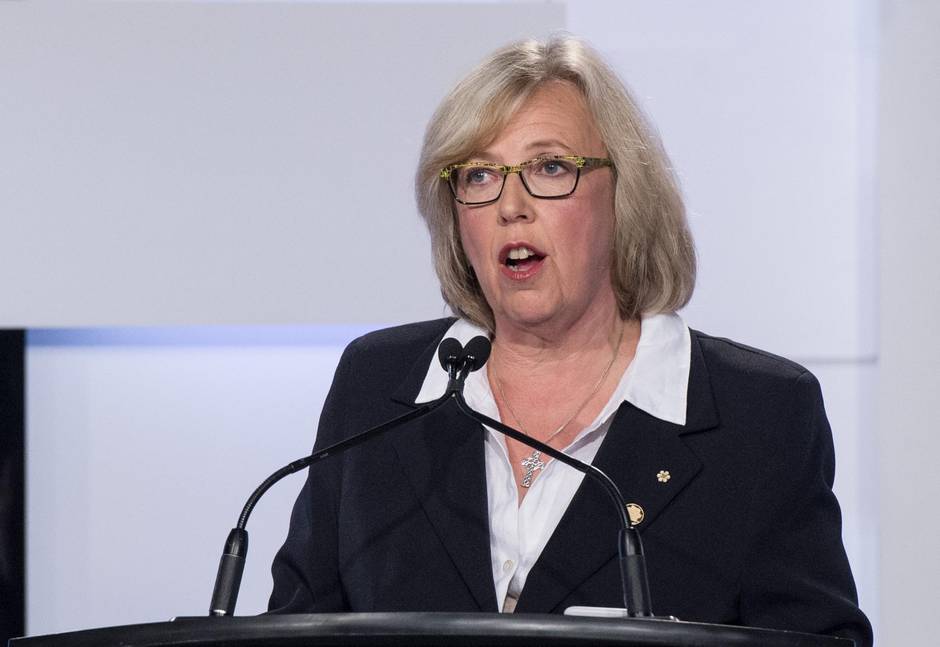 May: “There’s just not credibility at this point.”

It is a bad idea for any politician to challenge the Green Party Leader on environmental issues because she knows the numbers. When Mr. Harper boasted about the “rigorous environmental assessment” to which pipeline projects are subjected, Ms. May lit into him.

She pointed out that he committed in 2008 not to send unprocessed bitumen to countries with weaker emissions standards than Canada, but is supporting pipelines that would deliver that material to China.

And, said Ms. May, he personally signed the Copenhagen agreement on climate change, which commits the government to specific greenhouse-gas reduction targets by 2020 that the Environment department says Canada is nowhere close to meeting.

“There’s just no credibility at this point,” said Ms. May. “Canada needs to take action.”

Moderator Paul Wells then asked Mr. Harper whether Canada would meet the 2020 targets. The Conservative Leader replied: “I – I believe we will, but we now are focusing on a 2030 target.” 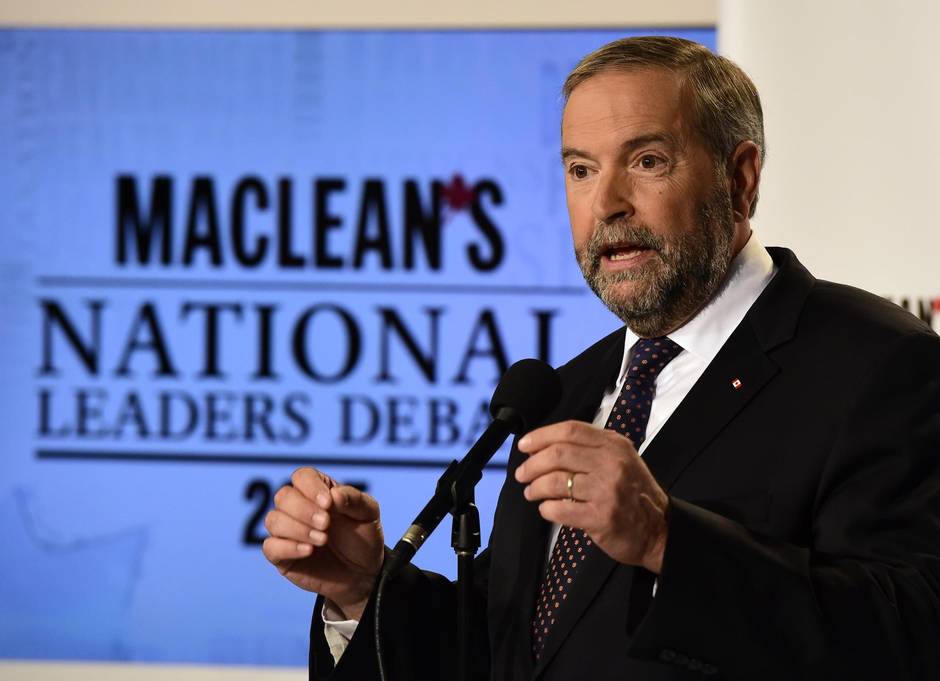 Mulcair: “Opposing these pipelines systematically in advance is just as wrong as supporting them.”

The Green Party Leader also turned her sights on Mr. Mulcair, saying her party is the only opponent of the Kinder Morgan pipeline that would reach tankers in Vancouver and send them to sea, loaded with bitumen.

“Will you join us and fight against the risky pipeline and tanker expansion tripling the transport of unprocessed oil from Vancouver? Will you help us defend our coastlines?” she asked Mr. Mulcair.

“I share the same concerns as Ms. May with regard to the Kinder Morgan pipeline that she just talked about ...” he replied.

“See, here’s the difference,” said Mr. Mulcair, “Opposing these pipelines systematically in advance is just as wrong as supporting them ...” 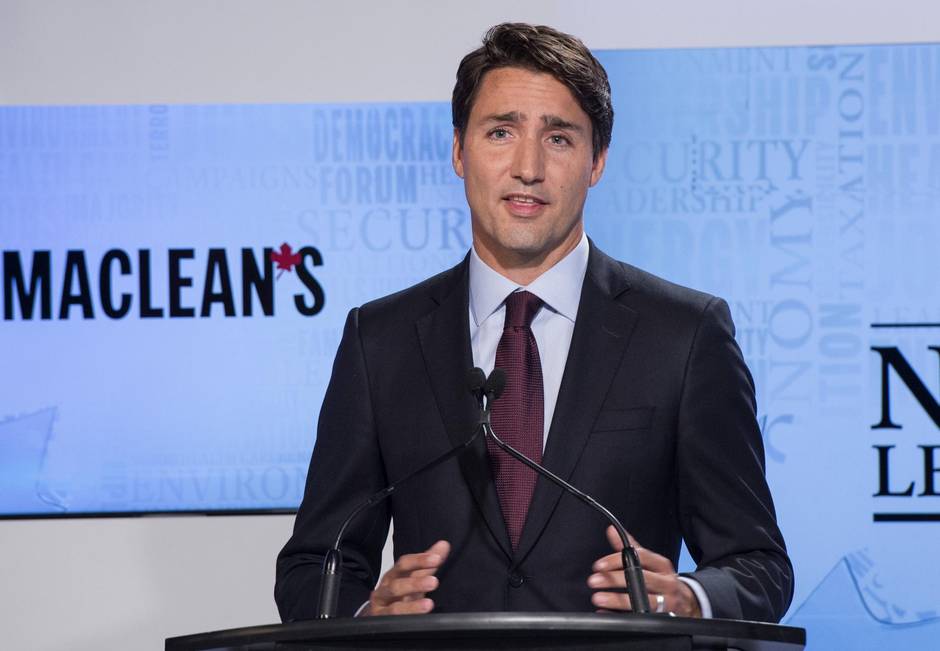 Trudeau: “I’ll give you a number. Nine.”

Mr. Trudeau accused Mr. Mulcair of talking regularly in French about his desire to repeal the Clarity Act, which would require a clear majority on a clear question before Quebec could separate from Canada. That, said the Liberal Leader, would make it easier for sovereigntists to break up the country.

Mr. Mulcair has said he would accept a referendum in favour of separation that achieved the support of 50 per cent plus one Quebeckers.

“Mr. Trudeau has an obligation,” said the NDP Leader. “If he wants to talk about this subject, to come clean with Canadians. What’s his number? What is your number, Mr. Trudeau?”

After a certain amount of back and forth, Mr. Trudeau gave his answer.

“I’ll give you a number,” he said. “Nine. My number is nine. Nine Supreme Court justices said one vote is not enough to break up this country, and yet that is Mr. Mulcair’s position.”

And then it was Mr. Harper’s turn.

“Look, what happened – what happened in 1995 — and we don’t want that to happen again — where they tried to get 50 per cent plus one by invalidating a whole bunch of federalist votes,” he said. “So I do think we have to look very carefully at that if we ever have that problem again, but you know, I think Quebeckers have firmly rejected that.”

Leaders spar on the Senate.

The Conservative Leader acknowledged he cannot empty the Senate entirely.

But the Senate vacancies “will force most provinces – who by the way, almost all of them who have opposed Senate elections and Senate reform – to, you know, come clean with that and explain why those senators aren’t being elected,” said Mr. Harper. “And frankly, I think the longer there are more vacancies, I think it will raise questions about why we continue with the Senate we do.”

Mr. Mulcair was subsequently forced to defend his own position in support of Senate abolition, given that it would require opening up the Constitution and all the difficulties that would entail.

It “would mean sitting down with the provinces and territories,” he said. “Now Mr. Harper has refused to attend a single meeting of the Council of the Federation since becoming Prime Minister. I’m going to hold two meetings a year — one in Ottawa and one in one of the other of the provinces on a rotating basis. I come out of provincial politics. I’m not afraid of sitting down with my provincial counterparts.” 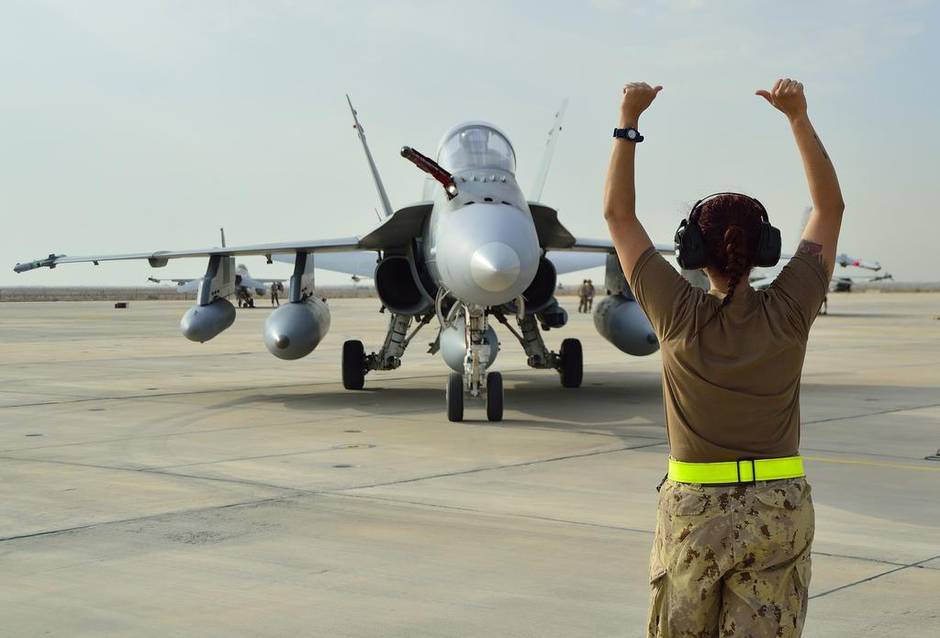 ...and on the mission against the Islamic State.

The mission against the Islamic State is supported not just by Canada’s NATO allies, said Mr. Harper, but by virtually every country in the region.

“The reason they support this is this organization has become the global nerve centre of a violent, jihadist movement that is not only threatening, literally slaughtering hundreds of thousands of people in Iraq and Syria before we intervened, but is a threat to the entire region and a threat to the entire globe,” he said. “It has singled out Canada and Canadians by name, and has demonstrated the ability to carry out attacks in countries like ours. It would be absolutely foolish for us not – not to go after this group before they come after us.”

When Mr. Wells asked Mr. Trudeau to explain the Liberal position, Mr. Trudeau said his party supports the coalition mission, but does not support aerial bombing.