Bruce Anderson is the chairman of polling firm Abacus Data, a regular member of the At Issue panel on CBC's The National and a founding partner of i2 Ideas and Issues Advertising. He has done polls for Liberal and Conservative politicians but no longer does any partisan work. Other members of his family have worked for Conservative and Liberal politicians, and his daughter works for Liberal Leader Justin Trudeau. He writes a weekly digital column for The Globe and Mail.

There's been no love lost among the federal party leaders in this election. There wasn't much there to begin with.

These people are in a tough business. On any given day, far more people are critical of what you're doing, how you're doing it, what you look or sound like, than are giving you a thumbs-up. All of that comes with the territory.

It isn't always that way. From time to time, you see leaders of different parties make a point of a small, friendly gesture to each other. A subtle thing often, but a reminder that even if I've got my foot on your throat, and will finish what I started, it's truly not personal.

Watching Stephen Harper, Justin Trudeau and Thomas Mulcair this campaign has been fascinating.

Justin Trudeau is probably the most naturally gregarious and friendly of the three. But to prove that he's tough enough to handle the job of prime minister, he's had to be right up in the grill of the other two. He's had to endure some hard personal jabs, especially from Mr. Mulcair, and decide to react. Mostly, he's ignored them, but on some occasions, he dropped the gloves and gave as good as he got.

It's hard to imagine that Mr. Trudeau "likes" (in any normal sense of the word) either Mr. Harper or Mr. Mulcair. You probably couldn't like anyone who would say the sort of things about you that they say about him.

But it's also hard to imagine that he loathes his opponents. It isn't apparent in his tone, or his body language. The impression you're left with is that he'd like them to like him, but doesn't really mind that they don't. One of the things that has worked for Mr. Trudeau is that his disposition after months of harsh personal attacks is steady and unflappable. Handling the attacks this way is helping put the lie to "not ready for the job".

Stephen Harper seems the least interested in showing or getting affection from his political rivals. After all, he doesn't seem to care if he feels much love from his own partisans. But the Conservative Leader is savvy. If he won't feign friendly, he knows that he should conceal disdain.

Watching him through these debates has been watching someone with admirable skills at self-control. His exasperation rarely is on display, which means his inside voice is probably hoarse from yelling "you idiots".

The PM has controlled his direct exposure to critics for years – so being forced to endure them for hours on end has to feel miserable, and novel.

But it's clear that Mr. Harper has changed his approach to Justin Trudeau. Careful not to pay Mr. Trudeau too much attention, Mr. Harper knows that derision can backfire. The "he's okay, but just not ready" ads are the least-negative negative ads that Mr. Harper has run against any of his opponents. Whatever Mr. Harper truly feels for Mr. Trudeau, little of it has been revealed in this campaign.

Finally, Thomas Mulcair. Mr. Mulcair wears his emotions on his sleeve, which is one of the reasons he was so powerfully effective in the House of Commons, laying a beating on Stephen Harper and his front bench.

When he's in full rhetorical flight, Mulcair's sneer is frightening to behold. When he bares his teeth after a galling answer from Paul Calandra or Pierre Poilievre, many viewers probably feel he has the tone just right, and put it just the way they would.

But the NDP leader is struggling in this campaign, and one of the reasons is that he's been bouncing back and forth between an uneasy looking uber-calm posture, and an unseemly looking uber aggressive one.

Watching him interact with Mr. Trudeau can leave you feeling stressed. His words may be mostly civil, but his body language often says something more like "I can't believe I have to be on a stage with the likes of you". His shots at the Liberal leader can come off like clumsy swipes, and when they do, the impression left is that Calm Tom is Pretend Tom. People crave authenticity, and it's hard to know who the real Tom Mulcair is at this point in the campaign.

A campaign of this rare length will take an unusual toll on the temperament of the leaders. There's a lot on their shoulders, and their performance is scrutinized for flaws in a manner that would drive most of us around the bend. But with two weeks left on the clock, the pressure is only going to rise, and the personalities and their emotions will be under an ever-brighter, more powerful spotlight. 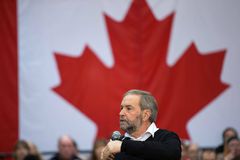 Campaign Notebook: As Liberals take lead, this could be the defining issue
October 5, 2015
Follow us on Twitter @globepolitics Opens in a new window
Report an error Editorial code of conduct
Due to technical reasons, we have temporarily removed commenting from our articles. We hope to have this fixed soon. Thank you for your patience. If you are looking to give feedback on our new site, please send it along to feedback@globeandmail.com. If you want to write a letter to the editor, please forward to letters@globeandmail.com.
Comments