Maxime Bernier is arguably the front-runner in the Conservative leadership race and yet you don't hear much about one key part of his plans: slashing the size of the federal government with a proposal that will require huge spending cuts.

It's no secret that Mr. Bernier wants to shrink government. That's a central theme of his campaign.

Opinion: After 'lock her up': Are there any real leaders among Conservatives?

Explainer: Who's running for the Conservative leadership? Read the list of candidates

They will have to be big. Mr. Bernier is promising deep tax cuts worth $42-billion to $47-billion a year. And he has also promised to eliminate a budget deficit forecast to be at $15-billion in 2021.

That means he has to come up with about $60-billion a year – roughly one-fifth of all government program spending.

Mr. Bernier contends that a large chunk of it would come from economic growth, which, he argues, will be stimulated by his tax cuts. But that would count on a unexpectedly strong economy – and even if his tax cuts were to lead to a boom, they would still force a Bernier government to cut federal spending by somewhere between $20-billion and $40-billion a year.

That would mean cutting at least the equivalent of the Department of National Defence – the army, the navy and the air force – and at the high end, it would be like cutting all federal health-care transfers to provinces, plus the departments of transport and natural resources.

Mostly, Mr. Bernier hasn't identified specific cuts, but in an interview, he said it can be done. "It will be tough decisions, I agree," he said.

He has proposed some policies that will save money, such as getting rid of the CRTC and privatizing Canada Post, but he's not sure how much. "I don't know. I didn't do the math," he said. As prime minister, he would launch a review of government spending, but he can't say yet how much that would yield in reductions, or from which programs.

Mr. Bernier said it's not surprising he has not yet worked out all spending details in a leadership campaign. He said he has put forward more policy than any leadership candidate – and to his credit, that is arguably true. "The principle is there. The cost is there," he said.

But it's the huge cost of Mr. Bernier's tax-cut plans that raise the questions.

He'd start with eliminating the capital-gains tax and reducing the federal corporate tax rate to 10 per cent from 15 per cent. He argues that would be an economic jolt that would stimulate investment and growth. But it would immediately reduce revenue by about $12-billion a year.

Mr. Bernier said he'd pay for that by cutting corporate welfare, referring to a University of Calgary study that identified $16-billion in subsidies. He said he thinks he could eliminate $7-billion to $9-billion in loans and grants to companies and cut regional development agencies, such as the Atlantic Canada Opportunities Agency.

But he hasn't identified how he'd pay for it. His income-tax plan is a bigger version of a Fraser Institute proposal, but the think tank proposed to pay for it by eliminating $20-billion in tax credits. Mr. Bernier points to the same list of tax breaks but would only eliminate a few – "boutique" credits (for example, those for a tradesman's tools) that the Stephen Harper government created "to buy votes." Mr. Bernier said he won't eliminate the big ones on the Fraser Institute's list – politically sensitive credits, such as the age credit for senior citizens, the disability credit and the medical-expenses deduction. It's hard to imagine he would cut even $1-billion worth of credits.

Mr. Bernier said he expects economic growth would pay for half the cost of his income-tax cuts, $15-billion to $18-billion. If need be, he would not introduce those tax cuts till the fourth year of a mandate. Even so, his tax cuts mean he's running on a dramatic shrinking of the federal government. 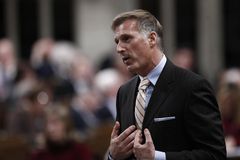 Conservative leadership candidates reject Michael Chong’s carbon-tax proposal
February 19, 2017
Opinion
You don’t speak French? You shouldn’t lead the Conservatives
January 18, 2017
Follow Campbell Clark on Twitter @camrclark
Report an error Editorial code of conduct
Due to technical reasons, we have temporarily removed commenting from our articles. We hope to have this fixed soon. Thank you for your patience. If you are looking to give feedback on our new site, please send it along to feedback@globeandmail.com. If you want to write a letter to the editor, please forward to letters@globeandmail.com.
Comments