Stephen McNeil is a cautious man, but even his closest advisers thought he was taking it too far when he proposed selling an improbable campaign platform that promised no shiny tax cuts, no pricey new programs and no balanced budgets.

His doubters worried this would doom the party. But the Nova Scotia Liberal Leader prevailed, tapping into the latent disappointment among a cynical electorate fed up with politicians and their broken promises.

On Tuesday, Mr. McNeil, 48, won a majority government – the Liberals' first time in power since 1999. It was a stunning triumph for the former small-appliance repairman, the 12th of 17 children from the Annapolis Valley whose mother supported the family by working in an elastics factory after her husband's death – and later became the first female high sheriff in Canada.

In the process, Mr. McNeil vanquished Darrell Dexter and his NDP, which had served only one four-year term. The humiliation was so profound that Mr. Dexter lost his own seat, the NDP was reduced to third-party status behind the Progressive Conservatives, and history was made – this was the first time in 131 years that Nova Scotians did not give an incumbent government a second term.

Lean and lanky, the 6-foot, 5-inch Mr. McNeil is sometimes compared to the late Hollywood actor Jimmy Stewart in the movie Mr. Smith Goes to Washington. This is not only for the physical resemblance, but for the aw-shucks earnestness so apparent in his determination – backed up by what he heard in his travels and by Liberal polling – to sell Nova Scotians on a platform that opponents criticized for containing no actual plans.

In an interview with The Globe and Mail, the premier-designate said he didn't want to come to power and then have to tell the electorate that things were worse than he'd thought.

"Every government says that and people are tired of hearing it," he said. "I wanted to make sure that what I said in that platform, we could commit to."

Tempted though he was to promise lower taxes and immediately balance the books, he resisted – so much so that, in one of its first few acts, his new government will undo NDP legislation passed in 2012 that enshrined in law the reduction of the HST by two points by 2015. Mr. McNeil had campaigned on a promise to restore $65-million in education cuts and not cut the HST until there is enough of a surplus.

And, the day after the election, Mr. McNeil vowed he would not support the Muskrat Falls hydroelectric project, a centrepiece of the Dexter government, if rates are not the best for Nova Scotians. "You can't have it all," he said. "Maybe that's my mother in me. … There are choices to be made."

His mother is often in his thoughts. Theresa McNeil, who died in 2009 at age 81, was a stay-at-home mother who suddenly found herself a widow when her husband, Burt, 45, choked on food at the dinner table. Stephen McNeil was eight at the time.

"It was probably the most defining moment in all our lives. The house was full of kids and the two youngest were 18 months old," Mr. McNeil said, remembering his mother ushering the kids out to neighbours. "When we came home, life as we knew it had changed."

There was no counselling or institutional support – "You just sucked it up and kept moving," he said. His mother went to work at the local elastics factory, found time to volunteer, and was eventually appointed high sheriff of Annapolis County. (That earned her a spot as a mystery guest on the popular TV show Front Page Challenge.)

Her job was to transport convicts to nearby prisons, such as New Brunswick's notorious Dorchester Penitentiary or the medium-security facility in Springhill, N.S. At the time, sheriffs used their own cars, so she drove the Maritime highways with juvenile offenders or hardened crooks in the back seat of her Chevy Impala.

Both parents – his father had been a municipal councillor – imbued in the McNeil children a sense of public service.

Mr. McNeil lost his first attempt to become an MLA in the 1999 election, prevailed in 2003 and became leader in 2007. In the 2009 election, he formed the official opposition – and set out to battle the NDP government that was running ahead in opinion polls.

The party hired David Herle, a senior Paul Martin strategist, whose polling showed citizens were concerned about high power rates and NDP handouts to corporations. They knew they had to act fast: Corporate Research Associates (the biggest pollster in the area) would soon be in the field polling.

Senior adviser Chris MacInnes, who ran Mr. McNeil's campaign and is now part of his transition team, came up with the plan: He pushed for a strategic ad buy, an expensive undertaking when parties are trying to build a war chest. In August, 2012, at the height of the Summer Olympics, the Liberals ran ads bashing the NDP on power rates and help to corporations.

In September, 2012, CRA's quarterly results showed that, for the first time since 2006, a party "other than the NDP has the lead in voter intentions." The poll showed the Liberals in first place. "All I know is that when we were travelling we knew something was happening, long before the election," Mr. McNeil said.

He was right. Something was happening and the new-style politician with the old-style values latched onto it. Now, he said, "I don't think people expect us to get it right all the time, but I do think they expect us when we don't to acknowledge it and then try to move forward." 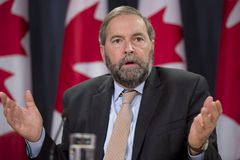 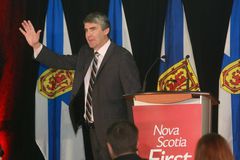 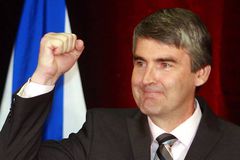