Canada and India are expected to announce Wednesday a uranium supply deal worth hundreds of millions of dollars where Canadian producer Cameco Corp. would provide fuel for Indian reactors.

Sources say it is anticipated an agreement will be announced on the second day of Indian Prime Minister Narendra Modi's visit to Canada. Mr. Modi is spending the day in Ottawa.

The Indian leader hints at the deal in a column written for Wednesday's Globe and Mail, saying "during this visit, our two countries will resume commercial co-operation in civil nuclear energy after decades."

Saskatchewan Premier Brad Wall will be on hand in Ottawa on Wednesday for the visit. He said a Cameco uranium deal would be a jobs boon for his province.

"If there is a deal, it means a great deal. It means a new long-term customer. It means access for Saskatchewan uranium to one of the most robust civilian nuclear programs – access that we have not had to date," Mr. Wall said.

Canada banned exports of uranium and nuclear hardware to India in the 1970s after New Delhi used Canadian technology to develop a nuclear bomb.

The two countries put this behind them with a deal that took effect in 2013. The highly symbolic Canada-India Nuclear Cooperation Agreement demonstrates that Canada no longer considers India a pariah for what it did in the 1970s.

As recently as last week, Saskatchewan-based Cameco and India were in late-stage negotiations on an agreement that could mean hundreds of millions of dollars in revenue for the uranium producer.

"It's momentum for a pretty significant industry in Saskatchewan," Mr. Wall said. "On this one, we did work pretty hard."

India wants to vastly increase the share of electricity it generates from nuclear power, to as much as 25 per cent by 2050.

Nuclear trade between Canada and India has the potential to go far beyond uranium, extending to exports of hardware, too.

But concerns over India's nuclear liability law have worried potential foreign hardware suppliers that fear they could be held legally responsible in the event of a nuclear power catastrophe.

A deal reached by U.S. President Barack Obama and Mr. Modi in January appears to represent a breakthrough on this matter. The leaders agreed the legal liability of U.S. nuclear technology suppliers would be limited. New Delhi would presumably extend this accommodation to other country's suppliers as well.

Nadir Patel, Canada's High Commissioner to India, told an Indian TV network last week the Canadian government was happy to see the deal between Mr. Modi and Mr. Obama. "We're also very pleased that the civil liability issue was resolved during the Obama visit that took place a couple of months ago," he told the Indian Broadcasting Network.

"That also provides greater opportunities to the broader [nuclear industry] ecosystem. It goes beyond fuel. It's into waste management. It's into training and capacity. So those are areas that we are pushing and promoting quite actively and hopefully we'll see the fruits of these efforts," Mr. Patel said.

Major challenges between Ottawa and New Delhi remain even as ties strengthen between India and a country where 4 per cent of the population is of Indo-Canadian origin.

Efforts to make real progress on free-trade talks launched in 2010 have borne little fruit because of an apparent lack of ambition on both sides, with Ottawa cool to the idea of an influx of foreign workers and New Delhi lukewarm on the notion of lifting tariffs.

Canada's nuclear regulator, the Canadian Nuclear Safety Commission, would have to approve any sales agreement by Cameco.

Each shipment would need an export permit.

Indian Prime Minister Modi arrives in Ottawa for start of landmark visit
May 14, 2018 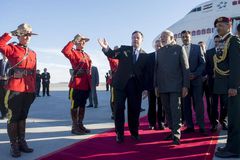