Indigenous Affairs Minister Carolyn Bennett says she is concerned about the progress of her government's inquiry into why a disproportionate number of Indigenous women are murdered or go missing in Canada, but she is not yet committing to extend its timelines.

The slow pace of the Inquiry into Missing and Murdered Indigenous Women and Girls was heavily criticized this week, eight months after its launch, in an open letter to the chief commissioner signed by more than 50 people, including family members of victims, First Nations leaders and advocates. The delays were also highlighted in a report issued on Tuesday by the Native Women's Association of Canada (NWAC) that gave the inquiry a failing grade.

The NWAC report called on the commissioners to report publicly about administrative tasks that remain unfinished and to set deadlines for completing them. The letter said that, now that most of the testimony from family members has been delayed until the fall, it is clear that the time frame for the inquiry is too short and an extension should be requested.

An interim report is due on Nov. 1 and must be written in September to meet translation deadlines, so it is unlikely to include the voices of many family and community members, who were intended to be the inquiry's central focus.

Dr. Bennett, who announced the inquiry just weeks after the Liberals were elected in 2015, told reporters on Tuesday its objective is to stop the violence and help the healing process for people who have lost loved ones.

But when asked whether she would grant an extension as the letter recommended, the minister did not give a direct answer. "It's going to be very important that the commission explain what they are doing and their work plan," Dr. Bennett replied, "and we'll always consider what is best for the families."

The final report of the inquiry is due in the fall of 2018, which would mean it will be wrapped up well before the next federal election.

Both the letter and the NWAC report pointed to a lack of communication from the inquiry to families, the media and others. And both complained that the inquiry's structure has not put the families of victims first or paid enough attention to their needs.

The commission released a statement late Tuesday afternoon, but it did not address the concerns outlined in the letter or the NWAC report. It repeated portions of previous statements to explain its processes.

Some family members, who have been voicing misgivings for months, said they agree a change of pace and direction is needed.

Bernadette Smith, an advocate for families, whose sister, Claudette Osborne, went missing July 24, 2008, said there is frustration that the commission has been duplicating much of the work the government did during a preinquiry phase, and that it has decided to hear from expert panels before family members.

The commission needs to start over and should not be rushed, she said. "We can't be making mistakes," Ms. Smith said. "This is life or death for people and we need to get it right."

Kevin Hart, the Assembly of First Nations' Regional Chief for Manitoba, the organization's spokesman on issues related to the missing and murdered women, said he personally had to deliver information to victims' families "because there has been no information or engagement whatsoever by the national inquiry."

Opposition members say it is time for the government, which set the terms of reference for the inquiry, to take action.

Romeo Saganash, the NDP critic for Indigenous Affairs, said he added his name to the open letter after it was made public on Monday.

"The opinions of so many people are voiced in that letter and in the failing report card that NWAC issued [that] the commissioners and the government cannot continue on the path they have taken," he said. "The time has come for them to say, we made a mistake, we will remedy our errors."

Cathy McLeod, the Conservative critic, said she has grown increasingly concerned about the inquiry's lack of progress.

"The commissioners have to listen to both the letter that they received yesterday and to the Native Women's Association report today, and they've got to correct their tracks because obviously there are some real flaws in terms of what they're doing and how they're moving forward," Ms. McLeod said. "Also, I think the minister needs to be concerned and ultimately is responsible."

Opinion
Globe editorial: Bungled start to missing, murdered inquiry is insulting to Indigenous people
May 16, 2017
Inquiry into missing and murdered women a failure: Indigenous group
May 16, 2017 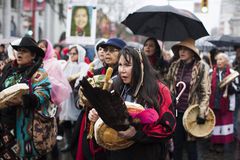 Families fear missing and murdered women inquiry in trouble
May 15, 2017
Follow Gloria Galloway on Twitter @glorgal
Report an error Editorial code of conduct
Due to technical reasons, we have temporarily removed commenting from our articles. We hope to have this fixed soon. Thank you for your patience. If you are looking to give feedback on our new site, please send it along to feedback@globeandmail.com. If you want to write a letter to the editor, please forward to letters@globeandmail.com.
Comments