Governor-General David Johnston heads to Washington next week for a "working visit" to push for greater collaboration on science and innovation, one month before Prime Minister Justin Trudeau's official visit to the White House.

The Prime Minister personally asked Mr. Johnston to attend a conference of the American Association for the Advancement of Science and to meet entrepreneurs involved in high-tech startups.

"I am there for a mission that really focuses on research, innovation, collaboration," Mr. Johnston said in an interview with The Globe and Mail. "I think a lot of the power of the United States in terms of its creativity and innovation is unparalleled."

Mr. Johnston said he and the Prime Minister share a passion for innovation and have bonded personally since the Trudeau family took up residence at Rideau Cottage, a 22-room historic home on the grounds of the 80-acre Rideau Hall estate that is home to the Governor-General.

Mr. Trudeau, his wife, Sophie Grégoire-Trudeau, and their three children moved in to Rideau Cottage after the Oct. 19 federal election while a decision is made on whether to undertake massive renovations to 24 Sussex Dr.

"It's delightful. It's absolutely wonderful. First of all, to have three children who come and play in the garden and we can bring some of our 12 grandchildren here and play with them, which is just lovely," Mr. Johnston said.

Mr. Johnston said his wife, Sharon, has a "wonderful friendship" with Ms. Grégoire-Trudeau. On Tuesday night, Ms. Johnston, accompanied by five of her grandchildren, joined Ms. Grégoire-Trudeau and two of her children at a production of Anne of Green Gables at the National Arts Centre.

Mr. Johnston said he became a friend of Pierre Elliott Trudeau after his retirement as prime minister and while Mr. Johnston was principal at McGill University in Montreal. Their families skied together at the Johnston family chalet at Mont-Tremblant, Que.

"So our five daughters skied with the three sons, and it was just one of those relationships that instilled around children and a very happy one," he said. "We have been friends with them for a very, very long time, and my wife has a wonderful friendship with his wife and they get along famously."

Aside from the family time spent together at Rideau Hall, Mr. Johnston and Mr. Trudeau meet once a month to discuss government affairs, which he also did with former prime minister Stephen Harper.

Mr. Trudeau announced at the World Economic Forum in Davos, Switzerland, last month that he was determined to turn Canada into a high-tech hub and lessen the country's dependency on resources.

Mr. Johnston, the former president of the University of Waterloo, has been a leading advocate of developing a culture of innovation. It's a passion he said he shares with Mr. Trudeau.

"On that theme, we have a passion," he said. "And I think it is important that the country have a passion for that. We must have a culture of innovation."

Canada needs to develop the type of high-tech centres of excellence that the Americans have created in Silicon Valley, along Route 128 in Boston and the North Carolina triangle, Mr. Johnston said.

"We have those areas in Canada, too, but in a more modest way, and I think the more we can emulate the success of the Americans in developing those platforms, the better," he said.

During his Feb. 10-11 visit to Washington, the Governor-General will lay a wreath at Arlington National Cemetery. Vincent Massey was the last Canadian governor-general, in 1954, to visit the cemetery to pay respects to American citizens who served in the Canadian Armed Forces, and gave their lives in the First and Second World Wars and the Korean War.

"I am commander-in-chief of our military, a position which I cherish," Mr. Johnston said. "I will be laying a wreath at the graves of those American citizens who have worn the Canadian uniform in wars abroad, so for me this will be a very solemn and profound moment."

There are no plans for the Governor-General to meet officials from the White House or the U.S. Congress during his visit.

Mr. Trudeau and his wife travel to Washington on March 9 to 11 for an official visit and state dinner at the White House. The last time a Canadian prime minister was given such an honour was in 1997, when then-president Bill Clinton hosted Jean Chrétien. 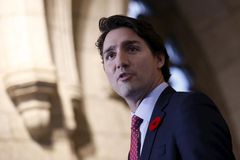 The battle begins for Ottawa's biggest urban overhaul in a half century
March 22, 2018 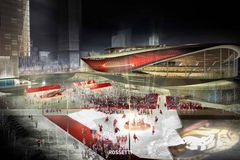