While its allies struck a nuclear deal with Iran, Canada decided to skip the parade. The United States, the European Union, the United Nations will all lift an array of economic sanctions under the agreement, but Canada, at least for now, has no plans to follow suit.

When it comes to Iran, Prime Minister Stephen Harper's government long ago nailed its colours to the mast, as a vocal critic of the regime, sympathetic to Israel's dire warnings, and skeptical of any nuclear deal. This government was never going to suddenly endorse a deal with Iran – it just didn't want to be seen criticizing its major allies in Washington, London and Paris who negotiated it.

Foreign Affairs Minister Rob Nicholson, in a statement issued Tuesday, expressed appreciation for the "efforts" of the so-called P5-plus-one group that struck the deal with Iran – the U.S., Britain, France, China, Russia and Germany. But Canada, Mr. Nicholson said, "will continue to judge Iran by its actions not its words." Ottawa will examine the deal more before changing any policy, he said.

That's unlikely to have much practical impact. Once the UN lifts sanctions as the agreement envisions, "then we're kind of out by ourselves," said Fen Hampson, director of the global security and politics program at the Centre for International Governance Innovation. "It's not going to affect Iran's behaviour, and then it becomes a kind of moral statement."

But it's a statement that reflects the Conservative government's reluctance to embrace any deal with Iran. That's driven by staunch pro-Israel views, domestic politics and skepticism about whether the deal will block Iran's nuclear ambition, but also the fear that lifting sanctions will empower Iran in the Middle East.

The nuclear negotiations with Iran put Mr. Harper into a tricky squeeze between allies. The U.S., Canada's key security ally, wanted a deal, but Mr. Harper has also defined himself as a staunch supporter of Israel, and Israeli Prime Minister Benjamin Netanyahu strongly warned against it. Mr. Harper's government called for stringent conditions on Iran. And when the deal was concluded, Canada's ambassador to Israel, Vivian Bercovici, tweeted in Hebrew the statement that Canada would judge Iran by its actions, not its words.

At home, Jewish community organizations expressed concern, too. The Centre for Israel and Jewish Affairs applauded the Conservative government's "cautious" reluctance to lift sanctions, and suggested other nations follow it. Shimon Fogel said it appears the desire to reach an agreement "trumped" some of what were previously deemed essential conditions for a deal.

Mr. Fogel argues that sanctions should stay in place not only until Iran accepts nuclear inspections "any time, anywhere" and shows it is turning away from key weapons technologies, but also until it stops supporting proxy organizations like Hezbollah and Hamas and interventions in countries like Syria and Yemen. In other words, lifting sanctions is not just about the bomb, but Iran's behaviour.

And, he said, CIJA is concerned that the nuclear agreement includes tens of billions in "signing bonuses" for Iran that will help it expand its influence in the region.

Mr. Harper's government shares many of those concerns. It has always been a vocal critic of Iran's rights record, and its vitriolic anti-Israel rhetoric, and closed the embassy in Tehran in 2012, suspending diplomatic ties. Mr. Harper has labelled the country the biggest threat to the world's security. The Prime Minister hasn't just expressed his concerns about Iran gaining nuclear weapons, but about Iran gaining influence, Mr. Hampson noted. "It doesn't sound like we're going to be setting up an embassy any time soon," he said.

In fact, Mr. Nicholson's statement on Tuesday outlined one role for Canada in this deal: working, through the International Atomic Energy Agency, to verify Iran's compliance. Canada does have significant presence in that kind of nuclear diplomacy, and if there are breaches, Mr. Harper's government will surely seek to play a role in mustering new international will for sanctions.

But if the nuclear deal struck Tuesday is implemented, and sticks, it's hard to imagine that policy lasting forever as the U.S. and Europe lift sanctions, making Canada's own measures futile. In the meantime, Mr. Harper's government is letting the parade go by to make a statement.

Opinion
Iran after a nuclear deal: Where will Canada stand?
July 14, 2015 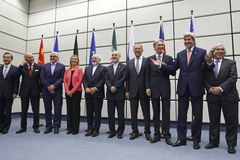