Today is the election. How to vote and what documents you need

On top of everything else, this election is a referendum on pollsters.

In the final week or so, the national numbers have converged: Justin Trudeau's Liberals have the support of more than 35 per cent of voters, putting them on the cusp of majority-government territory. Stephen Harper's Conservatives are at around 31 per cent, more or less where they started. They have failed to persuade many of the Persuadables — the 10 per cent of voters who might consider voting Conservative, but might not. Tom Mulcair's NDP are in the low 20s, having lost about 10 percentage points of support to the Liberals. Voters want hope and change — and youth, it would seem.

If the Conservatives have any hope at all, it's that the polls are wrong, as they were wrong in Great Britain earlier this year, or in previous elections in Alberta and British Columbia. It seems a faint hope. The consensus appears pretty solid.

The Conservatives generally get a slightly higher result on election day than polls suggest, thanks to their committed base. But that base must be disheartened by the prospect of defeat. One question is whether Liberal momentum will tip the party over the edge into majority-government territory. But first they must take away a great many francophone ridings in Quebec from the NDP and a great many southern Ontario ridings from the Conservatives.

Still, it must be said: from 36 seats to the cusp of government is simply remarkable. The Liberal campaign has been nearly flawless. One for the record books. We'll see what kind of government Mr. Trudeau will lead in a few weeks — if, that is, the pollsters are right.

Nanos conducts daily tracking for The Globe and Mail and CTV. A three-day rolling sample of 2,400 Canadians were contacted through phone (cell and landline) from October 16 to 18. The final poll was published at 10 p.m. ET on Oct. 18. The margin of error is 2 percentage points, 19 times out of 20. Click here for full Nanos questions

> Tom Mulcair's final day of the campaign pitched the NDP as the party of change.

> Justin Trudeau ended his cross-country tour with a pitch to B.C. voters.

> A lawyer for Mr. Harper's Prime Minister's Office has broken with the party, saying the party has "lost its moral authority to govern."

No simulation today — we'll find out the real result tonight. Try your hand at our simulator in the meantime.

Overall, the Liberals currently have an 81-per-cent chance of winning the most seats.

LONG AND TORTUROUS, BUT CAMPAIGN GOOD FOR DEMOCRACY

There have been 78 days of partisan sniping, pandering, gimmicks and relentless ads exhausting voters in an election campaign that often felt nasty, brutish and long. But it was an unusually good campaign for Canadian democracy, Campbell Clark writes.

"We are overdue to acknowledge that, for all the griping along the way, the epic span of this marathon proved a blessing for the broader electorate – one that has offered voters a better chance to make an informed choice than they have had in many election cycles." – Adam Radwanski on the election campaign.

Rob Carrick (Globe and Mail): "Tax-free savings accounts, income splitting for families, middle-class tax cuts and $15-a-day daycare should all be on your mind when you factor your personal finances into how to vote today. What you don't need to think about is how financial markets will regard any election outcome that leads to political uncertainty in Canada."

Bruce Anderson (Globe and Mail): "The expected Conservative ad onslaught failed to strengthen their campaign, according to our data, and the last series 'Trudeau is clueless' actually pushed away people who were considering the Conservatives."

Scott Gilmore (Maclean's): "As a nation, we are constantly griping about the 'democratic deficit' and bitterly complaining about the fools in Ottawa, yet, when it comes to doing something about it, we, the people, are the ones letting the country down."

Jen Gerson (Postmedia): "The extended writ period didn't offer a more lofty discussion of the major issues of our day. What we got was a campaign riddled with scandal, division and the ugliest political impulses."

The election is today.

Strong turnout expected in election that may turn on desire for change
October 18, 2015 The final push: How the leaders are spending the last weekend of the election campaign
October 17, 2015
Seven British Columbia ridings to watch closely on election night
October 18, 2015 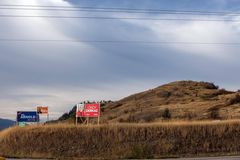