Brian Mason strolls through the aisles of the Old Strathcona Farmers' Market mostly unscathed. Few people are inclined to stop the Alberta NDP leader to talk about the election campaign now under way.

There are some double takes, thanks mostly to the television camera following him and fellow New Democratic Party MLA Rachel Notley. But otherwise, people pass the stocky man with the salt-and-pepper moustache without so much as a side glance and carry on in their search for eggplant and pointed peppers and some of the best sausage you'll find in the province.

"You have to have a thick skin," Mr. Mason says of being the head of the New Democratic Party in Alberta.

And very little ego, it would seem.

Yes, it's not easy being orange in Alberta. Beyond its conservative proclivity, it's a province awash in money. This allows political parties to the right of the New Democrats to make the kind of wild spending promises that one stereotypically associates with them.

On Monday, for instance, Wildrose leader Danielle Smith pledged to introduce "energy dividends" of up to $300 for each Albertan by 2015. Not to be outdone, the Liberals vowed to eliminate – yes, eliminate – university tuition fees by 2025. The Progressive Conservatives, meantime, have already promised to invest $3-billion in energy research.

With political bribery like that, what is a New Democrat to do? Mr. Mason's platform looks positively tepid by comparison – more conservative than the Conservatives. He has promised to fund new daycare spaces, tackle wait times and cap drug costs for seniors. And New Democrats want to regulate electricity rates so they are "as low as possible."

A radical leftist agenda it is not.

Over coffee, Mr. Mason concedes that the party saw the error of its ways in the last election. That time around, the NDP was seen as the enemy of the oil sands. Today, he talks on the campaign trail about cleaning them up – not shutting them down – and refining the bitumen here to create jobs.

"We've toned down the ideology and are focused more on practical solutions," Mr. Mason says.

In a campaign that features two high-profile women in leading roles, it's been difficult for Mr. Mason and his party to establish any kind of media footing. But then, what's new? The NDP leader made the unusual move last week of issuing a news release calling for more civility in the campaign and less name calling – especially among the two front-runners.

"I did that because I couldn't get my message out," says Mr. Mason, who has led his party since 2004. "Every time there was a media availability, all I was asked about was the latest thing Danielle said about Alison or vice versa. It was ridiculous. No one wanted to talk about our policies."

But the bitter fight between the Tories and Wildrose isn't all bad news for the New Democrats. There is a real possibility that vote splits on the right could open up new possibilities for them – especially around Edmonton, which has been kind to progressive parties over the years and remains the NDP's best hope for additional seats.

The amazing charge by Wildrose has, naturally, spawned talk of a minority government. But when the notion of the NDP holding the balance of power in the next legislature is raised with Mr. Mason, he winces.

"I know Danielle Smith has talked about this, but I think it's a mistake on her part," he says. "I don't think people necessarily want a minority government. I think she stands the risk of scaring people." Scaring them into staying with the majority devil they know – the Progressive Conservatives.

Still, Mr. Mason does allow himself to be optimistic – or at least as optimistic as a lefty politician in a politically straight-laced province like Alberta can be. He says in the last federal election, 25 per cent of Albertans voted NDP – the highest number ever.

In addition, he says he's been known to convert the seemingly unconvertible.

"My father, Bob, was a founding member of the Reform party," Mr. Mason says, smiling. "But the last six or seven years before he died, he was a New Democrat. So switching conservatives to the cause has been known to happen." 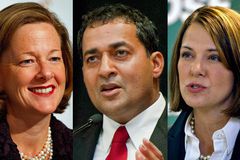 A week in, Alberta election is Wildrose's to lose 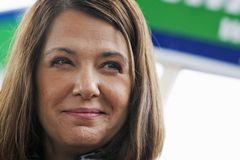 In some Alberta ridings, election is far from a two-horse race 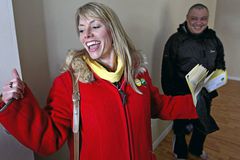 On fertility, Danielle Smith protests too much 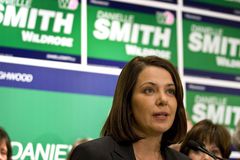 Polls at odds in Alberta election
Alison Redford: A leader on the brink