A federal New Democratic leadership hopeful has pledged to make it party policy to decriminalize petty drug possession if he is elected leader, supporting calls by a growing number of health officials who say it would help lift the stigma around addiction.

Jagmeet Singh made his pledge on Sunday at an NDP leadership debate in Vancouver, a city that had recorded nearly 250 suspected overdose deaths by the end of August. Across British Columbia, 876 people died of illicit drug overdoses from January through July of this year.

"That does not sound to me like a criminal justice problem; that sounds to me like a social-justice problem and a health-care problem. I would call for the immediate decriminalization of all personal possession offences when it comes to drugs, period."

Mr. Singh had been asked about Portugal's approach to drugs – the country decriminalized the purchase, possession and consumption of all psychoactive drugs for personal use in 2001 – and said he would immediately follow suit if elected.

The three other leadership hopefuls varied in their support of decriminalization but none was as committal.

Niki Ashton said, "we should be looking at the Portuguese model" and "moving straight ahead toward full support for harm-reduction measures."

"It's not just about having safe sites. We have to find a way to have access," Mr. Angus said. "I don't know if it's decriminalization or some kind of program to work with addicts who are suffering, who can have safe access to drugs, while putting the investments into other methods to get people off these addictions."

Speaking with reporters after the debate, Mr. Singh added that he has witnessed first-hand how much drug criminalization disproportionately affects already marginalized populations – "so it offends me that we in any way want to continue down a path that's not helping people out, that's not actually making a better society."

The federal Liberal government, which has pledged legalize recreational marijuana by Canada Day, 2018, says there are no plans to decriminalize or legalize any other drugs.

Portugal's policy decriminalizes the purchase, possession and consumption of all psychoactive drugs for personal use, defined as 10 days' worth for an average person.

Those found using appear before a local Commission for the Dissuasion of Drug Addiction, which then considers individual circumstances and can impose a noncriminal sanction such as a referral to treatment or a monetary fine. It remains illegal to manufacture, sell and distribute drugs.

A 2016 report by the European Monitoring Centre for Drugs and Drug Addiction found that fatal overdoses in Portugal fell to levels among the lowest in the European Union, as did new cases of HIV and AIDS among drug users.

Some others, including Vancouver Kingsway NDP MP Don Davies and BC Centre for Disease Control executive director Mark Tyndall, are calling for not only decriminalization but the full legalization and regulation of some drugs. A report released by the BCCDC last month listed decriminalization as an initial goal and full legalization and regulation as a longer-term goal, noting the latter "is necessary to address contamination of the drug supply."

"I don't think that other political leaders have gone anywhere near that, although … that should be the obvious conclusion when many politicians will say that the war on drugs is a failure, like [former federal health minister Jane Philpott]," Dr. Tyndall said.

Don MacPherson, executive director of the Canadian Drug Policy Coalition and former drug policy co-ordinator for the City of Vancouver, said it was "great" that Mr. Singh made such a promise.

"At a time when the overdose crisis is taking such a toll, the real story is how many politicians including the Prime Minister are not talking this way," he said. "It is very tough to defend the status quo – criminalization – at this time but most politicians are by their silence, or opposition to changing our broken drug policy. Decriminalization and how to better regulate these substances should be what we are talking about." 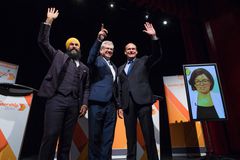 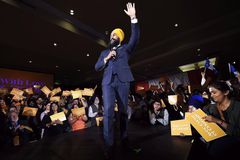