Jim Coutts was supposed to have succeeded Pierre Trudeau as prime minister – that's what insiders say Mr. Trudeau and Mr. Coutts had planned.

But the backroom whiz kid of the Liberal Party, the man they called "the fixer" because of the work he did for two prime ministers, could not win his own seat in Parliament.

So he spent his last years out of the political limelight, donating his time and his money to causes close to his heart and enjoying the rich life he had built for himself.

He had a law degree from the University of Alberta and a master's degree in business administration from Harvard.

But his first love was politics. He was, above all, a devoted Liberal – which was rather unusual for a kid from rural Alberta.

Mr. Coutts was born to Ewart and Alberta Coutts in High River in 1938 and he grew up in a stucco bungalow in the small town of Nanton, a 20-minute drive to the south.

His great-uncle was a minister of highways in the Alberta government of William (Bible Bill) Aberhart.

But his interest in politics was stimulated by Dorothy Dowhan, the editor of the Nanton News and a committed Liberal, who took him under her wing when he was a child and hired him

at the paper when he was in Grade 9.

A former classmate described him as a teacher's pet – someone who always did his homework and stayed out of trouble.

At the age of 15, Mr. Coutts was the campaign manager for Joe McIntyre, a mine manager who ran unsuccessfully as a Liberal in what was then the Macleod riding.

Those who watched Jim Coutts in action said his organizational skills were evident even at that age.

He attended the University of Alberta concurrently with Joe Clark, who today credits Mr. Coutts with playing "a significant role in the Liberal decision to bring down my government in a budget vote in December, 1979."

Francis Saville, the former chairman of Nexen Inc., was also at the university at that time.

Like Mr. Coutts, he was an ardent young Liberal. And he remembers the two of them driving from Edmonton to Calgary and back again in an evening just to hear Lester Pearson speak at the Palliser Hotel.

"I just felt that the upper thing in his mind was politics and probably being prime minister would have been included in that," Mr. Saville said.

"But I thought of him more as a very able backroom guy. And that's what he was. It never worked when he ran himself."

The first of three times that Mr. Coutts suffered a personal political defeat was in 1962, at the age of 24, when he was the Liberal candidate in Macleod.

He did not even place second in that race. But his loyalty to the party caught the attention of the Liberals in Ottawa.

Liberal Senator Keith Davey selected Mr. Coutts to be the party's campaign chief during the Alberta provincial election of 1963. Then Lester Pearson brought him to Ottawa to be his appointments secretary.

For two years under the Pearson government and then for six under Pierre Trudeau, Mr. Coutts was at the right hand of a prime minister.

His mother was less than impressed. When he called to tell her he had been appointed principal secretary to Mr. Trudeau, she asked him when he was going to get a real job.

In politics, he was shrewd and he was tough. And he was a superlative tactician – not that he wanted to be known as such.

"Jim would always come up with something that was unique and different and off the top. And usually he was right," says former senator Jerry Grafstein, Mr. Coutts's long-time friend and Liberal cohort.

"He was a thinker and he prided himself on being a thinker. The thing that he hated the most was people thinking of him as an influence guy, as a fixer. He did not like that because he believed in policy. He believed in ideas."

But there was no denying the skills he brought to the Prime Minister's Office. It was said that no one got to Mr. Trudeau unless they got through Mr. Coutts.

"Everybody thought they should have their half-hour each day with the Prime Minister and that's just not the way it worked," he said in a 1984 interview with The Globe and Mail.

Mr. Coutts professed at that time to be nonchalant about the influence he had in Ottawa. "Being the second-most powerful man in the country didn't mean anything to me. I'm not being 'gee whiz' about it, but it's true. I had some clout, but others did too."

Jim Coutts, however, was at the top of the pecking order inside the PMO.

Mr. Grafstein remembers being invited to dinner at 24 Sussex Dr. after Mr. Trudeau and the Liberals had won the 1980 election. Mr. Coutts and four other insiders were also there.

When Mr. Trudeau asked what they thought should be the top item on his agenda, Mr. Grafstein proposed repatriating the Constitution.

"And Trudeau turned to Jim and the both of them nodded. They had already discussed this," Mr. Grafstein said. "It was just Jim and Trudeau doing their thing, which was to listen to other people and see what they were going to say."

Mr. Trudeau was so impressed by Mr. Coutts that he pegged him to be the next leader of the country, Mr. Grafstein said.

To that end, Mr. Trudeau appointed Liberal MP Peter Stollery to the Senate in 1981 so Mr. Coutts could run in Mr. Stollery's riding in Toronto.

It was considered to be a safe Liberal seat. But the voters did not appreciate having their MP picked by Ottawa, so they elected New Democrat Dan Heap instead. And when Mr. Coutts tried again in 1984, they rejected him a second time by an even greater margin.

Hugh Aird, the son of former Ontario lieutenant-governor John Black Aird, met Mr. Coutts in the early 1960s, when the young political staffer travelled every weekend from Ottawa to Toronto to spend Sunday afternoons watching football with his father and eating roast-beef dinner with the family.

"No one expected it. It was a shock more than anything else. It was certainly a shock to us and I assume it was a shock to him as well," said Mr. Aird, who remained close to Mr. Coutts throughout his life and who named him the godfather of his son (Mr. Coutts never married but had more than 17 godchildren).

"I don't think he ever got over anything. He had a memory like an elephant. I think it hurt him a great deal."

Mr. Coutts withdrew from political life. "That's not to say people didn't seek his counsel on things, because they did," Mr. Aird said.

"But he certainly didn't play an active role. He was far happier walking his dog, and doing the philanthropy and seeing his friends."

Mr. Coutts went into business and ran a successful company that sold explosives to the mining and road-construction industries. He gave that up several years before he died to focus on philanthropic endeavours.

He was the founder and chairman of the Lester B. Pearson United World College of the Pacific Foundation Board, a co-founder of the W.O. Mitchell Literary Prize for Writers and Mentors, a director of the board and foundation of Toronto's Hospital for Sick Children, and a national chair of the Nature Conservancy of Canada. He donated his family homestead and more than 300 works of art to the University of Lethbridge in Alberta.

And he loved his friends.

Conrad Black, who was close to Mr. Coutts for many decades, remembers him as someone who was "rather cynical in his methods but extremely principled in the way he treated people as individuals. He was always quite generous with people and rather good-natured. But politically, in tactical terms, he was a hardballer. It was not, in my experience, a frequently encountered combination."

Mr. Coutts was also a "hilarious raconteur," who did imitations that were side-splittingly funny, Mr. Black said.

"He was kind of a bon vivant in his way," he said. "I don't recall him having any romantic involvements of any kind, but he ate well and he lived well. And, as far as I could see, he was never more relaxed and spontaneous than when he was in very opulent surroundings such as when he used to visit Paul Desmarais and me in Palm Beach. He blended right in there with the international rich, who are kind of an acquired taste."

"He was a great Liberal and a great Canadian," Mr. Chrétien said. "And he was quite an entertainer when he was out of the office."

Mr. Grafstein prefers to describe his friend Jim Coutts as "a lover" of what was good in life.

He leaves his sister, Jean Moore, and many nieces and nephews. 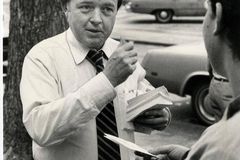