Jim Prentice is the new leader of Alberta's Progressive Conservative Party, after winning more than three times as many votes as his two competitors combined.

Mr. Prentice spent much of his 20-minute acceptance speech acknowledging many Albertans have lost trust in the Tories and promising to clean up the party's problems.

"My election of the leader of this party marks the beginning of a commitment to integrity and acceptance of responsibility in this province," he said at the leadership convention Saturday evening in Edmonton. "And Albertans expect excellence and they expect performance from those who are in positions in trust. And they will not accept excuses.

"And this must apply, ladies and gentlemen, to the government of Alberta, but first and foremost it must apply to our party."

The provincial Tories have been in power for more than 40 years, and has, in recent years, posted a string of deficits. Former premier Alison Redford resigned after critics argued she used government planes inappropriately and her expenses were lavish.

"Over time, the government has lost its way," Mr. Prentice said. "And watching from afar, I was as disappointed and as frustrated as anyone. I wasn't at the table when those decisions were made, but I am at the table now.

"I will restore a commitment to fiscal prudence and ethical conduct in Alberta," he said. "I will enforce the rules and I will make tough choices when they need to be made and stand by them. And I will provide the kind of principled leadership that Alberta deserves."

Mr. Prentice garnered over 17,000 votes. Ric McIver collected 2,742 votes and Thomas Lukaszuk amassed 2,681 votes. Mr. Prentice does not hold a seat in Alberta's legislature, although he spent six years in Ottawa and held senior cabinet positions. A by-election, he said, will be coming soon. At least one politician, former Edmonton mayor Stephen Mandel, said he would consider running for a seat in the legislature under Mr. Prentice's leadership.

Mr. Prentice asked his leadership challengers and their volunteers to join him in "rebuilding" the PCs.

"We will be governed by a test of loyalty for our party and a commitment to support each other."

Mr. Prentice won on the first ballot and was the contest's front-runner before he even officially tossed his hat in the ring. Mr. Lukaszuk and Mr. McIver did not address the crowd at the convention.

Mr. Lukasuk did, however, comment on Twitter. "I did my best under the circumstances... I will continue to serve Albertans any way I can," Mr. Lukasuk wrote in response someone who spoke positively about him.

Mr. Prentice, who raised more cash during the campaign than his competitors combined, is now known as the premier-designate.

Mr. Prentice's critics are trying to use his federal experience against him. They argue his time in Ottawa means he is out of touch with everyday Albertans and the province's challengers. Mr. Prentice, in his speech, talked about growing up in Alberta's coal mining towns and breaking rock 16 hours per day. He talked about how the leadership campaign took him to rodeos, ranches, roundtables, and auction markets. His federal experience did not make the highlight reel Saturday night.

Dave Hancock, the MLA for Edmonton-Whitemud, is Alberta's interim premier. He took over when Ms. Redford resigned this spring. 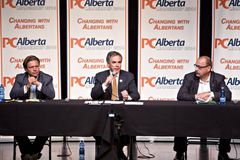 Why Jim Prentice is unfamiliar to average Alberta voters
September 5, 2014 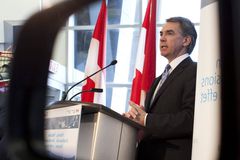 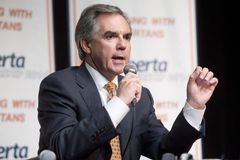 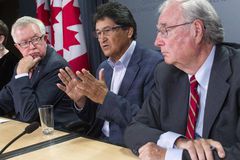