"We cried when they cried. We laughed when they laughed." Justice Murray Sinclair is reaching the end of a very long journey, with his own personal share of pain, and with a challenge for all non-native Canadians.

Reconcile with the First Nations among you, share sovereignty over the land – or watch as that sovereignty is taken from you.

Over the years, Manitoba's first aboriginal judge has been involved in proceedings that would test anyone's spiritual strength: a commission on aboriginal justice in Manitoba; an inquest into the death of 12 infants at a Winnipeg hospital; and the Truth and Reconciliation Commission, which over six years heard from more than 7,000 survivors of mental, physical and sexual abuse at residential schools.

Perhaps the most wrenching moment came when the TRC, as it's called, was well under way. Mr. Sinclair's elderly uncle asked to see him. The uncle had been to a residential school with Mr. Sinclair's father, who had abandoned Mr. Sinclair when his mother died – he was only one year old – descending into a life plagued by alcohol, mental illness and homelessness.

The uncle, who had been sexually abused at the school, "made a passing remark that my father had experienced the same kind of abuse he had experienced. I was caught a little off-guard by that," said Mr. Sinclair, in the calm, measured tone with which he describes any situation. He now believes that this father's demons arose from that abuse.

Mr. Sinclair's grandmother, who knew something of what had happened, pulled her children out of the school and left the reserve. Later, she took over the raising of her grandchildren, and she raised them well. Mr. Sinclair was class valedictorian at his high school (and athlete of the year), went to university and law school, specialized in aboriginal issues as a lawyer and was appointed in 1988 to the bench.

He was a natural choice for the commission, which was established in 2008 in the wake of the Residential Schools Settlement Agreement with a mandate to tell the full story of what happened in those schools. But as a father of four children, he found the emotional strain of the inquest into the children who died after cardiac surgery in Winnipeg had left him drained, and he declined.

The original commission, however, fell apart over infighting among the three commissioners, and Chuck Strahl, who was then minister of Indian Affairs and Northern Development, asked Mr. Sinclair to reconsider. The hiring committee needed someone indigenous, familiar with native culture; someone with knowledge of the law, who could write, research and organize.

"Someone who could carry the day," as Mr. Strahl put it. "I think he realized when we came back to him the second time around that there wasn't a long list of people [who met the criteria], that he was top of the list. … It was a pivotal moment in First Nations-Canada relations."

Mr. Sinclair said yes, reluctantly. "He wasn't seeking the headlines. He was properly hesitant, if you will," Mr. Strahl said. "There was some question about whether he could get things on the rails or not, and it turned out we hired the right guy."

The commission heard from survivors and those who had taught them. It took the Conservative government to court to force it to locate and release archival documents. But mostly the commissioners listened and wept and laughed as they chronicled the stories of survivors.

Residential school survivor Viv Ketchum did not appear before the commission, but spoke with Mr. Sinclair at length at a sunrise ceremony. She was impressed by "that grandfather authority figure that he is." Mr. Sinclair is 64. "He has all the empathy that's missing from some other political figures that are involved in this issue."

She left the encounter knowing "that I was being listened to and that I was not invisible."

This week the commission released its first report, with 94 recommendations for achieving a full reconciliation between Canada's native and non-native peoples. The complete report, totalling some two million words, will follow later this year.

Liberal Leader Justin Trudeau has promised to implement every one of those recommendations if he becomes prime minister. Thomas Mulcair promises that an NDP government will negotiate on a nation-to-nation level to prioritize and implement the recommendations. Prime Minister Stephen Harper has been non-committal, as Mr. Sinclair expected.

Of all the recommendations, the one that takes precedence for Mr. Sinclair calls for a new royal proclamation between the government of Canada and the First Nations, which would include implementing the United Nations Declaration on the Rights of Indigenous Peoples. Such a proclamation would strengthen the sovereignty of First Nations, while weakening the authority of federal and provincial governments.

Many Canadians will balk at this, not least because it would grant an effective veto to First Nations over the use of Crown land. There would be very little mining or forestry or fishing without First Nations approval. Nor would oil and gas be extracted or pipelines built. There are 330,000 First Nations living on reserve, in a country of 36 million people.

But "the central truth is that there is a relationship between aboriginal people and everyone who has come here, from 1492 to today," Mr. Sinclair said. "And it will always be a politically volatile question until there are processes and institutions in place that address that."

Many of the people who come to Canada today are from developing nations that were themselves at one time oppressed by colonial powers. "They will be able to say, if we let them, 'I had nothing to do with that, so therefore I don't need to worry about it,'" he said. "But on the other hand, everyone coming here has a responsibility to the future."

That is one reason why the commission wants the residential school experience to be incorporated into school curricula, into citizenship guides, into law and journalism programs, into the very fabric of national life.

And Mr. Sinclair points out that Canada's robust immigration policies may mean that visible minorities could be a majority in 50 years' time. Those who see Canada as a nation founded by French and English settlers and inhabited by their descendants may one day know what it's like to struggle to preserve one's culture and heritage.

Mr. Sinclair is well aware that the Truth and Reconciliation Commission could join all the other commissions and reports and studies whose recommendations have gone unfulfilled, that its two million words could be "consigned to dark spaces on dark shelves in dark corners of dark libraries." That is why the commission wants to see a National Council for Reconciliation established to monitor implementation of the report.

"Everything we do going forward should be based on the question of how we achieve reconciliation," Mr. Sinclair said. And he does mean everything: every action by every government, at every level, including municipalities.

And for those who would shrug off such demands, the good judge has an observation: For three decades, since the Charter of Rights and Freedoms was adopted, the Supreme Court has been incrementally affirming and expanding the sovereign rights of First Nations. Mr. Sinclair is only one of many who believe the courts are warning Ottawa that it must meaningfully negotiate a relationship with Canada's aboriginal people or have that relationship imposed by the court.

Would that relationship include a constitutional right of First Nations to a veto over the use of Crown land? "I don't see how they could advance that issue any further without taking that step," he replied.

For now, Mr. Sinclair is concentrating on wrapping up the commission's work, which includes shepherding that final, multi-volume report into print. Then he must decide if he wants to go back on the court.

This is unlikely. To be a judge is to be silent outside the court, "and that would be a real challenge," Mr. Sinclair confessed. He might retire and advocate for native rights full-time. And "there's a book that might pop out of my head."

Murray Sinclair, it appears, is just getting started.

With a report from Kristy Hoffman 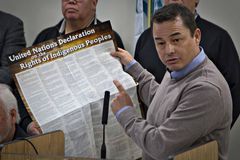 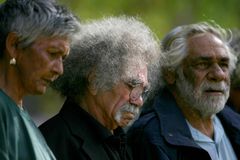