Justin Trudeau has just broken this election campaign wide open. His Liberals have chucked the balanced-budget pledge, at least in the short term, to promise economic growth instead. And now Mr. Trudeau gets to offer a different economic policy.

It makes the Liberals the interventionist party, the only party willing to tell voters they'd spend substantially more in the short term in a bid to get a slow economy rolling.

It's in part an effort to outflank NDP Leader Thomas Mulcair, who won't make those kinds of promises. Many Canadians want a more interventionist approach: A Nanos Research poll released Wednesday found 54 per cent say they support a new round of deficit spending to boost the economy.

But it is a big gamble with a charged political symbol, the deficit. Mr. Trudeau is walking right into Conservative Leader Stephen Harper's accusation that he'd increase the national debt. Still, the economy is the issue, and the Liberal Leader has altered the election equation.

Until now, all parties had accepted they were constrained by more or less the same shackles: balanced budgets, and roughly the same tax rates, give or take a small shift of the burden toward one group or another.

That meant big money wasn't available. Parties could shift a few billion dollars around, and then claim their child benefits or child care or tax breaks were the best plan. But one major option – using the federal treasury in a bid to boost economic growth – was more or less off the table. It takes billions and billions to have any real hope of nudging growth in an economy the size of Canada's.

Now, Mr. Trudeau has thrown off the restraints and said he'll run deficits of up to $10-billion a year for three years in order to allow for a multibillion-dollar increase in spending on infrastructure, raising it from $5.1-billion to $10.2-billion next year. He's gone where no other leader will go.

Mr. Harper won't embark on stimulus spending. He'll attack Mr. Trudeau's plan as a reckless proposal to indebt the country. But he has accepted the principle of stimulus spending before, running a $56-billion deficit in 2009 to counter recession, amid seven red-ink budgets. Still, Mr. Harper argues stimulus isn't needed now. His brand is fiscal restraint, and that's what his supporters expect.

Mr. Mulcair won't go there, either. And that's even though some of his supporters would normally expect it. He has decided he must reassure voters that NDP economic policies are moderate, so he's promised not to alter tax rates, apart from raising corporate taxes, and he's pledged no deficits.

That has also boxed in the NDP Leader. The New Democrats have also talked about the need for policies that stimulate growth. But without money, they've been confined to a few modest measures such as lowering small-business tax rates.The NDP has also proposed increasing infrastructure spending – but it's a fraction, one-fifth, of what the Liberals now promise.

Mr. Trudeau is trying to do to Mr. Mulcair what Kathleen Wynne's Ontario Liberals did to Andrea Horwath's NDP – outflank them on the left. In this case, Mr. Trudeau isn't promising the same social programs as the NDP, such as subsidized child care, but he is accusing the New Democrats of "austerity" plans that would prevent them from paying for those promises.

But the key question remains the economy, and Mr. Trudeau now has a distinct offering: stimulus spending to boost growth.

It is still a major risk. Canadian politicians have, since the budget was balanced in 1997 after decades of deficits, usually pledged to keep the budget in the black or, after the financial crisis of 2008-09, explain how they will bring it back to balance quickly.

For most economists, the current deficit debate is pretty weak tea. When compared with a $1.9-trillion economy, there's not a huge difference between a surplus or deficit of a few billion dollars over a few years.

But deficits are a politically symbolic issue of discipline: If you can't balance the books now, is it a sign you would let the country slide deeper into debt?

Mr. Trudeau has taken a big risk in opening up that question. He has been weakened by shots at his leadership and discipline. But it is a risk on a proposal that appears to match the public mood. And he has opened up the campaign by promising the kind of economic intervention his opponents won't match. 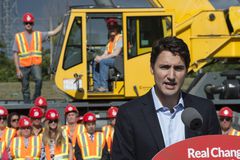 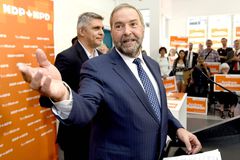