Democratic Institutions Minister Karina Gould is about to become the first federal cabinet minister in history to take a maternity leave.

Gould is expecting her first child in early March and will go on leave until at least May after the baby is born. Treasury Board President Scott Brison will assume her cabinet duties in her absence.

"I look forward to joining other new parents in the House of Commons who prove each and every day that it is possible to have a career in politics and start a family," Gould said Friday on Twitter.

Gould will be in the House of Commons next week before returning to her home in Burlington to await the arrival of her baby, a spokeswoman said. She will work from home and stay on as minister until the baby is born, at which time Brison will take over.

"Part of encouraging the next generation of young women to run for office is demonstrating that our institutions are modern, family-friendly, and that the experiences they bring to the table will contribute to their success," Prime Minister Justin Trudeau said in a statement.

Trudeau has left it up to Gould to decide when she will return, the spokeswoman said.

MPs and cabinet ministers do not pay into employment insurance and don't officially qualify for maternity leave, but can work out an arrangement with their party leadership to take time beyond the 21 days of medical leave afforded any MP.

Gould may be the first cabinet minister to ever have a baby in office, but the way was paved by female MPs long before her.

In 1987 — coincidentally, the year Gould was born — Liberal Sheila Copps became the first sitting MP to give birth. A little over a decade later, NDP MP Michelle Dockrill became the first MP to bring her baby into the House of Commons for a vote.

In 2012, NDP MP Sana Hassainia found herself in the spotlight after Speaker Andrew Scheer appeared to order her three-month-old son out of the chamber so a vote could take place. It turned out to be confusion caused, in part, by the oohing and cooing of MPs over the baby that was disrupting the vote process.

Scheer — who has since become leader of the Conservatives — later clarified he wasn't barring babies from the Commons.

As the average age of MPs in the House goes down, and the number of women seeking and winning public office grows, the number of Commons babies is on the rise: at least seven other women have had children as members of Parliament in the last five years.

Many have only taken a few days or weeks before returning to work. NDP MP Christine Moore had her first child during the 2015 election and was campaigning again in just days. She took three weeks off after the birth of her second child.

Last fall, fellow NDPer Niki Ashton became the first Canadian to run for a party leadership while pregnant. Her twin boys were born in November and she returned to work in January.

Gould has previously expressed surprise that no cabinet ministers had been pregnant while in office, but the statistics may help explain it. Only 60 women have held a federal cabinet post in Canada since Confederation — of course, women couldn't even run federally until 1921, 54 years after the first Canadian Parliament was formed.

The first woman wasn't appointed to cabinet until 1957.

What some have called "mom-mentum" on Parliament Hill is driving Gould, Ashton and others to demand changes to make the place more friendly to women with young families. 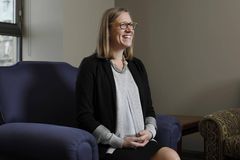